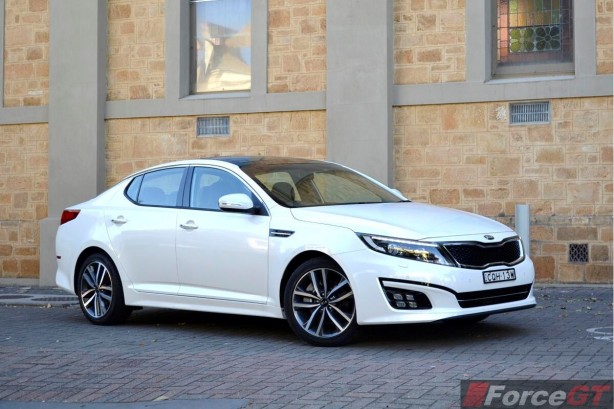 When it was first launched in 2011, the Kia Optima was a game changing model not only for the once cheap, and well…. not much else really, Korean brand, but for the segment it competes in. It brought style to the affordable mass market mid-size sedans and with it, confidence to the ambitious marque.

Its coupé-like silhouette and high-level of equipment quickly gained favours amongst the buying public.

Now, the car has come in for a mid-life update to freshen it up for a few more years. More importantly, the Optima debuts Kia’s first Blind Spot Detection System and Rear Cross Traffic Alert safety technologies in Australia.

Three models are on offer, with the Kia Optima Platinum and SLi joining the Si. Prices start from $30,990 plus on-road costs for the entry level Si and tops out at $40,490 for the Optima Platinum with Navigation tested here.

All are powered by a carried over 2.4-litre four-cylinder direct-injected petrol engine married to a six-speed automatic driving the front wheels. 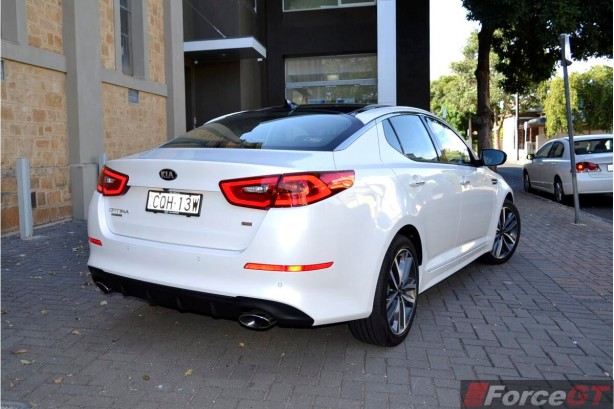 While there’s no denying the slippery shape of the Peter Schreyer-penned Optima is still one of the most striking ones to look at, a few years is a long time in the automotive world. For its mid-life facelift, Kia tasked its Frankfurt-based design team to improve on the vehicle’s front and rear fascia and the brand’s signature ‘Tiger’ nose grille.

The result is a sharper and more upmarket look. At the front, a pod of four LED fog lights dominate the redesigned front bumper. Its LED daytime running light is now integrated neatly into the headlight assembly, in line with other Kia models. 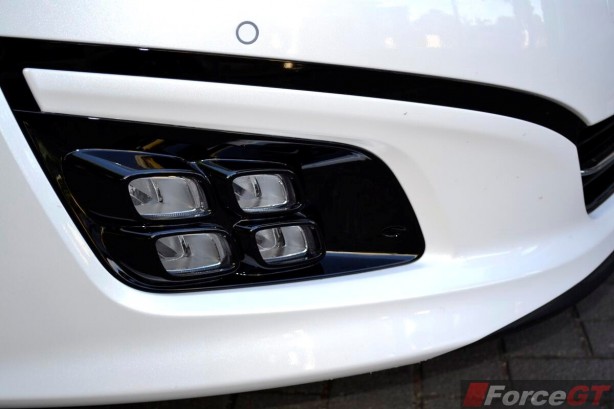 At the back, its bold stance is further accentuated by the restyled rear bumper with rear diffusers that are flanked by a pair of oval tail pipes. The Optima’s boot lid has also been revised and now incorporates a functional aerodynamic lip.

Inside, the driver is greeted by a beautifully designed new steering wheel while the logically laid-out dashboard, boasting high-quality switchgear, gives the cabin premium feel. The bright chrome highlights have been replaced with a classier satin finish while the centre fascia is now finished in high-gloss black. 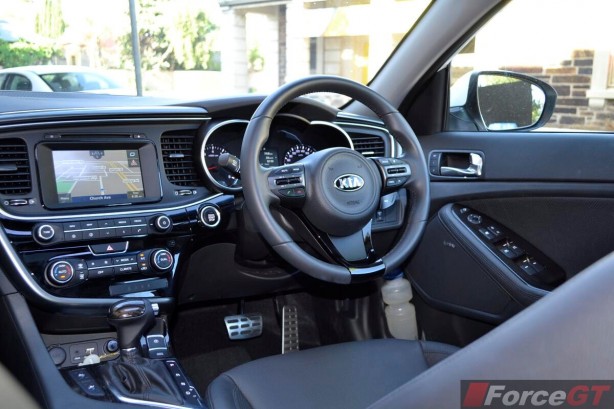 Both driver and front passenger now slide into new front seats with larger side bolsters and additional under-thing support. They will also welcome the comfort of front seat heating and ventilation.

However, both front and rear passengers might find headroom limited due to the Platinum’s headroom robbing standard fit panoramic sunroof.

The Optima’s Holden Commodore-beating 505-litre boot capacity makes it reasonably practical but loses out slightly to sister model, the Hyundai i40’s 525-litres. Its awkwardly shaped bulkhead between the boot and the cabin also makes it a challenge to carry oddly shaped items from IKEA.

Kia’s efforts in improving the Optima’s NVH is immediately obvious, with the cabin attaining premium car level of quietness on the move and remaining hushed on most road surfaces. 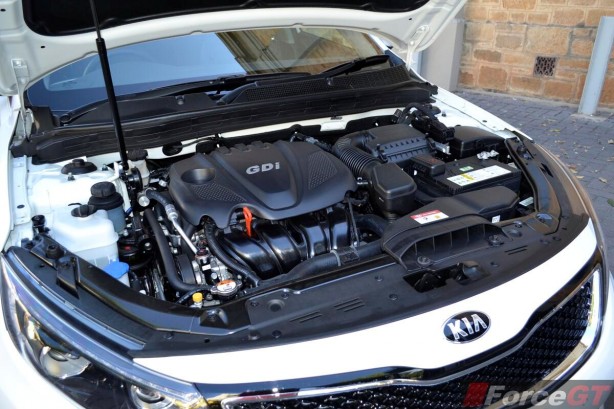 The Optima features a 2.4-litre four-cylinder direct-injected petrol engine that generates 148kW @ 6,300rpm and 250Nm @ 4,250rpm – one of the most competitive naturally aspirated four-cylinders in its class.

Despite the healthy figures, buyers looking for lightning fast acceleration may be disappointed at the Optima’s leisurely pace, accomplishing the 0-100km/h dash in 9.8 seconds (tested). The engine also demands loads of revs to get things moving along. But once on the move, the car is quiet and smooth.

Although it is offered only with a 6-speed automatic transmission, the gearbox is smooth and matches the engine’s character nicely.

The Optima has also eschewed the brand’s artificial FlexSteer system found on other models which brought about an instant round of applause in the ForceGT office. 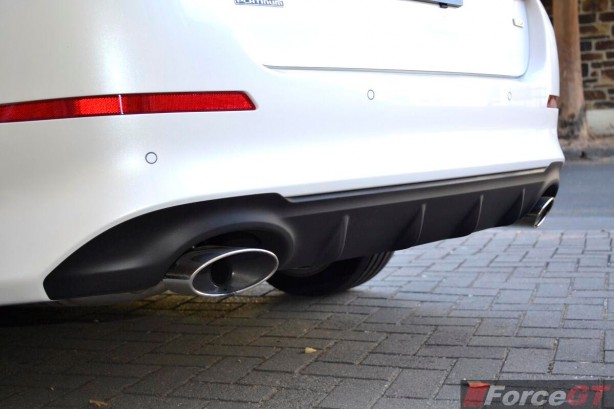 The weightiness of the hydraulic steering invokes a sporty feel at the helm on first acquaintance but its murky on-centre feel soon rear its head. Around the bends, although the steering is accurate, the muddiness becomes even more apparent where accurate placing of the car’s nose proves to be an occasional challenge. At parking speeds, some drivers may find the steering to be too heavy, making parking maneuvers a weighty issue.

Its 225/45 R18 tyres provide good grip on most surfaces, while the car’s front struts and multi-link rear setup does a good job in bustling it along with poise and neatness on the straights – even on the potholes-filled obstacle course that is typical of Aussie blacktops.

Its brakes are also hard to fault, providing reassuring stopping power even after a few hours of hard hammering on a 45 degree day.

What the Optima lacks though, is the level of composure and confidence found in class benchmarks, like the Volkswagen Passat or even the new Honda Accord, where there is a good dynamic blend of responsiveness and compliance. The Kia’s chassis just isn’t as well sorted as some of its rivals, exhibiting some toeyness in tight bends. 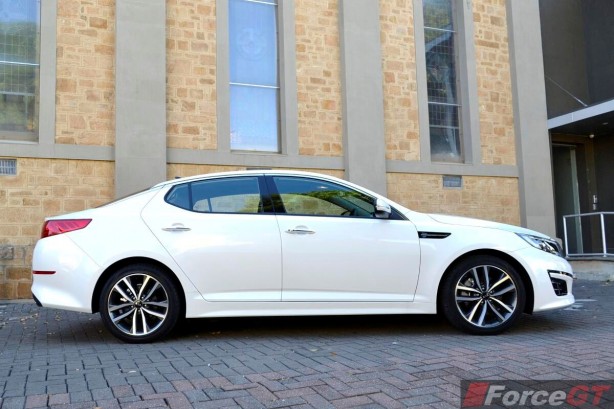 While there is a general solid feel to the slinky sedan, with consistent shut lines and solid sounding doors, there are some uncharacteristic rattles emanating behind the dashboard in our test car.

The dash itself though, is made of classy soft-touch materials. 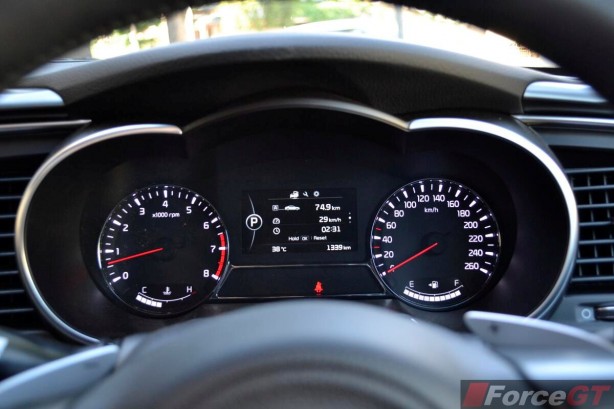 On test, the Kia Optima returned an unremarkable 11.4L/100km of regular unleaded on a mix of city, freeway and spirited driving. That’s over 3L/100km more than Kia’s official fuel economy rating.

While our brutal treatment of the accelerator pedal no doubt has a lot to answer for that, the test car is also brand new, with just over 1,200km on the clock when we picked it up. Once run-in, we expect the figure to drop slightly. 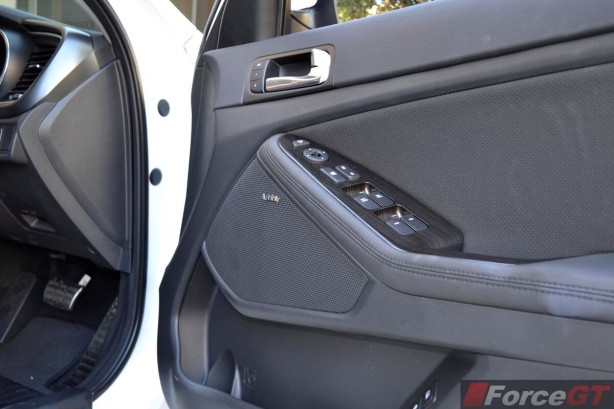 Like all of Kia’s local range, the Optima is very well equipped. As mentioned previously, headlining the comprehensive feature list is Kia’s first Blind Spot Detection system that is standard on the Platinum and it works relatively well. It also gets a radar based Rear Cross Traffic Alert System which monitors traffic from both directions as the driver reverses out of a park or driveway. This is backed up by a reverse camera and front and rear parking sensors.

It is no doubt the Kia Optima is one of the most stylish sedans on our road and the 2014 update has made it look even sharper. Its showroom appeal is further enhanced by the availability of a Blind Spot Detection system.

While it is an accomplished cruiser with a great level of refinement, its dynamics – when pushed – is still below class benchmarks. Its value proposition also diminishes the higher you go in the range.

It’s a shame Kia doesn’t offer the Blind Spot Detection and Rear Cross Traffic Alert Systems even as an option on the entry and mid-range models.