This is the new Lexus NX – to borrow the marque’s own tag line. Arriving fashionably late to the premium compact SUV soiree in a stunningly trendy styling for that eye-popping, Jennifer Lawrence in a sapphire silk Gucci gown effect.

Designed to take on Europe’s best such as the BMW X3, Audi Q5 and Range Rover Evoque, the NX’s unconventional styling is matched by its unique petrol hybrid drivetrain. At least for now. A new 2.0-litre four-cylinder turbocharged petrol will lob in next month to join the NX 300h we have on test here. Unlike its European rivals, Lexus has no plans to put a diesel engine under the NX’s dramatic nose.

The NX 300h range starts with the 2WD Luxury at $55,000, and works its way up to the all-wheel drive Sports Luxury at $75,000. All are powered by the same Atkinson cycle 2.5-litre four-cylinder petrol engine teamed with an electric system consisting of one electric motor in two-wheel drive, and two in all-wheel drive models.

So, can the NX’s driving experience match its arresting good looks? Lets find out… 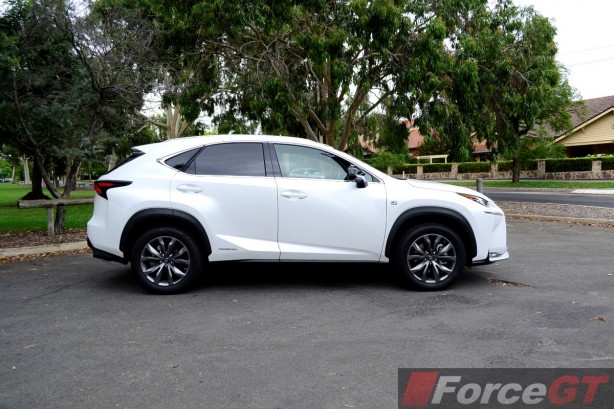 While styling is subjective, there’s no arguing the Lexus NX is one of the most daring designs to come out of the once conservative Japanese premium brand. And we rather like it. Its bold, concept car styling – influenced by the jaw-dropping LF-NX – features one of the most aggressive interpretations of Lexus’ corporate grille, especially in F Sport trim as fitted to our test car. 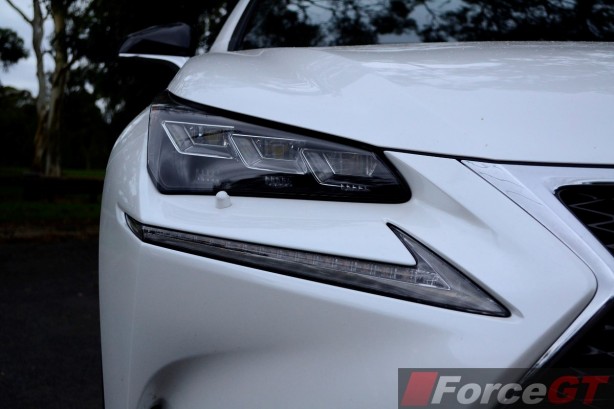 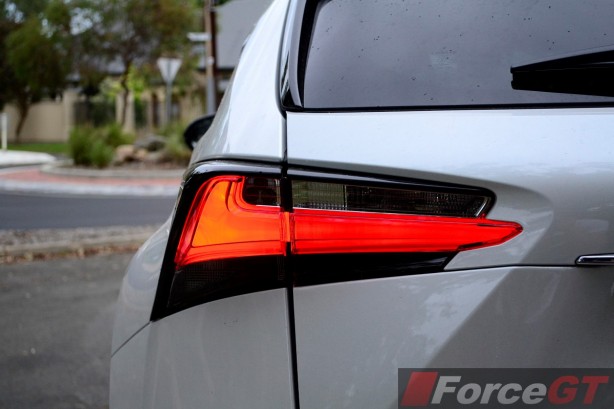 At the other end, the highly sculpted rear hatch is adorned with a pair of striking three-dimensional taillights made up of 10 LED lamps in each unit.

Where the NX’s outlandish design falls down is in the seemingly small standard 18-inch alloy wheels, which fail to fully fill those gaping wheel arches for a properly badass look.

Inside, the car’s cabin gets the same futuristic design treatment, with an angular theme raised climate control panel that is surprisingly ergonomic and within easy reach.

The interior design is refreshingly modern against a sea of Teutonic austere matte black plastic and surfaces. Where the Germans have gone all minimalistic, the Lexus counters with a riot of buttons and technical details, such as the exposed embossed bolts on the centre console, which strangely works! 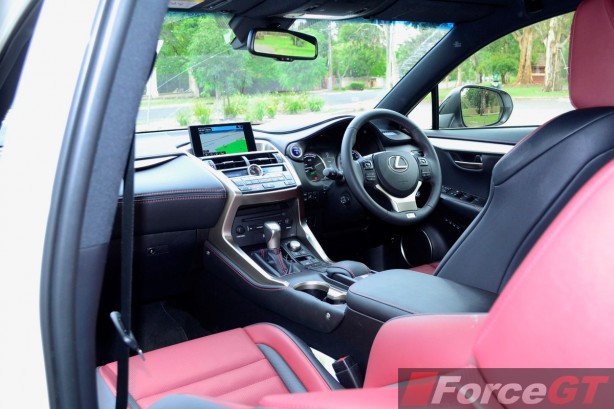 There are some sweet touches, too, like the removable mirror on the centre tunnel and touch-sensitive overhead lighting system that turns the cabin lights on with just a light tap of your finger.

While we can’t fault the interior design and fitment, we find some of the finishes, such as the gunmetal plastic on the centre console and steering wheel, to be average in both looks and feel. 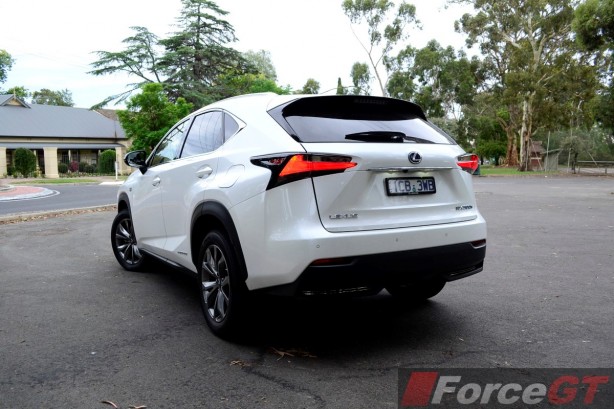 At 4.63m long, 1.85m wide and 1.63m high, the Lexus NX is only a few millimeter shorter in all directions compared to the BMW X3. Its wheelbase, however, is not an insignificant 150mm less than the Beemer.

No surprise, then, that the NX feels a little cozier compared to its rival. But, the Lexus counters with a great driving position and delightfully sculpted, thick-rimmed steering wheel. 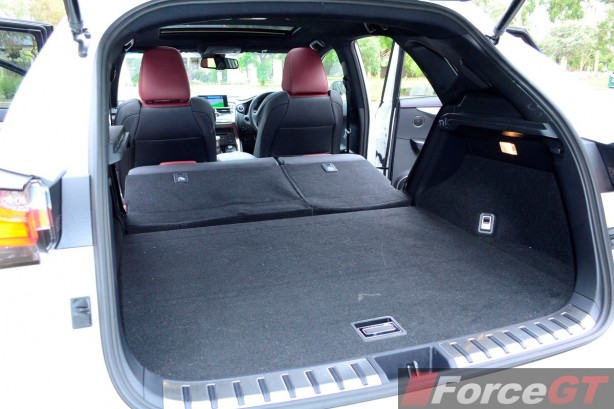 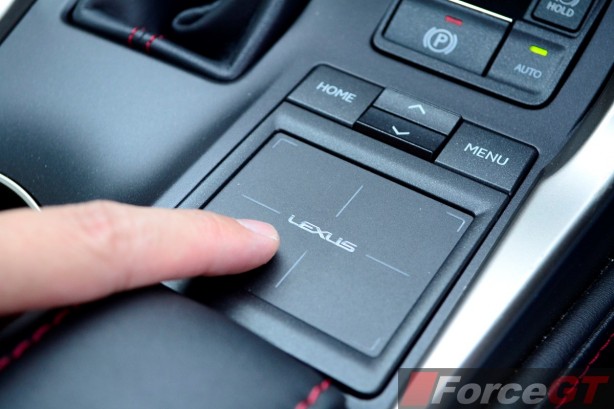 There’s a new touchpad called the Lexus Remote Touch that replaces the old fiddly “mouse” controller, but it still isn’t quite as intuitive to use as the rotary control favoured by – you guessed it – ze Germans!

We also find the graphics for the 6.2-inch infotainment screen to lack the sophistication and crispness of the best in class. Nevertheless, the Bluetooth connected our phones easily, the navigation is effective and the 14-speaker Mark Levinson sound system decent.

All variants, bar the entry-level Luxury, also come with a neat wireless induction smartphone charger housed beneath the front centre armrest that sadly, isn’t compatible with the iPhone (not Lexus’ fault, but Apple wouldn’t play ball).

Lexus boasts the NX has class-leading rear occupant space and that with the rear 60/40 seats folded, its 948mm long luggage compartment also eclipses its rivals. However, a quick check on the X3’s spec sheet reveals the Beemer’s 1,600 litres trumps the Lexus’ 1,520 litres. Despite its plunging roofline and our sunroof equipped test car, rear seat accommodation is acceptable even for taller passengers.

Like most in its class, the NX comes with a space saver spare. While some may find reversing a challenge due to the narrow glasshouse, the standard reversing camera with 360-degree surround view takes most of the pain away. 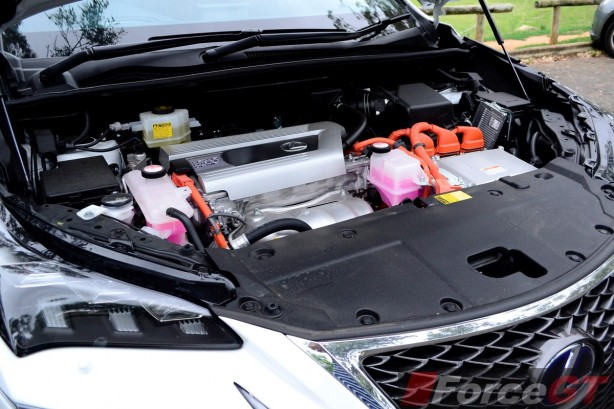 The hybrid powertrain employed in the NX is Lexus’ proven 2AR-FXE 2.5-litre Atkinson cycle four-cylinder petrol engine and a newly developed transaxle consists of an electric motor-generator and an electric drive motor, linked by a double set of planetary gears.

The planetary gear sets simultaneously fulfill three roles – one set as a power-split device between the generator and the front wheels, the second set as a reduction gear for the electric motor and (working together) as an electronically controlled CVT (continuously variable transmission).

The electrons are supplied by a 244.8V Ni-MH battery nestle underneath the rear bench with its own cooling system.

Around town, the petrol engine cuts in and out almost imperceptibly, but the driving experience can be an acquired taste. As with most hybrid/electric systems, the drivetrain can provide a relaxing yet occasionally frustrating ride. Baby the accelerator and the NX will glide along in eerie silence while being propelled by the electrons. 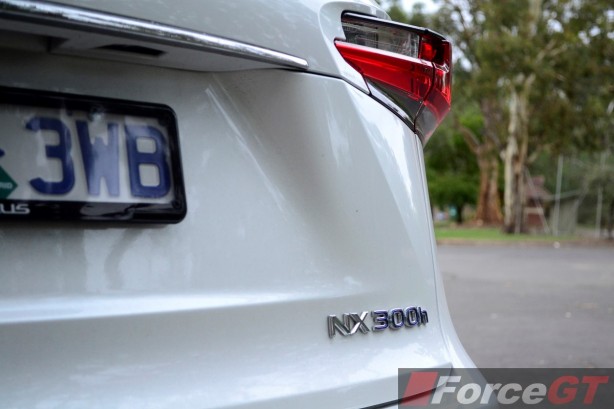 However, when more accelerative power is summoned – such as when overtaking or going uphill – the CVT awakens the petrol engine from its slumber and sends revs spiralling uncomfortably high, resulting in unpleasant drone.

On top of that, the NX is equipped with an Active Sound Control that generates an artificial engine sound based on accelerator angle, but we are afraid it’s like a badly synced foreign movie.

We are left wondering which is worst – that or the CVT induced drone from the engine.

It isn’t particularly responsive either, with a claimed 9.2 seconds to 100km/h from a standstill, while its EV-only mode of approximately 1.6km is poor by current standards and disengages at speeds above 52km/h.

On test, covering over 600km of predominantly urban traverse, the nearly 1.8 tonne NX returned 7.7L/100km – around 2 litres more than its maker’s claim. Not bad for a heavy SUV but not great either. Happily, the Lexus slurps on the less expensive 91RON. 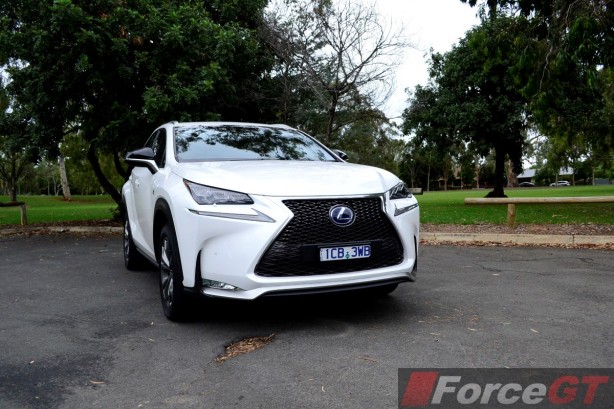 While the Lexus NX may be based on the less expensive Toyota RAV4’s platform, Lexus says 90 percent of it has been re-engineered, resulting in a 20 percent stiffer body.

Significant torsional rigidity has been achieved through extensive use of hot-stamped high tensile strength sheet steel (up to 980MPa) combined with aluminium.

As a result, NX feels composed and planted around the bend. It also feels less nose heavy compared to the X3 we tested recently, and isn’t as eager to push wide like its rival.

Surprisingly, the suspension feels firm even in Eco and Normal settings, lacking that isolated cushy ride some Lexus buyers may come to expect. Twist the dial clockwise to Sport S and the suspension firms up even further (we couldn’t feel the difference with S+), with a corresponding weight added to the steering.

It enables the NX to effectively resist body roll and settles into a corner with confidence. The steering, however, remains vapid and not particularly responsive.

Brake pedal feel is a problem in the NX as well, due to the double duty it serves to recuperate energy while braking and the inherent trait of such system to rob the progressive feel from a brake pedal. 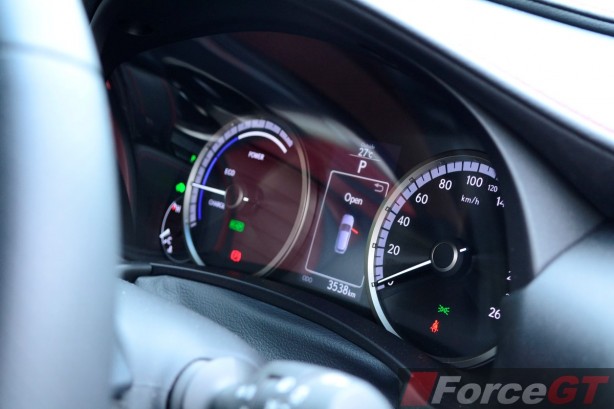 The test car is also equipped with $7,500 worth of options, which brings it nearly up to the Sports Luxury model’s level of equipment. This includes an electric moon roof, 14-speaker Mark Levinson sound system, pre-collision system, adaptive cruise control, Lane Departure Warning, Heads-up Display (that doesn’t disappear in sunny conditions; are you listening BMW?) and Smart Key.

The all-new NX will win over fans with its stunning looks and immaculate built quality. It is decked out like the Versace Hotel inside, with all the mod cons that European marques demand a mortgage for.

It’s super quiet around town and a competent handler around the bends.

However, while the Lexus’ hybrid drivetrain is no doubt sophisticated and efficient in the urban jungle, it is also the NX’s Achilles heels, feeling aloof and detached.

The car’s capable chassis demands a sportier and more engaging drivetrain – something the upcoming turbo-petrol NX 200t might be able to provide.