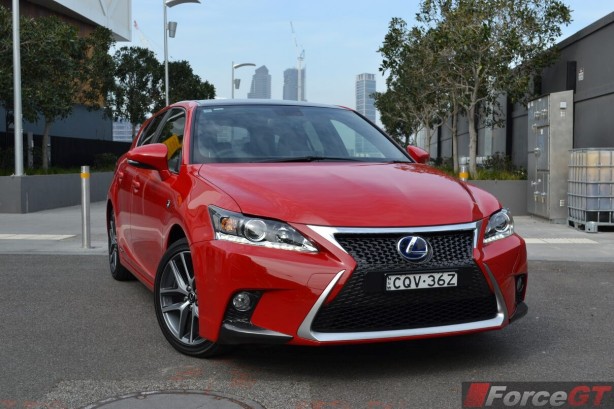 The Lexus hybrid story begins in the 60s, long before the brand was born in 1989, and in an era where Green actually referred to a shade of colour. Parent company Toyota felt the need to find a more efficient, environmental sensitive way to power a car, which led to the development of its first hybrid system.

After several forgettable concepts throughout the late 20th century, a model emerged in 1994 got the motoring world talking. That concept was called the ‘Prius’. It went on sale in 1997, becoming the world’s first mass-production hybrid car.

The Prius went on to become the world’s best selling hybrid car. And subsequently, its hybrid drivetrain was adopted by luxury arm Lexus to create the CT 200h in 2011. “CT” stands for “Creative Touring”, and it’s Lexus economical answer to rivals’ diesel offerings.

Revitalized for 2014, the Lexus CT 200h is given a simplified model line-up to bring it in line with other model range. Gone is the previous model Prestige variant, with Luxury, F Sport and Sports Luxury remaining. The good news is, there is no price rise across the line-up, with the range opener Luxury variant kicking off at $39,990 plus on-roads. The F Sport comes in at $48,990, $2,000 cheaper than the outgoing model. Topping the range is the Sports Luxury at $56,990, a saving of $1,000 over the previous model.

Designed by the same man who is also responsible for the controversial Lexus LF-NX (the concept that spawned the NX crossover), Takeshi Tanabe met with a number of challenges when sketching the CT 200h. As the only model in Lexus’ line-up offered solely as a hybrid, the CT 200h needs to be distinctive, yet a symbol of ECO. Except it is neither of those. Instead, it looks fresh and sleek, and to some extend attractively sporty in F Sport guise (as tested). 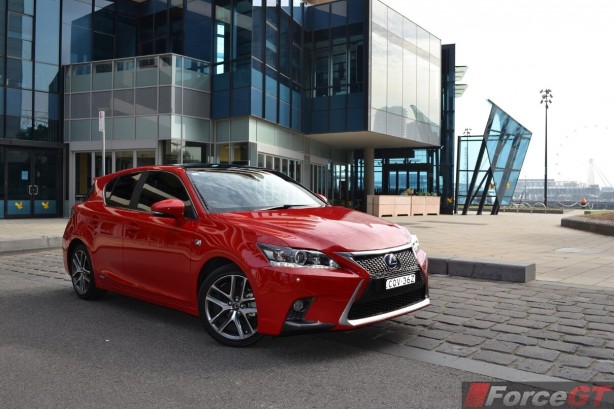 L-finesse design is evident around many parts of the exterior, with the inverted “L” shape C-pillar one of my favourite design elements.

Inside, the CT lives up to Lexus’ reputation for luxury and refinement. The interior is modern and premium, only letdown by the overly cluttered centre console with more buttons than Kanye West’s shirt. For 2014, there are new slimline navigation or display screen, new leather wrapped shift lever and IS-style steering wheel.

The rest of the cabin remains the same, which means front occupants travel in comfortable seats with good space, while rear passengers have slightly limited legroom. There are also no rear air-con vents, which is questionable for a premium hatchback.

At the back, there are 375 litres of boot space. The below average capacity is largely due to the stack of batteries positioned underneath the boot, which also make it shallow.

The pre-update CT already boasts one of the quietest cabins in its class. The 2014 CT is even more tranquil thanks to more sound deadening, a more rigid body shell with improved vibration suppression, and a revised inlet tract that keeps engine noise at bay. At all legal speeds, the CT’s cabin is, without surprise, as peaceful as a church. After all, this is a Lexus. 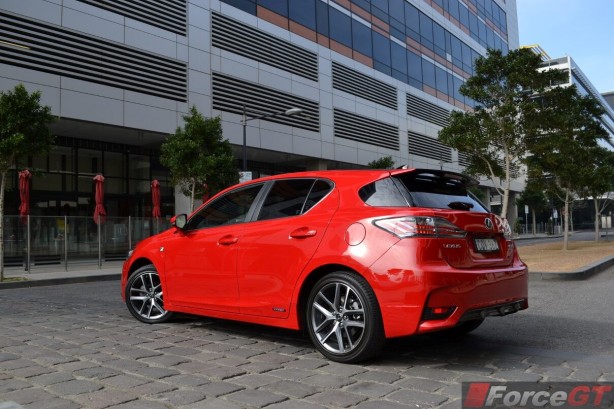 The CT 200h gets the internals of the Toyota Prius – the company’s widely used Hybrid Drive system, consisting of a 1.8-litre four-cylinder 73kW/142Nm petrol engine paired with a 60kW/207Nm electric motor. Combined, they channel 100kW and 207Nm to the front wheels through a continuously variable transmission (CVT).

Compared to other cars in this segment, the CT’s performance is sluggish, even with the drive mode set to Sport. Not surprising as the CT is tuned to squeeze every drop of fuel into kilometre.

It’s not particularly pulsating either when you put your foot down, despite Lexus’ best attempt to inject some sportiness into the F Sport we have on test here. The continuously variable transmission (CVT) further numbs the driving experience. Fortunately, it’s a smooth unit with none of those drones normally associated with this kind of gearbox.

Treat the CT as an economical cruiser and the Lexus starts to make a lot more sense. City driving is both effortless and refined, thanks to the linear torque provided by the electric assist motor. Rolling off in the CT, electricity provides the initial noiseless propulsion during light acceleration. As more power is needed, the petrol engine kicks in so both power sources work together for added acceleration.

The transition from pure electric power to petrol-electric is impressively seamless. There is barely a hint when the engine kicks in. Coupled with the CVT, the drive is amazingly relaxed and smooth. 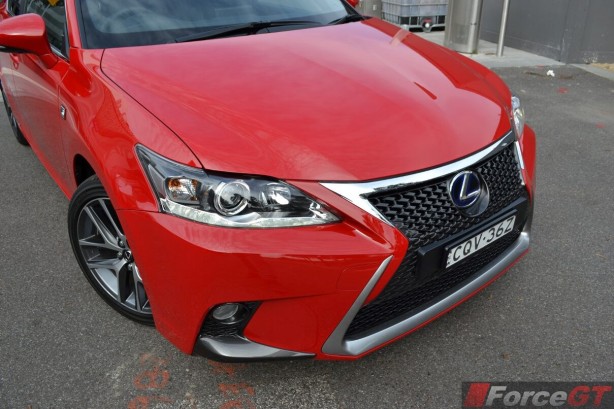 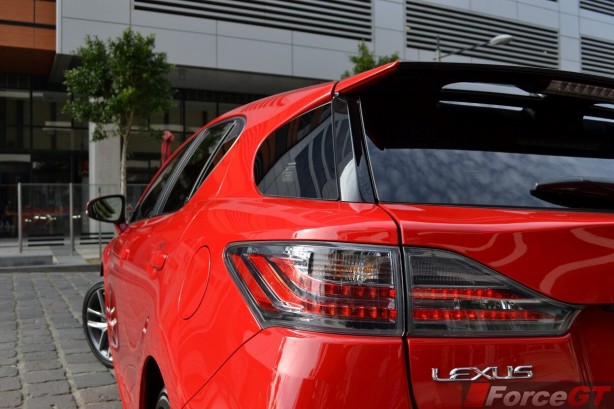 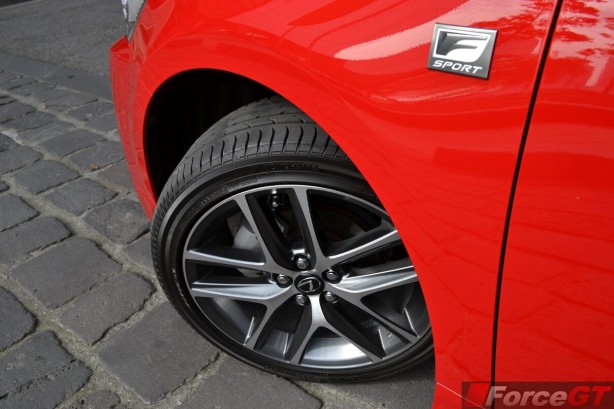 The CT handles well too for a hybrid, especially in F Sport guise. The 2014 model benefits from a stiffer chassis and a re-tuned suspension. Lexus claims the changes have improved the CT’s handling and ride comfort, to which I agree. Turn in is amazingly sharp and there are lots of grip to keep the eco hatch on its intended course. It stays relatively flat and composed through the bends, despite the weight penalty from the battery. The steering is precise, too, although the weightage  is largely artificial in Sport mode.

The standard suspension offers remarkable ride quality, but the firmer suspension setup in the F Sport can make the ride too jittery, depending on road conditions.

At cruising speeds, the petrol engine is the main drive with the electric motor supplementing when more power is called for. Each time you lift off the throttle or apply the brakes, regenerative braking technology harvests the otherwise wasted energy to recharge the batteries. Clever tech, but the trade off is an inconsistent and numb braking feel, as with typical hybrids.

The CT is impeccably built inside out. Doors are well aligned and shut with a reassuring thud. The interior is classy, finished with peerless fitment and premium quality materials on most surfaces. The seats, too, are wrapped in lavish leather.

That being said, the cabin still lacks a bit of glamour compared to other models in this segment. However, the Lexus is sure to triumph its German rivals in one crucial area – reliability. 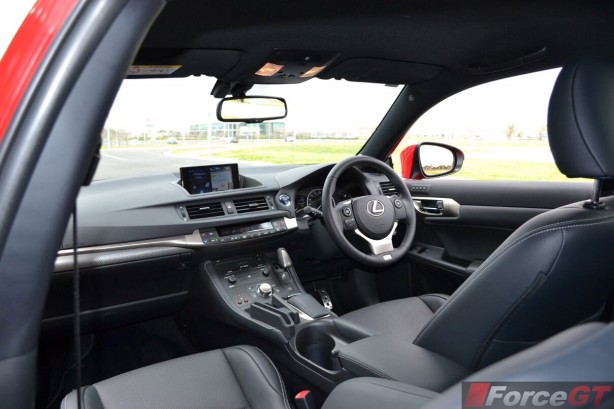 This is where the CT 200h shines. Our week spent with the F Sport returned an average of 5.4L/100km with equal split of urban, freeway and spirited driving. Cruising on the freeway the figure hovers around an impressively low 4.0L/100km.

Is it better than its diesel competitors? The figures are comparable but the Lexus offers slightly better refinement and savings from lower petrol prices compared to diesel in Australia.

Lexus has thrown in more gear in the 2014 CT 200h. Comparatively better equipped than its European rivals, reverse camera is now standard across the range and the base Luxury variant gets ten speakers instead of six for its audio system.

The F Sport and Sport Luxury step up with navigation, digital radio, leather upholstery, heated front seats and Lexus Enform connectivity, which lets you pair a compatible smartphone to the in-car infotainment screen, unlocking access to a suite of apps and services within the car.

The 2014 Lexus CT 200h gets a raft of updates, which makes it an even more compelling choice for those who want a premium hatch with a big dose of style and excellent economy.

Its reluctant hybrid drivetrain may be overshadowed by more potent rivals (time for a 2.0 turbo, Lexus?), but the CT remains a well packaged, dynamically competent and refined hybrid hatch.