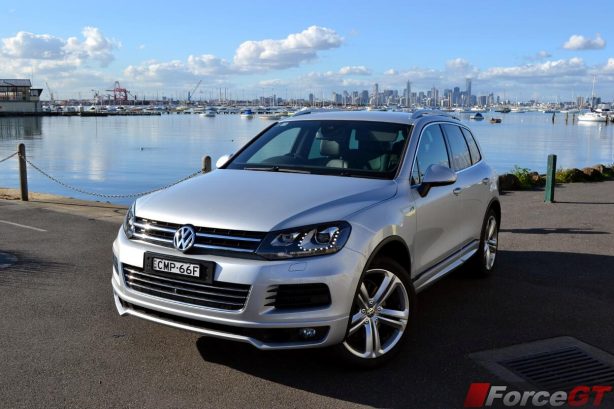 If you are looking to buy the 2013 Volkswagen Touareg R-Line, chances are you are either contemplating if it’s worth the extra $30k over the standard Touareg for a more powerful V8, or if you are better off saving $20k over an Audi Q7 4.2TDI, which is, mechanically the same car.

So, in the name of consumer advice (ahem!), we drove the top-spec Touareg for a week to find out.

Under the bonnet lives a 4.2-litre V8 turbo diesel engine, which is identical to the Audi Q7’s. Its 250kW of power sounds promising but more startling is the monstrous 800Nm of torque, 40Nm more than the Q7’s. That’s more than the BMW X5 M or even the Porsche Cayenne Turbo S! 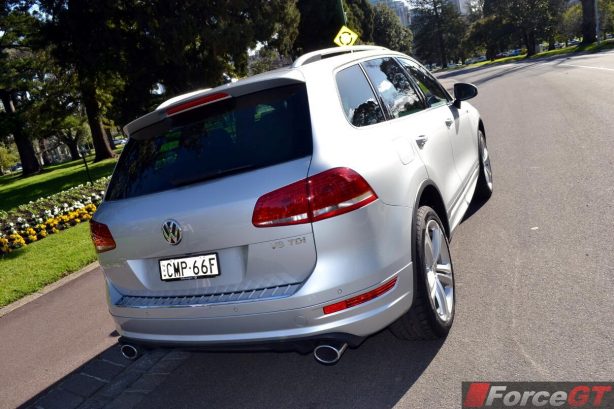 With that massive amount of torque, you would expect the Touareg to erupt in an immense surge of power every time you plant your foot on the throttle. But no, launch the Touareg from standstill and it accelerates without much fanfare. The only sensation of speed you get is by watching the rapidly climbing speedometer, which we don’t recommend doing because 6.1 seconds later you will already be cracking 100 km/h (tested). Keep the throttle planted and it will continue to pull strongly past 160 km/h before reaching a top speed of 242 km/h. Amazingly fast for a 2.2 tonne SUV.

Its sport-tuned suspension, with adaptive dampers, allows the Touareg to carve corners with good composure and body control in Sport mode. This is helped further by those sticky performance tyres and all-wheel-drive torque vectoring trickery. In spite of its admirable capability, don’t expect the Touareg to handle like a sports sedan or coupe. It is impossible to forget the Touareg’s substantial mass. Push it to the limit around a tight, twisty road and you will find the guardrails of the road lurking dangerously close to its fenders. However, it’s also the massive weight that keeps the Touareg unaffected by mid corner bumps, as they are absorbed as if not there. 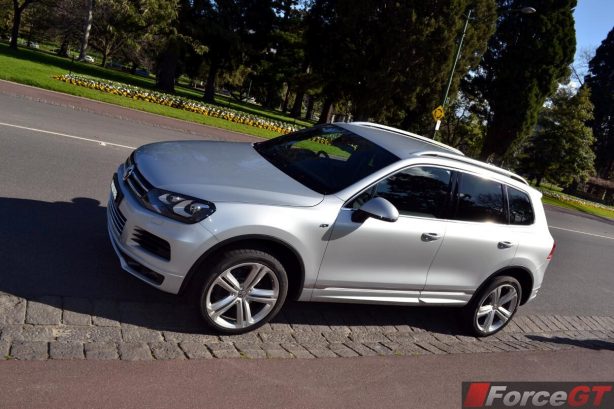 From inside the cabin, you won’t mistaken the V8 for something of fewer cylinders, but it just doesn’t sound very special, or give you that meaty V8 roar from the exhaust. It is, however, one of the most refined V8 diesels we have ever driven. And coupled with that silky smooth and quick eight-speed automatic transmission, the Touareg R-Line effectively blends sporty performance with excellent drivability. Despite rolling on 21-inch wheels with thin rubber, its ride comfort is no poorer than a standard Touareg and road noise is well suppressed across most tarmacs. It is still as capable off-road and its fuel consumption hasn’t suffered too much either, averaging a reasonable 11.5L/100km with about 60% of its time spent in urban traffic.

After a week behind the wheel, we start to see where the Touareg R-Line is coming from. It’s a SUV that chooses to be discrete rather than shouty in the way it delivers its performance. And it shows in its exterior styling too. It differs with the V6 TDI 4MOTION by just a lower front bumper, beefier side sills, a subtle rear diffuser and slightly larger wheels. If you prefer the opposite instead, the SUV for you is the Jeep Grand Cherokee SRT8. 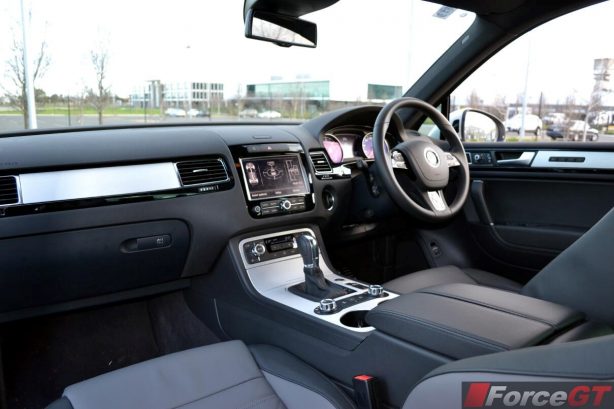 There are, however, a few issues. Being a $113k top-spec Touareg, the Dynaudio in-car sound system is unacceptably poor. The sun roof and some driving assistant features still come as options. And, just like the standard Touareg, there is no seven seat option.

The rest of the interior though, is typical Volkswagen – impeccably built with high grade materials throughout. The sport seats are comfortable but could use more lateral support.

In all respects, the Touareg R-Line is a credible performance SUV in its own rights. But, is it worth the extra $30k over the already capable Touareg V6 TDI 4MOTION for that extra bit of sportiness? Maybe not, unless you have too much spare change lying around.

How does this rhyme with the Q7 then you asked? Well, let’s just say the Touareg R-Line buys you the rights to join the ranks of German “V8 performance SUV” without the premium price tag of the Audi.