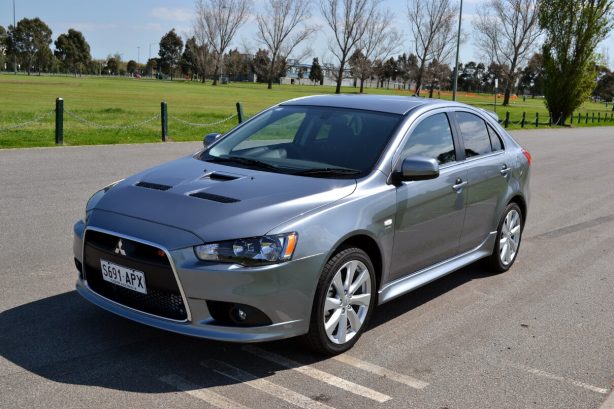 The performance gap between the standard Lancer and the legendary Lancer Evolution prompted Mitsubishi to release a “somewhere in between” model called the Lancer Ralliart in 2008. In a market segment long dominated by arch rival, Subaru with its popular Impreza WRX sports sedan and hatchback, Mitsubishi aimed high with the Lancer Ralliart.

Packed with 177kW of power, 343Nm of torque, all-wheel-drive and a six-speed twin-clutch transmission, the 2.0-litre four-cylinder turbocharged Lancer Ralliart seems to tick all the boxes for the stuff required for a high performance machine, at least on paper.

Available in both sedan or hatchback form (the latter called Sportback), the Lancer Ralliart’s pricing starts from $44,490 excluding on-road costs, slotting neatly between the top-end Lancer VRX and the iconic Evolution X. It is also sharply priced against the Subaru Impreza WRX and the Volkswagen Golf GTI. 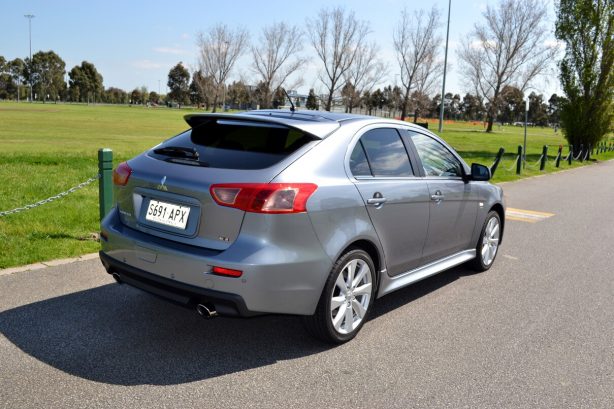 A brief walk around the Lancer Ralliart quickly reveals a weak point in its design – it looks too similar to the standard Lancer. Not that the Lancer is a bad looking car, but being a high performance variant and with an asking price of $45k, the Ralliart certainly deserves a lot more than just a different bonnet (borrowed from the Evolution X), a bigger rear spoiler and a couple of Ralliart badges here and there. Thus in the looks department, the Ralliart trails its more attractively styled rivals.

That said, the basic Lancer’s shape has stood the test of time quite well. Despite being five years old, the design still looks modern and distinctive. The 2012 model year Lancer Ralliart (as tested) also receives a mild facelift that includes chrome insert for the front grille, redesigned 18-inch alloy wheels (from 10 spoke to 8 spoke), updated interior trims and seat materials, as well as reversing camera and sensors as standard. 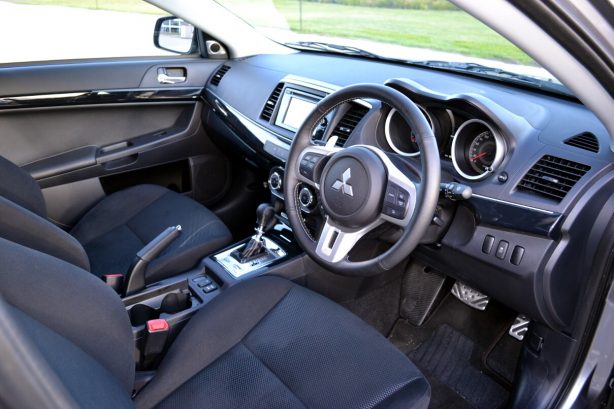 Unlike its exterior though, the Ralliart’s interior has not aged that well. The cabin looks outdated and is further let down by the abundance use of low-rent interior plastics. The exception being the leather wrapped steering wheel and the quality magnesium paddle shifter behind it.

If you hop into the Ralliart expecting to sink into a body-hugging sports seat, you will be disappointed to find that the Ralliart shares the same seats as the standard Lancer. However, the seats are comfortable and there is enough room for five adults. Useful storage spaces are plenty, especially around the centre console and underneath the armrest.

The Lancer Ralliart is powered by the same basic engine found in the Evolution X, albeit with a smaller single-scroll turbo, smaller intercooler and a different engine control unit, resulting in only 177kW/343Nm versus 217kW/366Nm in the Evo X. It also features the same Getrag developed twin-clutch Sport Shift Transmission (SST) used in the Evo X MR. Whilst the Evo X also gives you the option of a conventional six-speed manual gearbox, the Ralliart is only available with the SST.

The all-wheel-drive system in the Ralliart features an active differential system which uses an electronically controlled multi-plate clutch centre differential to vector torque split between the front and rear axle according to various information including current speed, engine rpm, steering and throttle input and driving conditions. Mitsubishi calls this the All-Wheel-Control (AWC) system and it is made up of three functions – Active Stability Control (ASC), Active Centre Differential (ACD) and Anti-Lock Brakes (ABS). The Evo X goes one step further by incorporating a fourth function called the Active Yaw Control (AYC), hence the name Super-AWC. 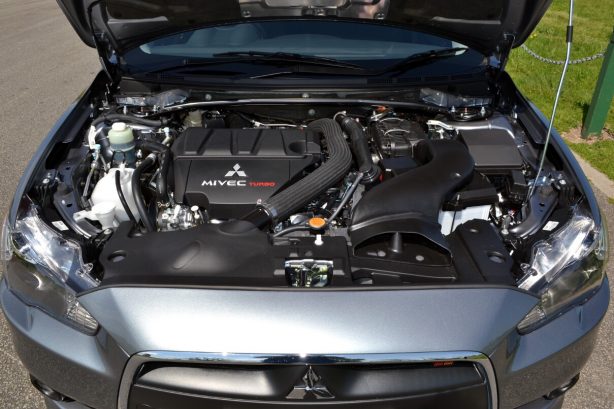 So what’s it like to drive? Well, it is no surprise that the Ralliart, with its sophisticated all-wheel-drive system, is a quick and fun car to drive. The steering provides good feedback and is responsive, precise and linear. Around the corners, the Ralliart offers good grip thanks to the AWC system. With 343Nm of torque coming in at just 2,500rpm, the Ralliart also pulls strongly across the midrange. 0-100 kph is achieved in 6.9 seconds (tested).

The twin clutch SST with its three driving mode – tarmac, gravel and snow, is what I like most about the whole package. It shifts in milliseconds and has a very sporty, mechanical feel to it. You can choose from two modes – Normal and Sport, with the latter offering sharper gear changes at a higher rpm. On downshifts the SST will also blip the throttle for you. The magnesium paddle shifters feel great and are a joy to use, although I wished they would rotate with the steering wheel. 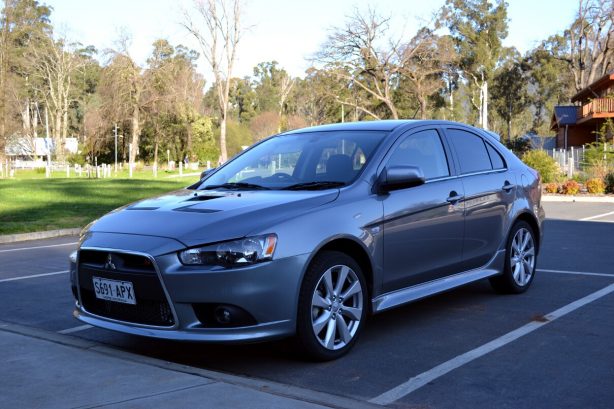 But, there is a problem. The Ralliart’s brakes, suspension components, wheels and tyres are all carried over from the Lancer VRX. Driving the Ralliart at the limit, you will soon find that its chassis just can’t cope with the extra power of the turbo 2.0 litre engine and the excellent AWC system. Whilst the suspension is comfortable for cruising around town, it is too soft for any kind of serious enthusiastic driving. This means the Ralliart has a tendency to understeer when pushed and on the limit, the handling is unpredictable. The brakes also feel spongy after prolonged hard driving.

However, being softer than Evo X, the Ralliart makes for an easier and more practical car to live with on a day to day basis.

Despite the budget interior, the Ralliart is a well built vehicle inside out with a solid cabin and good panel fitment. Mitsubishi’s impeccable reliability record and class-leading 5 years / 130,000km new car warranty should provide any potential buyers with further peace of mind.

That combined with the Ralliart’s preference for RON98 fuel means running the Ralliart requires a thick wallet. 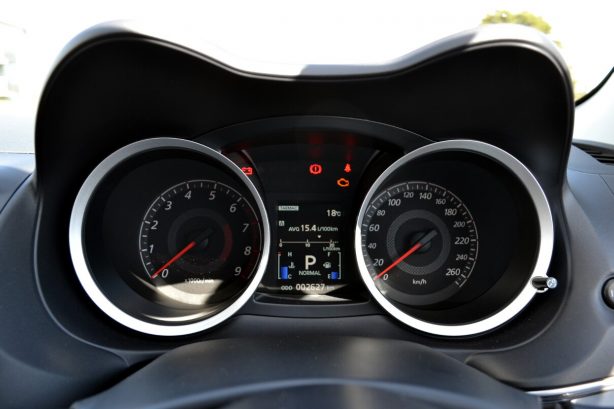 The Ralliart comes standard with cruise control, dusk sensing headlamps, rain sensing wipers and the convenience of keyless entry and start. A touch-screen infotainment system is also standard and comes with Bluetooth phone connectivity, with sound through a decent 6-speaker audio system. For about $700 extra buyers can also option up the Rockford Fosgate premium audio system with 9-speakers including a subwoofer in the boot, which I think is excellent value considering it does pack a lot of punch.

On the safety front, the Ralliart is equipped with 7 airbags, including driver’s knee airbag, electronic stability control with antilock braking system and brake assist. A reverse camera and sensor is also standard.

However, the Ralliart feels like a hasty mix and match effort from Mitsubishi just to fill up a void in its range. On the one hand, the Ralliart has some really nice bits from the Evo X, on the other hand it inherits the soft-sprung suspension and weak brakes from the Lancer VRX. The result is a car that is neither sporty enough to be a true performance car, nor economical enough to be a family hatch.