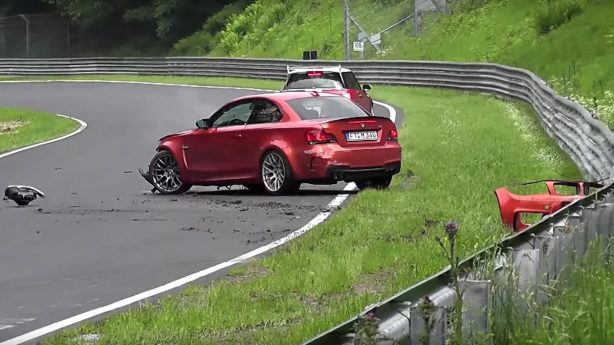 The Nürburgring is one of the most revered racetracks in the world. Car companies hone their cars on the track, while drivers hone their skills there.

However, the track is also one of the most challenging and many have found out the hard way, such as this BMW 1 Series M Coupe driver.

It isn’t clear what went wrong, but the sports coupe appeared to have lost traction and slid along sideways before smashing into the barrier. After loosing its front bumper and various bits, the 1M spun around and came to a rest precariously on the track.

Fortunately, the driver reportedly escaped without serious injury, except a bruised ego perhaps.

It was also a miracle that other drivers managed to avoid hitting his immobilised car.

The BMW 1M Coupe was seen as one of the most driver-focused vehicles to come out of BMW in recent times. It featured a 250kW/500Nm twin-turbo 3.0-litre straight six, uprated brakes and tyres, as well a wide body kit and was sold in limited numbers from 2011 to 2012.