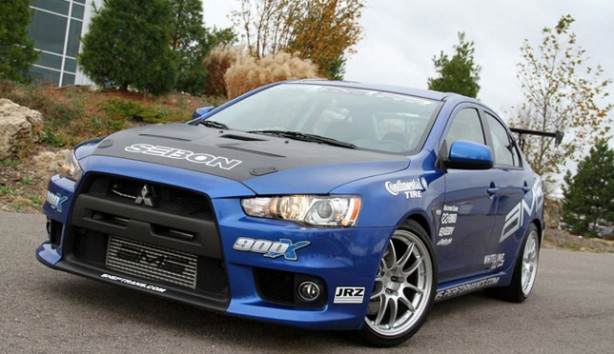 AMS Performance has released an upgrade kit for the Mitsubishi Lancer Evolution X. The kit is designed to turn the Evo X into a full blown track machine.

To withstand the increased in turbo boost and the higher engine power, the engine internals are strengthened with Spec JE pistons, Kelford cams, Manley I-Beam rods, stronger valve springs and new head studs. Also in the package is a new clutch, a stronger shifter base bushings and a full polyurethane engine mount kit.

Various aerodynamic bits are also added to ensure the car stays glued to the tarmac. Handling is further enhanced through a new suspension setup and bigger brakes.

“The AMS 900X Package for the Mitsubishi Evolution X is the ultimate turn-key solution for those seeking unmatched power and performance. This exclusive package is capable of tripling the power output of your stock Mitsubishi Lancer Evolution X – turning it into a 900HP street-driven super car and placing the AMS 900X Package in a league of its own! This is the same package that powers the World’s Highest Horsepower EVO X!”, states AMS at the press release.