The hotted up 86 will be sold in limited numbers and available only in Japan at the moment. Inspired by the 86 Griffon concept unveiled in Tokyo last year, the limited edition 86 14R60 distinguishes from the standard car through a racy bodykit consisting of new front and rear bumpers, side skirts, rear diffuser, rear wing and wider wheel arches. A carbon roof, front canards and forged magnesium 18-inch wheels further add to the aggressive looks.

Inside, the TRD treatment includes lightweight bucket seats, carbon fibre trim and an Alcantara steering wheel. There are orange stitching, TRD mats and kick plates as a reminder that this isn’t a regular 86. To save weight, the rear seats have been deleted, so is the radio.

Tightening up the already much-touted handling is an adjustable suspension with firmer bushes and a limited-slip differential. The chassis has also been strengthen with the addition of a front strut-brace and boot-mounted V-brace, while uprated brakes provide extra stopping power. 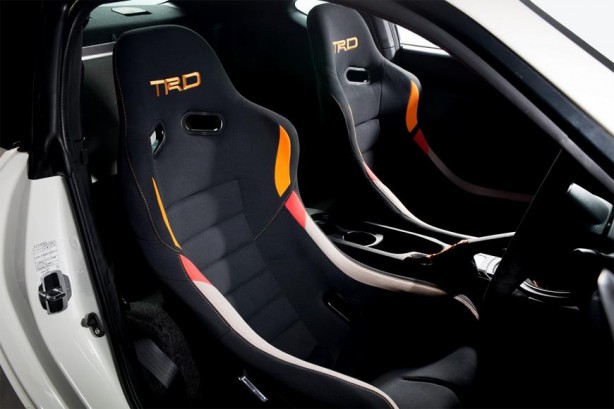 Under the bonnet the Subaru-sourced atmospheric 2.0-litre boxer engine breaths easier through a new higher flowing air-intake with high-flow filter, while an auxiliary oil cooler helps keep temperature in check. Despite the mods however, the flat-four’s power output remains the same at 147 kW and 205Nm.

Sending power to the rear wheels is a shorter ratio six-speed manual gearbox with high-performance clutch and lightweight flywheel for better top-end response.