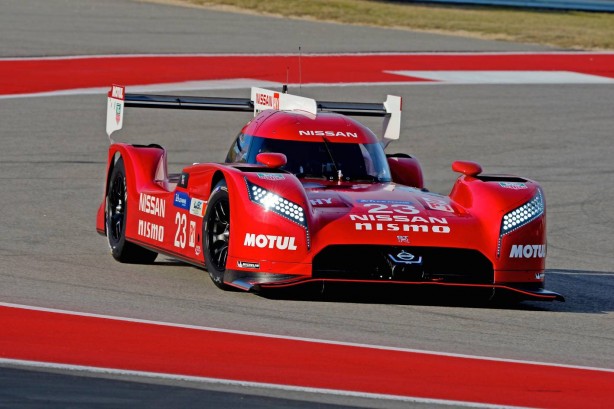 Nissan has unveiled its Le Mans challenger, the Nissan GT-R LM NISMO, the car that will take on the best in the world in the race to glory at the Le Mans 24 Hours.

In a bold move, the Japanese manufacturer has interpreted the sport’s technical regulations in an innovative way, producing a front-engined, front wheel drive car that is powered by a V6 3.0-litre twin turbo petrol engine and a kinetic energy recovery system.

“The GT-R is our flagship road car,” said Roel de Vries, Global Head of Marketing and Brand Strategy at Nissan. “This, the ultimate GT-R, continues a sporting bloodline that goes back three decades with NISMO, the motorsport and performance arm of Nissan. Le Mans drives innovation so success on the track will lead to greater innovation in our road car range. We are the new kids at Le Mans; our opponents are the best in the world but we are ready.”

The new car will contest the LM P1 class of the FIA World Endurance Championship, the highest category for non-open-wheel car racing. Starting at Silverstone, UK on 12 April the series travels around the world to Spa in Belgium, onto the Le Mans 24 Hours and Germany’s Nurburgring, before going global with races in the US, Japan, China and the Middle East.

The FIA World Endurance Championship is the ultimate proving ground for automotive companies as technological gains on the track can carry through to road cars. Nissan says racing car engineers are facing the same challenges as road car engineers as the spotlight falls on energy efficiency. With more technical freedom than Formula 1, the LM P1 engineers have ample opportunity to innovate.

A truly global effort, the GT-R has been created by a team of carefully selected experts in Japan, the US and Europe. Unlike other LM P1 cars, the GT-R’s V6 3-litre twin turbo petrol engine sits in the front of the front-wheeldrive car, while the hybrid power is harvested from the front driveline to augment acceleration. 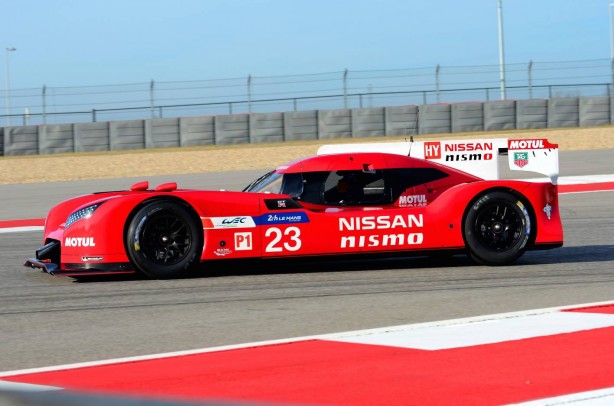 When asked about the wider front tyres compared to the rear, Bowlby said “The front tyres on the Nissan GT-R LM NISMO are bigger than the rear tyres – 14 inch wide front vs. 9 inch rear. This is due to the way that mass is distributed in the car. We have moved the weight bias forwards to give us traction for the front-engined, front-wheel drive. We’ve also moved the aero forwards so we’ve moved the capacity of the tyres forward to match the weight distribution. So the aero centre of pressure, the mass centre of gravity and the tyre capacity are all in harmony and that means we have bigger tyres at the front than the rear.”

In 2015 Nissan will enter the Nissan GT-R LM NISMO into the full FIA World Endurance Championship, marking a return to the premier class at the Le Mans 24 Hours for the Japanese manufacturer.