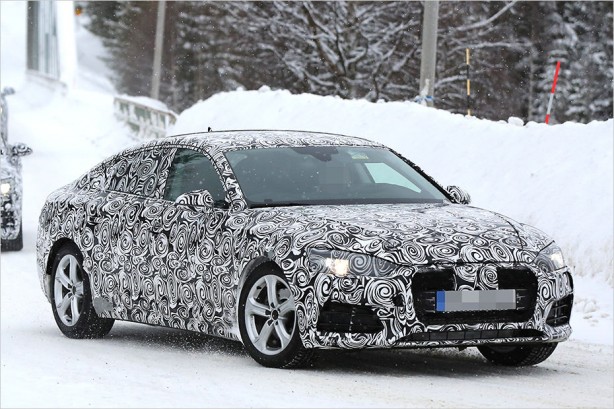 The long overdue Audi A5 replacement is finally inching closer to production, and here’s proof. Spotted undergoing cold weather testing near the Arctic Circle is a Sportback version of the new A5.

Despite the heavy camouflage, the prototype can be seen adopting Audi’s latest single shield grille that first made its debut on the Audi Crosslane Coupe concept. Elsewhere, the slightly higher rear roofline suggests more space for the interior. Expect the headlights and taillights to be largely similar to those found on the new Audi A4.

Like the current model, the next generation A5’s engine line-up will mimic that of the new A4. This includes a range of petrol and diesel engines, with quattro all-wheel-drive offered in certain models. Audi’s virtual cockpit digital instrumentation will also be standard equipment across the range.

The launch of the new Audi A5 is scheduled for early 2017.