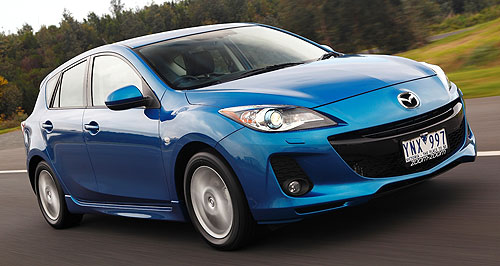 Arguably one of the most exciting and adventurous brands to come out of the land of the rising sun, Mazda has just launched its refreshed range of Mazda3. We all know by now the new range is equipped with the company’s latest fuel-saving SkyActiv drivetrain technology.

What is a surprise though are the range-wide price cuts. Mazda has slashed $1000 from the entry model, Neo manual. It is now $20,330 – undercutting base models from its rivals such as the Toyota Corolla, Mitsubishi Lancer, Holden Cruze (Chevrolet Cruze in overseas markets), Ford Focus and the new Hyundai Elantra.

On top of the price cut, Mazda Australia has thrown in more goodies as well, such as 15-inch alloy wheels which now come standard on the Neo. This translates to a $1,790 price reduction!

Together with the revised powertrain, the Mazda3 midlife update also includes a number of styling and mechanical enhancements that promise to improve on the car’s already accomplished handling and occupant comfort.

The star of the new range is of course the mid-range Mazda3 SP20 SkyActiv. It boasts a class-leading petrol fuel economy of 6.1 litres/100km, while generating a respectable 113kW of power and 194Nm of torque from its 2.0-litre 4-cylinder engine. CO2 emission is rated at 143g/km. 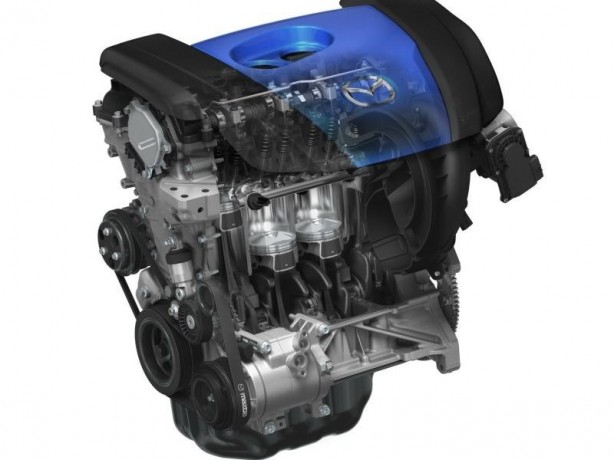 The normally aspirated SkyActiv-G engine, to give it its full name, is mated to a new 6-speed automatic SkyActiv transmission (no manual is offered with this engine) that Mazda claims offers the best characteristics of conventional, CVT and dual-clutch transmissions. It also slices fuel consumption by 25.6 per cent over the previous model with a five-speed automatic.

Mazda says it has been able to raise the engine’s compression ratio to a diesel-like 12-to-1, thanks to a range of new technologies, including multi-jet direct fuel injectors and a piston featuring a small cavity in the top to suppress knocking.

The multi-jet injectors provide finer atomisation of petrol, while the small cup-like cavity promotes a uniform spread of flame immediately after ignition. Engineers from the Hiroshima based company redesigned the pistons, conrods and gudgeon pins to shave 127g from the weight of components in each cylinder, plus 690g from the redesigned crankshaft.

To reduce drag on the engine and further improve on efficiencies, light-load valve springs, a new plastic water pump impeller, low-resistance water and oil paths through the engine, smaller oil pump and a low-tension serpentine belt drive were employed. 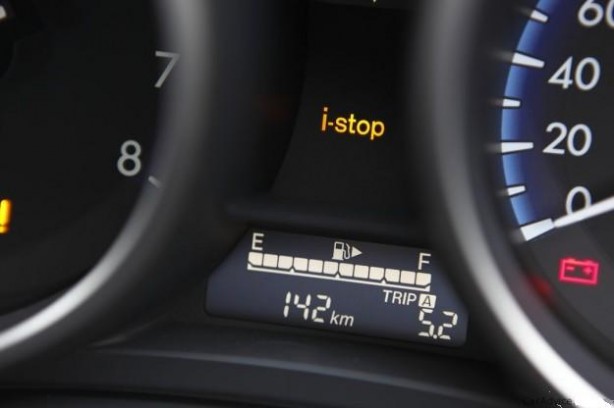 On top of that, Mazda has also introduced idle-stop to further reduce fuel consumption. This is the first application of such technology by Mazda in Australia.

This is however just a glimpse of what Mazda has installed for its future powertrain technology, as the SkyActiv will be extended across the company’s range of vehicles, encompassing diesel engines and even vehicle architecture, starting with the forthcoming Mazda CX-5 compact SUV.

For now though, only the mid-range Mazda3 are equipped with the new technology while others carry on with their existing MZR powertrains. 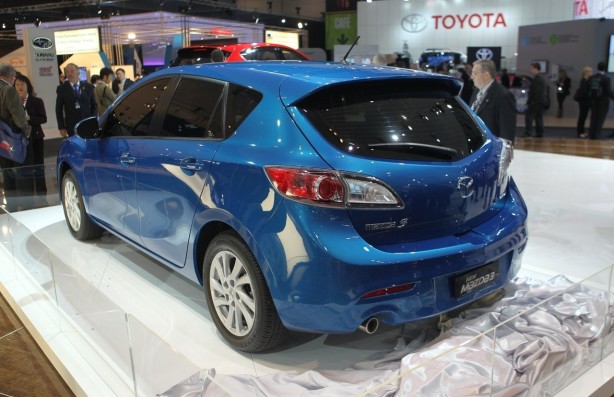 Unlike the SkyActiv-G headline act, the new Mazda3 gets only minor styling makeover, along with a range of suspension and body tweaks to improve ride and reduce NVH, which is the main bug bear of its predecessor.

The front bumper has been redesigned to improve aerodynamic flow, while the rear bumper is now 30mm shorter. There are new 15- and 16-inch alloy wheel designs, along with new seat trim and silver highlights in the cabin. The thickness of sheet steel in a frame under the floor was increased to dampen road noise

To reduce drag at highway speeds, there are bigger under body streamlining panels. Mazda claims the sedan’s Cd=0.26 and hatch’s Cd=0.28.

Note: This article is based on Australian specific Mazda3 models.