Mazda to debut new subcompact – the Hazumi concept – at Geneva 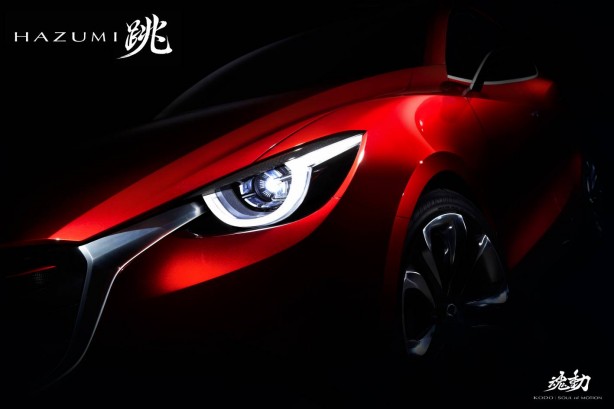 Mazda is set to premiere the company’s next-generation subcompact model – the Hazumi concept, at the Geneva Motor Show which opens on March 6 and runs through March 16, 2014. A teaser image released by Mazda today shows the concept adopting an evolution of the company’s “KODO” design language.

The name Hazumi gets its origin from a Japanese word which means “to bound or spring up”. Mazda has chosen the name to convey the image of an untamed animal leaping, perfect fitting for a small car designed to look as if it is literally “bursting with energy”.

Mazda has remained tight-lipped on any further information but indicated that the new subcompact car will not compromise on any of Mazda’s vehicle engineering principles. It expresses the ideal form of the company’s next-generation of subcompact models.

Along with the Hazumi concept, Mazda will also use the Geneva show to debut the new SKYACTIV-D 1.5, a newly developed small displacement clean diesel engine, and display a commemorative exhibit celebrating 25 years since the launch of the Mazda MX-5.