Korea’s second largest car maker, Kia, has just launched its luxury flagship sedan in Korea, called the ‘K9’. It is Kia’s first foray into the premium segment as well as the rear-wheel-drive arena.

Designed by former Audi designer, Peter Schreyer, who is now Kia’s Chief Design Officer, the classy sedan promises to deliver engaging driving dynamics and advanced high-tech features that will compete head on with its European and Asian counterparts, with an emphasis on value.

“K9 is all about elegant simplicity, balanced proportions and simple surfaces,” says Schreyer when describing the car’s design. Kia’s first luxury sedan sports prestigious proportions with its class-leading long wheelbase and elegant stance. The A-pillars are pushed back to create a longer bonnet and impressively short front overhang. As a result, the distance between the centre of the front wheels and the A-pillars, the so called “prestige distance”, is increased.

Together with a high shoulder line, small glass house and lashing of chrome inlays around the distinctive window graphics, the K9 looks decidedly premium. It sits on a 3,045mm (119.9 inches) wheelbase (shared with the Hyundai Equus), with a 5,090mm (200.4 inches) overall length, 1,900mm (74.8 inches) overall width and 1,490mm (58.7 inches) overall height. The car also has one of the best dynamics co efficiencies in its class, with a Cd of 0.27.

When the K9 hits overseas markets in the fourth quarter of 2012, it will be powered by an upgraded 213kW (285hp) Lambda 3.8-litre V6 engine, with a 245kW (328hp) 3.8 GDI engine joining the line-up in 2013. Both are normally aspirated engines equipped with dual continuously variable valve timing (CVVT) and a variable intake system (VIS).

They will be mated to Kia’s all-new 8-speed automatic transmission with shift-by-wire (SBW) technology operated via a BMW inspired ‘joystick’ gear lever. 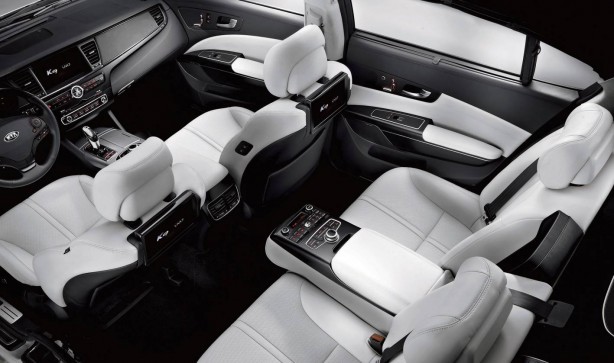 The K9’s ultra-stiff bodyshell is built with 74.3 percent high-strength steel. Together with electronically controlled air suspension with five-link front and rear suspension geometry, the K9 is expected to deliver superior first class ride and handling.

There are four driving modes – Eco, Normal, Sport and Snow, that the driver can choose from which alters the suspension, steering, engine and transmission characteristics to suit different road conditions and driving styles. 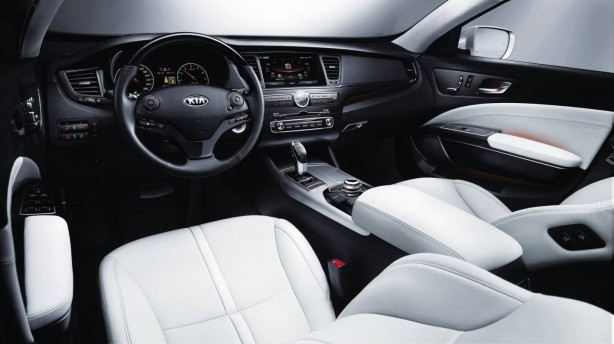 A special ‘VIP’ option will offer twin heated and ventilated rear seats with a reclining backrest, sliding cushion and lower leg support for the ‘nearside’ seat, together with a front passenger seat that slides forwards when unoccupied.