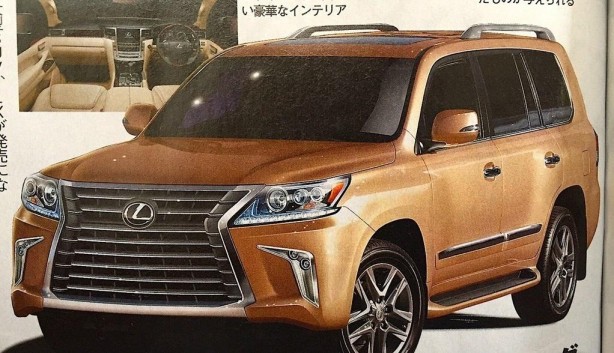 The facelifted 2016 Lexus LX 570 has leaked onto the web ahead of its official debut, slated for August.

Based on the mighty Toyota Land Cruiser, the third-generation LX was released back in 2012 and appears to have gone under the knife for a minor facelift for 2016.

While the leaked image doesn’t show the car’s posterior, it is safe to assume a new bumper and different graphics for the taillights are in store.

Inside, we can expect a new infotainment system with Lexus Touch, as well as new trims.

It isn’t clear whether Lexus intends to make any changes to the LX 570’s 5.7-litre V8 petrol engine at this stage, but history dictates a hike in power in conjunction with an increase in efficiency is likely. The unit currently churns out 286kW (383 bhp) and 546Nm of torque channeled to all four wheels via a 6-speed automatic transmission with a Torsen limited slip differential.

New technologies such as autonomous emergency braking that automatically brake the car if it detects an imminent collision can also be expected.