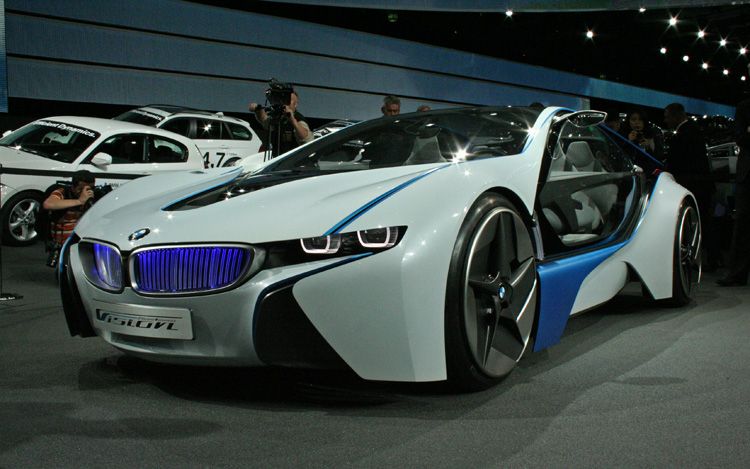 Great news for fans of the Vision Efficiency Dynamics (VED) concept that BMW showed case at the 2009 Frankfurt Motor Show. The Bavarian crew has confirmed the sleek looking coupe will transition from the catwalk to the showroom.

Don’t expect much change from $200,000 when the hybrid 2+2 hit showrooms sometime in 2013. It will be powered by a three-cylinder turbo diesel engine “with a hybrid synchronous motor at the front axle and a full-hybrid engine at the rear axle”, putting out a total of 241kW and hits 0-100 km/h in just 4.8 seconds.

Unlike other supercars of this calibre, the VED’s 3 cylinder turbo diesel engine slurps only meagre 3.76 litters of fuel per 100 kilometers and emit 99 grams of CO2 per kilometer.

The production VED will also be a plug-in, with the ability to go 50 km (31 miles) on lithium-polymer battery power. See BMW’s press release below, as well as a video of the Vision Efficient Dynamics prototype.

Munich/Leipzig. It was the star of the Frankfurt international motor show IAA in 2009: a four-seater sports car with charismatic design, fascinating performance figures and unsurpassed efficiency, powered by BMW ActiveHybrid technology and presented under the title BMW Vision EfficientDynamics. With its wide range of completely or virtually production-ready components, this concept study met with an overwhelming response. There was a widespread desire to put the car on the road, and the realisation of this desire is moving considerably closer. At the Leipzig trade fair centre BMW is presenting a fully road-ready technology showcase vehicle based on the BMW Vision EfficientDynamics concept study. This presentation will give media representatives their first ever opportunity to find out what it is like to drive the 2+2-seater car powered by an innovative hybrid system. 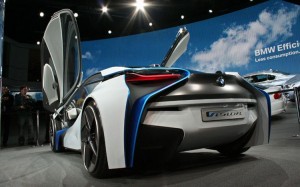 The concept study BMW Vision EfficientDynamics represents the future of driving pleasure. Since its world premiere at the IAA 2009 it has received several awards both for its futuristic design and its ground-breaking engine technology. Just 1.24 metres high, the 2+2-seater takes up the characteristic BMW shaping style, geared consistently towards aesthetic appeal and dynamic performance. Wing doors facilitate entry to both rows of seats, while extensive aerodynamic measures reduce the drag coefficient to 0.22. The combination of a 3-cylinder turbo diesel with a hybrid synchronous motor at the front axle and a full-hybrid engine at the rear axle enables an overall system output of 241 kW/328 bhp. The innovative design of the BMW ActiveHybrid technology allows performance figures at the level of a sports car, with just 4.8 seconds required for the sprint from zero to 100 km/h – with an average fuel consumption in the EU test cycle (KV01) of 3.76 litters/100 kilometers, equal to 75.1 mpg imp, and a CO2 emission rating of 99 grams per kilometer (1,3 l/100km and 33g CO2/km; EU-PHEV ECE-R101). 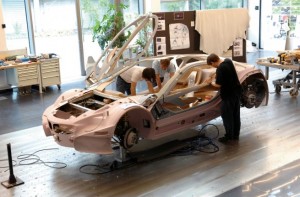 This unique relation between dynamic performance and efficiency derives from the high level of efficiency of all engine components as well as intelligent linking of the power output of the three engines, as well as precisely controlled energy management including brake energy regeneration. What is more, the study BMW Vision EfficientDynamics is conceived as a so-called plug-in hybrid. The lithium-polymer rechargeable battery housed centrally in a longitudinal chassis element and designed specially for this hybrid sports car can be fully charged at a conventional power socket within just two and half hours. The use of electrical energy alone permits zero-emissions motoring with a range of some 50 kilometres, while a 24-litre diesel tank extends the total action radius of the vehicle to up to 700 kilometres. 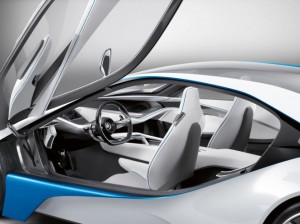 By developing a sports car based on the BMW Vision EfficientDynamics concept study for serial production, the Munich-based premium automobile manufacturer underscores its position as a global leader in the production of sporty vehicles with exemplary efficiency. All current models are fitted as standard with extensive measures for the reduction of fuel consumption and CO2 emissions. The innovations used for this purpose are based on the development strategy BMW EfficientDynamics, which also includes BMW ActiveHybrid technology as well as purely electrical drive systems. With the BMW ActiveHybrid 7 and the BMW ActiveHybrid X6, two serial production vehicles have already been launched in which a BMW-specific combination of combustion and electric drive results in an especially efficient increase in the driving dynamics so characteristic of the brand.

The BMW Group is also undertaking extensive field tests in regular traffic, which after the MINI E will soon include the BMW ActiveE, so as to prepare for serial production of a purely electrically powered model which is to be produced at the BMW plant in Leipzig from 2013 as the Megacity Vehicle.

At the same time, the current technology showcase vehicle being presented to mark the expansion of the BMW Leipzig plant not only demonstrates the consistent further development of BMW ActiveHybrid as a drive concept. It also highlights the expertise of the BMW Group in the integrated development of vehicle concepts which are geared towards the principles of BMW EfficientDynamics in every detail. Like the Megacity Vehicle, the sports car based on the BMW Vision EfficientDynamics study is an example of how future-oriented mobility opens up fascinating perspectives in combination with the driving pleasure characteristic of BMW.