BMW i8 becomes the newest member of the NSW Police squad 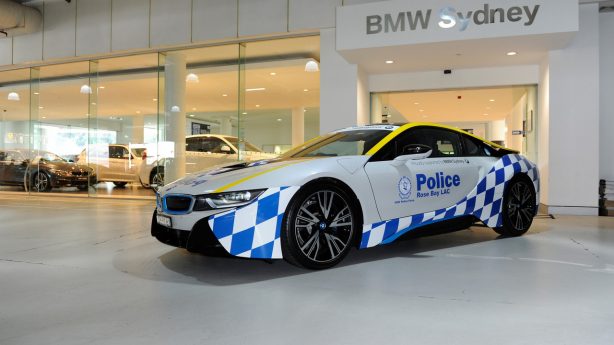 The police squad of the affluent Sydney harbourside suburb of Rose Bay have welcome its newest – and most exotic – member: a new BMW i8 hybrid supercar.

Simon Macedone, Dealer Principal of BMW Sydney, was delighted to present the stunning BMW i8 to Superintendent Hodder and extend the dealership’s support to the Rose Bay Police.

“BMW Sydney has a long history in the Eastern Suburbs, which has been our home for the past 22 years and we’re extending that citizenship with the redevelopment of the BMW Sydney site.

“Our partnership with Rose Bay Police is the perfect way to demonstrate our commitment to the community, while raising awareness and engagement for the station.

“And to top it off we’re delighted to cement our place in the community with the handover of this incredible machine to the Rose Bay Police,” said Macedone.

“The BMW i8 fits the bill perfectly with its high performance, athletic aesthetics and sensational efficiency,” he said. 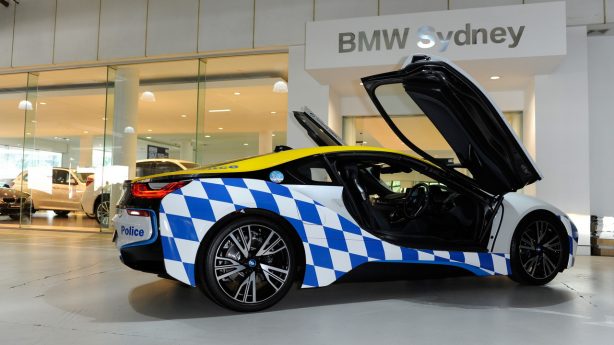 “This BMW is the latest in a number of different vehicles that we have utilised at Rose Bay Local Area Command to raise awareness and engage with the community.

“It is a great community engagement tool that will be used at a number of police events to showcase the role police play in the community.

“Rose Bay LAC is very appreciative of the support provided by BMW Sydney and the Rose Bay Chamber of Commerce. This initiative is highly regarded and this vehicle, on loan to the Police Force at no expense to the tax payer, is another example of this support for community engagement,” Superintendent Hodder said.

The i8, which is comprehensively covered by BMW Sydney, will assume its new role within the squad effective immediately, making regular appearances at community events to boost the department’s profile. 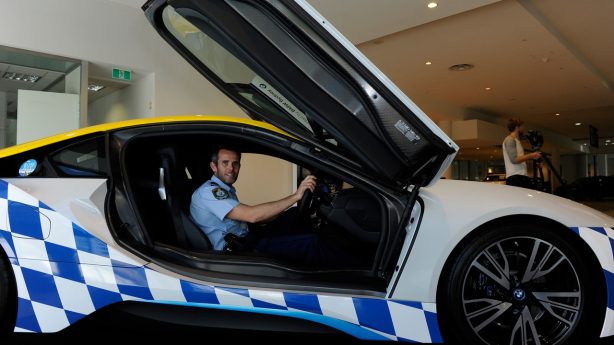 Under the snout of the futuristic 2+2 sports car is a 1.5-litre three-cylinder turbocharged petrol engine that produces 170kW of power and 250Nm of torque. It drives the rear wheels via a six-speed automatic transmission.

The resulting combined outputs of both power units is a maximum of 266kW of power and peak torque of 570Nm, enabling the i8 to rush from 0-100km/h in just 4.4 seconds before hitting a limited top speed of 250km/h.

Like other plug-in hybrids, the i8 can travel up to 37km in pure electric mode, while the combined fuel consumption is rated at 2.1L/100km. It produces just 49g/km of CO2.