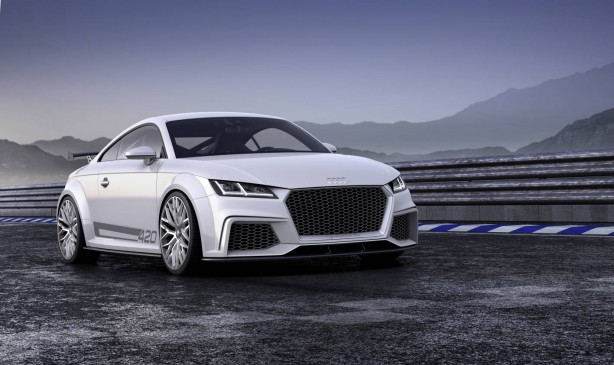 The Audi TT quattro sport concept has been unwrapped at the Geneva Motor Show. Based on the new Audi TT that was unveiled just a day earlier, the concept makes a statement with 2.0-litre TFSI engine packing a monstrous 309 kW at 6,700 rpm – a new benchmark in the 2.0-litre category. The power is put on the road via Audi’s quattro all-wheel drive.

“With our Audi TT quattro sport concept show car, we wanted to demonstrate what the new TT’s technology can do if you take it a step further,” explains Prof. Dr. Ulrich Hackenberg, Board Member for Technical Development. “This car is designed for racing – an extreme driving machine for the motorsports enthusiasts among our customers.”

The new engine in the TT quattro sport concept has a specific output of 155 kW per litre of displacement – that’s more than even 2001’s victorious Le Mans R18 racing car, which was the first time Audi combined turbocharging with FSI direct gasoline injection. The forced-inducted four-cylinder engine has 450 Nm of torque available in the engine speed range from 2,400 to 6,300 rpm. With over 300 Nm already available at only 1,900 revs. 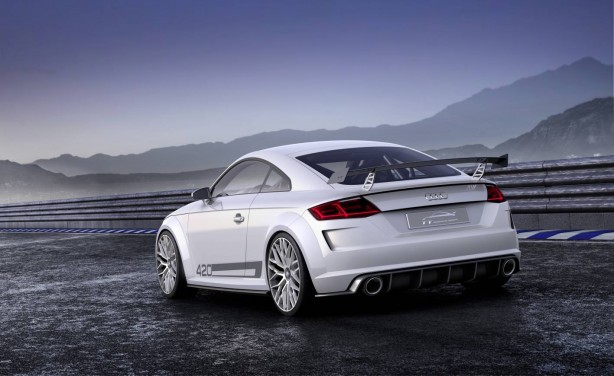 Tipping the scale at just 1,344 kg (without driver), the Audi TT quattro sport concept boasts impressive power to weight ratio. Each kW supplied by the 2.0-litre TFSI, which itself weighs under 150 kilograms, needs to shift less than 4.3 kilograms. The four-cylinder engine catapults the show car from 0 to 100 km/h in a supercar taming 3.7 seconds.

“This high-performance power unit is an impressive demonstration of the power reserves available in our EA888 engine range. This power unit has received numerous awards all over the world and it already lives up to its claim in many Audi sporty models. In the TT quattro sport concept, it demonstrates its full power potential,” said Dr. Stefan Knirsch, Head of Powertrain Development

“The thirty-five years of experience we’ve gained in the field of turbocharging are manifested in this engine’s unique combination of maximum performance, dynamism, and fuel efficiency,” Dr. Stefan Knirsch continued.

The cylinder head is a systematic further development tailored to the higher loads and increased gas throughput. To accommodate the higher output, the EA888’s familiar, highly compact thin-wall cylinder crankcase is here made of a high-strength cast alloy. The also newly developed exhaust-gas turbocharger features optimised mixed-flow technology and produces up to 1.8 bar of charge pressure. 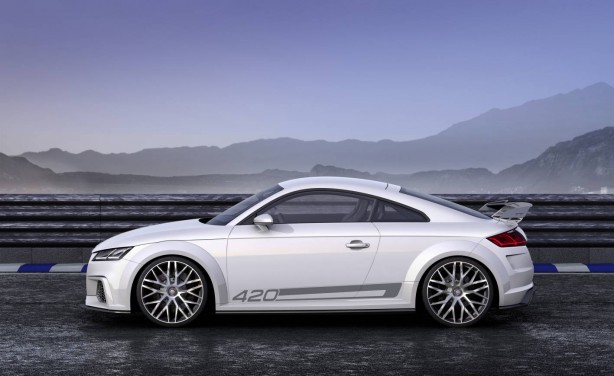 The 2.0 TFSI transfers its torque to a compact, three-shaft S tronic. The dual-clutch transmission shifts gears in split-seconds, adding its share to the show car’s impressive acceleration.

The permanent quattro all-wheel drive delivers the power to the road. For optimum weight distribution, the hydraulically actuated, electronically controlled multi-disk clutch is located on the rear axle. The quattro drive actively controls distribution of the drive torque between the axles in milliseconds, thus adding to the car’s dynamic handling.

Pinning the coupe to the tarmac is a McPherson suspension with aluminium components at the front and a four-link layout at the rear. The stiff setup brings the body closer to the road when compared with the standard production TT. 54 percent of the weight rests on the front axle, while 46 percent is on the rear. ESC electronic stabilisation control, which can be partially or fully deactivated, complements the suspension’s sporty character.

When cornering, wheel-selective torque control kicks in. If necessary, drive torque is transferred from the wheels on the inside of the bend to those on the outside. Thanks to the distribution of torque, the car turns very slightly into the corner, allowing precise and neutral cornering. 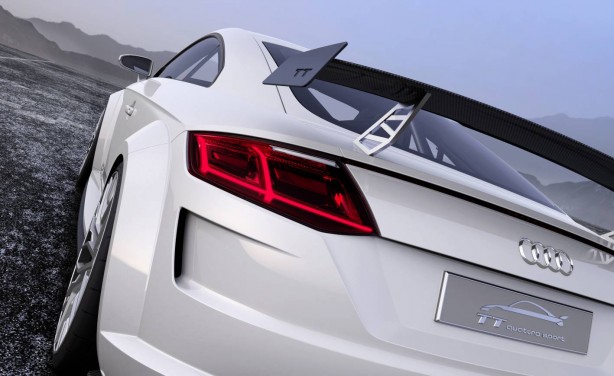 A significant part in the Audi TT quattro sport concept’s lightweight design is played by the body, which is based on the MQB modular transverse matrix. Its hybrid concept represents the latest evolution of the Audi Space Frame (ASF) and further lowers the car’s centre of gravity compared with the second-generation TT.

The front end is made of steel. The passenger compartment floor comprises high-strength, hot-shaped steel components which, thanks to their extremely high strength, feature very low wall thicknesses and thus weigh accordingly little. The compartment’s structure, the entire exterior skin, and the doors and lids are made of the classic Audi semi-finished aluminium products cast node, extruded profile, and sheet metal.

The show car is finished in Crystal White paint job and rests on 20-inch wheels with a central locking mechanism and semi-slick tires.

A splitter made of carbon-fibre reinforced polymer (CFRP) stretches toward the front to round off the front end at the bottom and increase the downforce on the front axle.

The TT’s iconic wheel arches have been extended 30 millimetres further on every side, giving the car a more aggressive stance on the road. They are connected by powerfully accentuated sill trims. Their lower segments are made of CFRP. Together with the splitter and the rear diffuser, which stretch all the way to the wheel arches, they form an aerodynamically effective contour.

On the rear, the wide CFRP diffuser that extends beyond the vehicle silhouette underlines the show car’s racing character. Delineated by vertical edges, the diffuser surrounds two large, fully circular tailpipes that are located further outward than on the series-production car; large air outlets are positioned on the sides beneath the taillights. A large, fixed wing increases the downforce on the rear of the Audi TT quattro sport concept. 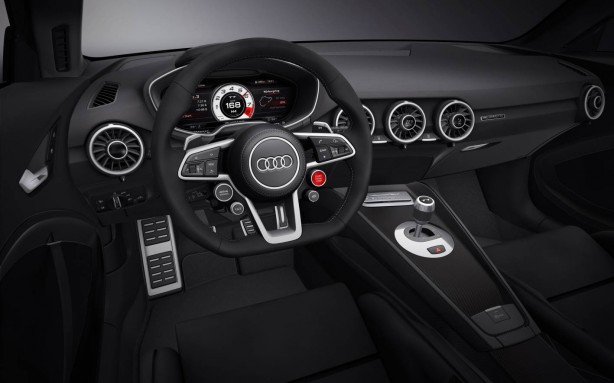 The show car interior has been reduced to the essentials, doing away with numerous components that are dispensable on the race circuit.

The door panels have been stripped of armrests and speakers – the interior is characterised by Alcantara. A dominant diagonal strip of Alcantara acts as a door pull handle, the door openers feature a filigree design. Low-set racing buckets serve as seats, featuring black four-point seat belts with white accentuating stripes. The luggage compartment offers space for two racing helmets.

The same as in the standard TT, the controls are driver oriented. The Audi TT quattro sport concept features a compact steering wheel with a pronounced rim that flattens out at the bottom. The steering wheel’s spokes house the red start/stop button alongside the keys and rotary buttons for operating the Audi virtual cockpit. Depending on what the driver sets, the fully digital instrument cluster’s 12.3-inch display shows different views.