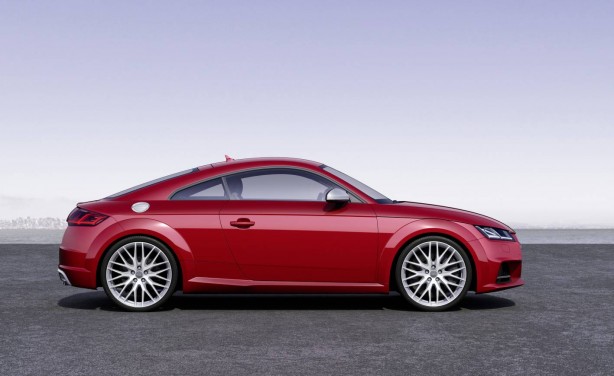 Audi has taken the wraps off the third-generation Audi TT, along with its go fast TTS variant. Sporting an evolutionary design that will be familiar to current TT owners, the 2014 Audi TT gets a dominant, broader and flatter hexagonal grille flanked by a pair of optional trapezoidal LED headlights.

Like the Audi R8 supercar, the brand’s four-ring logo has moved away from the grille and now sits on the lower section of the bonnet, while the prominent wheel arches give a car a muscular stance. Like the original TT, the front wheel arch breaches the line of the bonnet, which continues over the door as a ‘Tornado’ line and runs almost horizontally through to the tail as a strong body shoulder. 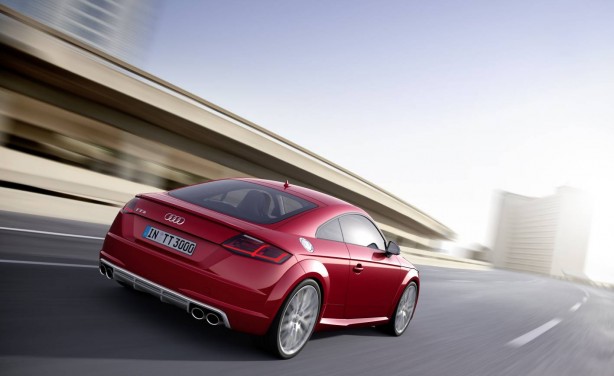 The fuel flap on the right side of the car is the classic circle and surrounded by socket screws and opens with a light tap on the TT logo. There is no tank lid beneath the flap.

At 4.18 meters, the Coupé is almost exactly the same length as its predecessor, though its wheelbase has grown by 37mm to 2,505mm, making for especially short overhangs. It is 1,832mm wide, and has the same height as the previous model at 1,353mm. 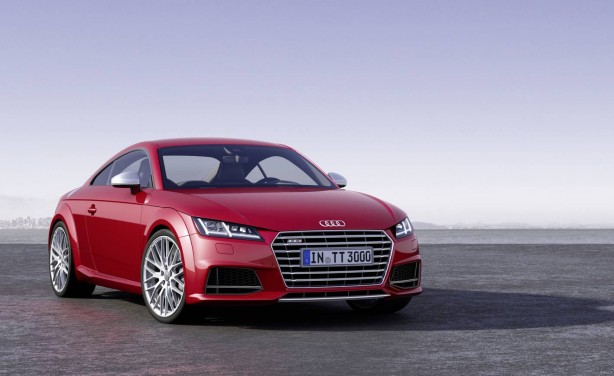 At a speed of 120km/h, a spoiler extends from the boot lid to reduce drag and improve down force. All models are equipped with two large round exhaust pipes, while the TTS gets quad pipes arrangement.

Customers can also specify an optional S line package that pumps up the exterior styling with larger air intakes and sharper body kit. It also lowers the car by 10mm.

The third-generation TT rides on Volkswagen Group’s MQB platform which also underpins the Golf and Audi A3. It is up to 50kg (110 lbs) lighter than its predecessor, with a kerb weight of 1,230kg (2,711 lbs) for the 2.0 TFSI model.

The side sills and roof frame are made of extruded aluminium profiles that are integrated into the structure using cast aluminium nodes. The bonnet, doors and boot lid are also made of aluminium.

Inside, the cabin is almost concept car-like futuristic, with an all-new 12.3-inch TFT screen powered by an Nvidia Tegra 30 graphic processor. According to Audi, the rule is “less is more”. The instrument cluster and the MMI screen have been combined to form a central, digital unit – the so-called Audi virtual cockpit. In addition, the controls for the air con system are positioned directly in the air vents.

The standard sports seats have integrated head restraints and are positioned lower than in the predecessor model. They are also more than 5kg lighter. In the TTS, the S sport seats come with pneumatically adjustable side sections for better support.

The new multi-function flat-bottom steering wheel has aluminium-look clasps that encompass the spokes. It also has a driver airbag that takes up 40 per cent less space without compromising safety and hence emphasises the sense of visual lightness.

The 2+2 seater has a boot capacity of 305 litres, 13 litres more than the outgoing model. 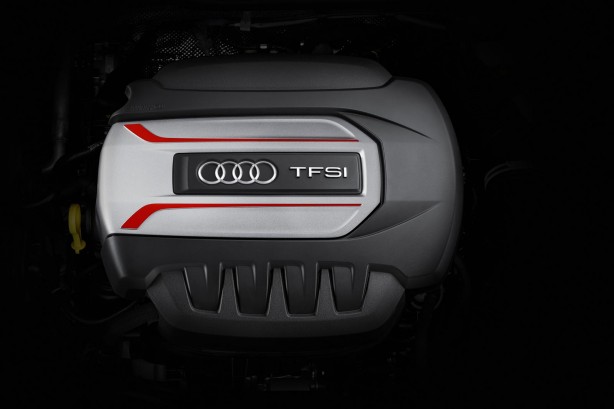 There are three engine variants in the new TT and TTS with turbocharging and direct injection.

For the launch of the TT, the 2.0 TDI will be available with manual shift and front-wheel drive. It delivers 135 kW and torque of 380 Nm. The new sports car can thus accelerate from 0 to 100 km/h in 7.2 seconds and reaches a top speed of 235 km/h. Standard fuel consumption is a mere 4.2 litres per 100 km, which translates into CO2 emissions of 110 g/km, a new record low level in the sports car world.

The 2.0 TDI features two balancer shafts in the crankcase, adjustable camshafts and a common rail injection system delivering maximum pressure of 2,000 bar. The Audi TT 2.0 TDI meets the Euro 6 standard and, thanks to its high efficiency, bears the “ultra” label.

The 2.0 TFSI is available in two versions – a 169 kW version for the TT and a 228 kW version for the TTS. In both versions it unites various ultramodern technologies – the additional indirect injection supplementing the direct injection of the FSI, the Audi valvelift system (AVS) to adjust the valve stroke on the exhaust side and thermal management, which uses a rotary valve module and an exhaust manifold integrated into the cylinder head. 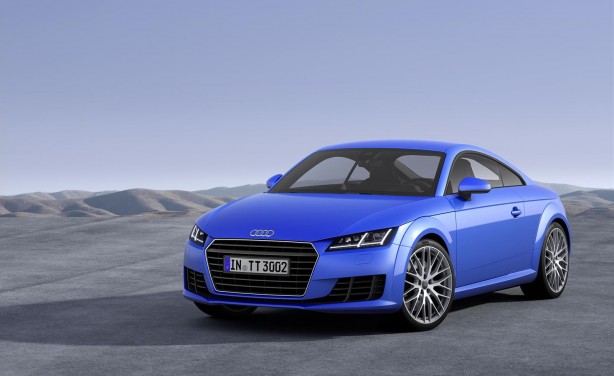 On the version with six-speed S tronic and quattro all-wheel drive, the key figures are as follows: the sprint from 0 to 100 km/h takes 5.3 seconds; top speed is 250 km/h; fuel consumption of 6.8 litres per 100 km and CO2 emissions of 159 g per km. The dual-clutch transmission shifts through the six gears without any noticeable interruption in traction, and in manual model it can be controlled by paddles on the steering wheel. In the “efficiency” mode of Audi drive select, the S tronic selects freewheel as soon as the driver takes his or her foot off the gas pedal.

The Audi TTS is a peak performer. It covers the standard sprint in 4.7 seconds; its top speed is electronically governed at 250 km/h. The 2.0 TFSI produces 380 Nm of torque at an engine speed of between 1,800 and 5,500 rpm. Controllable flaps in the exhaust system modulate the sporty sound and make it even richer. A manual transmission is standard. The S tronic option includes launch control, which regulates maximum acceleration from a standstill.

The third-generation Audi TT will arrive in Australia in the first quarter of 2015, with local specifications and pricing announced closer to launch.