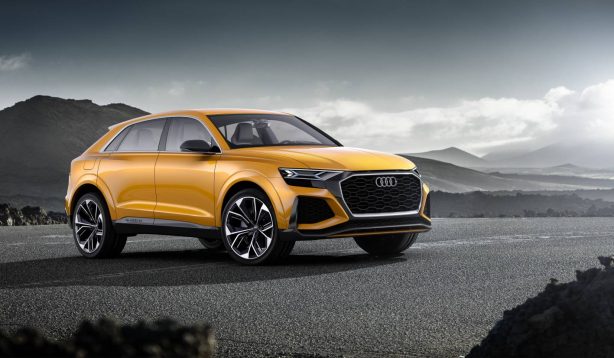 The new Audi Q8 concept model range has extended to include a sportier derivative – the Q8 sport concept. Unveiled today at the Geneva motor show the Q8 sport concept is designed to demonstrate the vision Audi’s developers and designers have for the “dynamic yet efficient” SUV of tomorrow.

While the Q8 concept is powered by a plug in hybrid drivetrain, the Q8 sport concept gets a high output “mild” hybrid powertrain comprises of a 3.0-litre TFSI V6 petrol engine producing 331kW, paired with an electric motor that serves an additional 19kW of power and 170Nm. Driving all four wheels through an eight-speed automatic transmission the complete system serves up 350 kW and 700 Nm of torque. 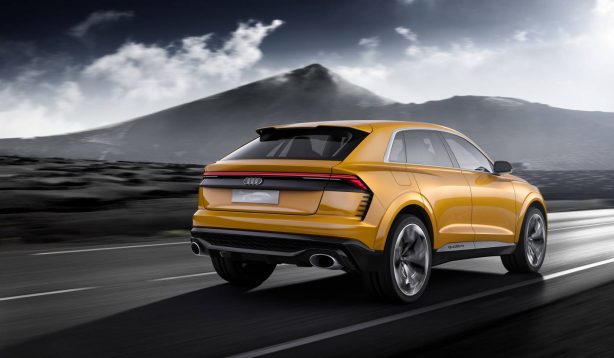 The front view of the 2.04-metre-wide Audi Q8 concept is dominated by the octagonal Singleframe grille with honeycomb insert. Heavily sculpted and significantly wider than in today’s Audi production models, the new grille is structured by six upright double bars and framed by a contrasting coloured mask. The outer air inlets have a deep and dynamic appearance like the intakes of a turbine. A distinctive aluminium blade forms the bottom edge of the bumper.

The new grille is flanked by the flat, wedge-shaped headlights, which are integrated progressively into the exterior and connected to the surrounding air inlets.

At 5.02 metres long, the Q8 sport concept’s elongated silhouette features a flat and wide C-pillar reminiscent of the Audi Ur-quattro from the 1980s. Strongly flared shoulders over the wheels are typical quattro design.

Highlight of the rear styling is no doubt the strip of lights extending over the entire width of the rear end, which Audi says is part of a distinctive e-tron light signature. It serves as both the tail and brake light as well as the dynamic turn signals. The four outer lighting elements are set in aluminium blades and reflect the semantics of the headlights. 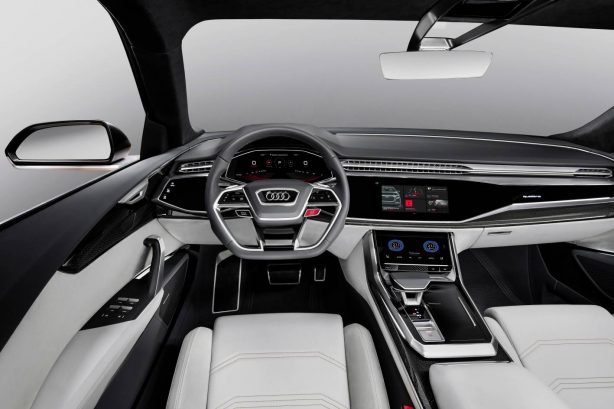 With seating for four, the wrap-around cabin debuts the second iteration of the Audi Virtual Cockpit digital instrument display. With a resolution of 1920 x 720 pixels the improved 12.3-inch display offers more space for maps, lists and additional information.

In “Auto” mode the top-down map view visualizes the selected route. When zooming in, the current position and surroundings are displayed in 3D. Through the buttons on the steering wheel, the driver can switch to “performance” mode. The needles of the speedometer and powermeter now appear in a foreshortened, three-dimensional display.

The Audi Q8 concept range is expected to enter production in 2018 to take on the BMW X6, Mercedes GLE Coupe and the recently unveiled Range Rover Velar.