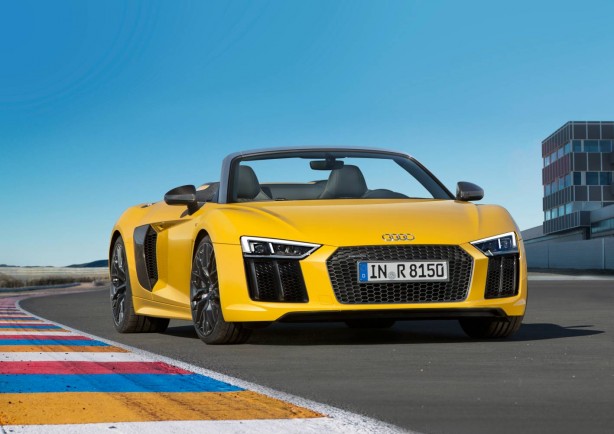 The German automaker, Audi has unveiled their latest supercar; the R8 Spyder.

The Spyder is based around the R8 coupe, however, its aluminum and carbon fiber chassis has been modified to make up for the lack of a structural roof line. The A-pillars, windshield surround and sills are all reinforced, improving rigidity by up to 50% while still achieving a kerb weight of only 1,612kg. Comparing to the 2009 model, the new Spyder is actually 113kg lighter. 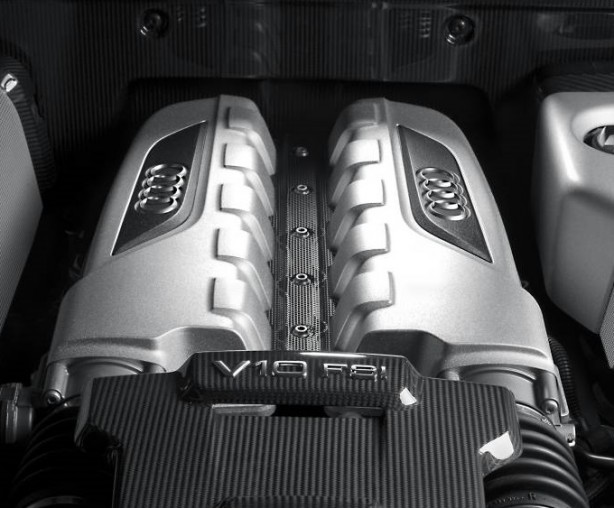 Under the hood, the Spyder receives the same V10 as found in the coupe variant. The naturally aspirated 5.2-litre engine produces 397kW of power and 540Nm of torque at 6,500rpm. Audi claims a 0 to 100 km/h time of just 3.6 seconds, with a top speed of 318 km/h. Audi has also mentioned fuel efficiency is 10% better than its predecessor thanks to a new freewheeling mode, where the R8 coasts with the engine decoupled. In mixed driving conditions, the vehicle should consume 11.7 L/100km which is decent considering the engine size.

Appropriately paired to the powertrain is a seven-speed S tronic transmission. The dual-clutch transmission directs forces to a newly designed Quattro all-wheel-drive system featuring an electro-hydraulically activated multi-plate clutch at the front axle. The all-wheel clutch, distributes the drive torque based on driving condition; in extreme cases, up to 100 percent to the front or rear wheels. The vehicles driving characteristics can be altered on the fly via the inbuilt Audi drive select system. The system offers four modes ranging from dynamic to comfort-oriented configurations. 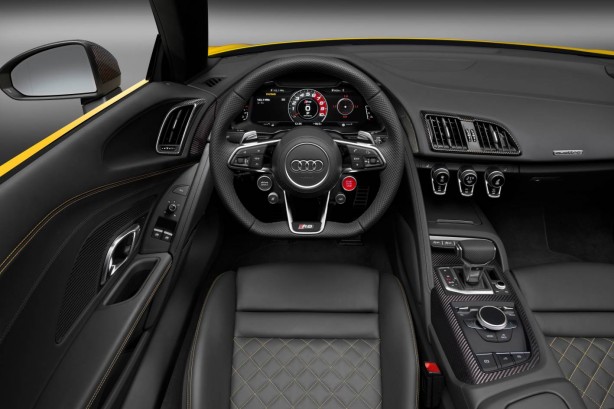 From the driver’s seat, most of the vehicle important functions can be accessed without having to take hands off the steering wheel or look away from the road. The now standard 12.3-inch, virtual cockpit presents all relevant information using rich 3D graphics. The MMI navigation plus and MMI touch come standard, as are belt microphones to be used for voice control and hands-free.

Making its entrance with the Spyder is Audi’s smartphone interface, a new technology making it possible to display content from a supported smartphone directly in the Audi virtual cockpit. From the middle of this year, this option will extend to the R8 coupe. Additionally, Audi connect will be included allowing online media streaming and retrieval of real-time traffic information via LTE. 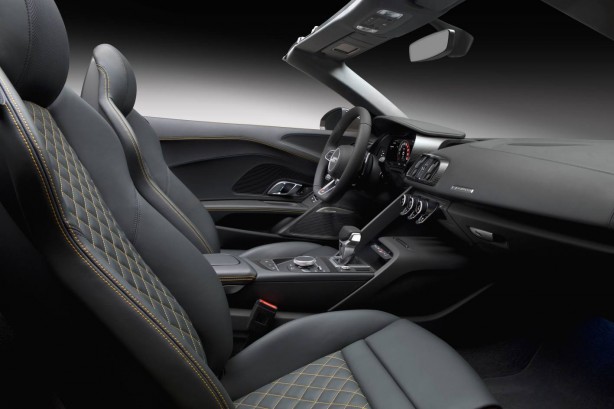 The vehicle is largely hand-built attributing to the high build quality. Both the driver and passenger sit on bucket seats with a highly contoured shape, improving lateral support. Audi also gives customers almost unlimited customisation options to tailor the interior and exterior to their individual tastes. A range of add-on body components such as the front spoiler, diffuser and the new side blades are also available in carbon. LED headlights with their newly developed laser technology maximises visibility and range for the driver, bringing increased safety at night.

A Bang & Olufsen Sound System will also become standard with the Spyder. To improve audio while the roof is down, Audi has integrated two head restraint loudspeakers into each seat.

The new Audi R8 Spyder will arrive in Australia in the first half of 2017. Audi is keeping tight-lipped on pricing and specification details until closer to the vehicle’s local launch.