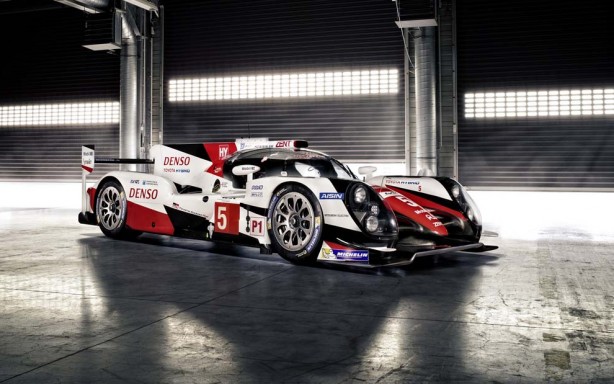 The TS050 is Toyota’s third vehicle since joining the World Endurance Championship (WEC) back in 2012, it features a 2.4-litre twin turbo direct injection V6 petrol engine combined with a high-capacity 8MJ hybrid system producing a combined output of 735kW.

Similar to the road going Toyota hybrids, the TS050 implements regenerative braking in both the front and rear electric motors in order extend the electric range. The recuperated energy is stored in a high-powered lithium-ion battery and releasing it as a high-efficiency performance boost.

Previous Toyota prototypes employed super capacitors for their energy storage, the move to a lithium accumulator allows the team to compete in the more powerful 8MJ hybrid class.

The new powertrain brings with it different cooling and packaging demands, including an updated transmission to handle the increase in torque delivered by the turbo engine.

The placement of certain powertrain components also play significant roles in aerodynamic optimisation. For instance, relocating the front motor helped improve under-floor airflow. Revising the suspension kinematics also proved to be a positive change as tyre wear will be reduced throughout the endurance.

Lack of testing always plagues teams come competition, however, team Gazoo has already covered more than 22,000km in the TS050, with issues discovered and fixed early in the testing cycle.

Toyota Gazoo Racing will field two TS050 hybrids for the nine-race 2016 WEC season, kicking off at Silverstone in the UK on 17 April.