The highly anticipated Lexus NX compact crossover has finally broken cover. Evolved from the controversial Lexus LF-NX concept introduced at the Frankfurt International Motor Show and the Tokyo Motor Show in 2013, the NX is Lexus’s first entry into the luxury compact crossover segment.

Designed under the development concept “Premium Urban Sports Gear”, the NX was developed as a sport utility vehicle with “high functionality and an edgy design fitted perfectly to an urban lifestyle”.

Unusual for a car company well known for mundane design in the past, the NX’s new breath of bold styling places emphasis on the tires by fusing the front and rear wheel flares to the solid, muscular vehicle cabin beginning from the spindle grille.

The side profile is accentuated by a peaked roofline set towards the rear, a design similar to the its bigger sibling, the RX. Lexus claims the design creates a powerful silhouette while simultaneously providing ample head-room for rear seat occupants.

At the back, the L-shaped LED rear combination lights and a spindle-grille-themed rear tail gate mirror those at the front.

An innovative outer mirror and a world-first door handle mechanism (with a hidden key barrel and integrated lighting) add to the luxury appearance.

The fresh and modern exterior is echoed inside with a cabin that fuses synthetic leather and silver metal frames for a strong yet refined atmosphere.

The NX features the second iteration of Lexus’ Remote Touch Interface, with a touch pad functionality that promises to be more user-friendly. 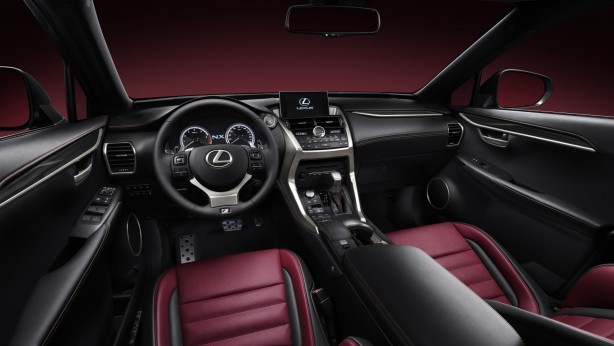 The Lexus NX will also debut a new wireless charger in the center console for smartphones and other mobile devices, accompanied by a Panoramic View Monitor, comprehensive Multi-information Display, G sensor display and boost pressure meter.

Lexus is set to showcase the NX compact SUV at the 2014 Beijing International Automotive Exhibition from April 20 to April 29. The brand will exhibit the NX 200t equipped with a newly developed 2.0-liter turbocharged four-cylinder engine and the NX 300h equipped with a 2.5-liter hybrid system.