Lexus will unveil the LF-NX compact SUV concept at the Frankfurt Motor Show next week. It will be the carmaker’s first compact SUV to challenge the likes of BMW X1 and Audi Q3. As with all Lexus concept, the LF in the concept’s name denotes Lexus Future, while the NX is likely to be the name of the production model.

Unique corner styling separates the bumper from the front wing with an aggressive vertical cut. In profile, the LF-NX features a pronounced diamond-shaped belt line, while the glasshouse creates a coupe-like silhouette.

The rear features stylised lamp clusters that are detailed to project downwards to the full depth of the bumper, creating a sharp, aerodynamic trailing edge.

The Lexus LF-NX concept is finished in a new Brushed Metal Silver exterior colour which gives the striking impression that the body shell has been carved from a single billet of solid metal.

The extroverted exterior styling is carried into the cabin with bold, powerful forms creating a driver-focused cockpit within an ergonomic environment. 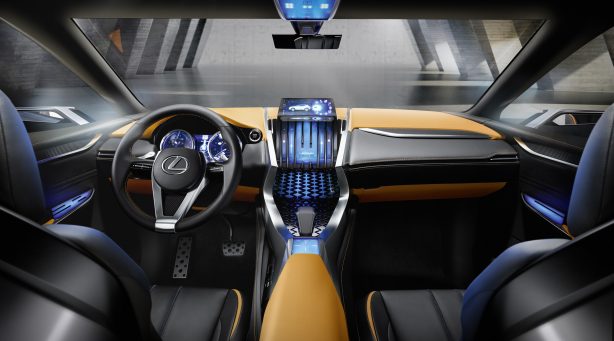 In a continuation of the ‘Human Oriented’ L-finesse design concept, the cabin dash is divided into an upper display zone and lower operation zone – a design honed over successive Lexus generations.

The design allows for intuitive interaction with the vehicle’s next generation technology, which includes a touch-sensitive electrostatic switch, and a new touch pad Remote Touch Interface (RTI) design.

Reinforcing the LF-NX crossover credentials, the strength and refinement of the interior’s carved metal surfacing is complemented throughout by Sunrise Yellow / Black leather accented upholstery with contrast stitching, and sophisticated blue instrument lighting.