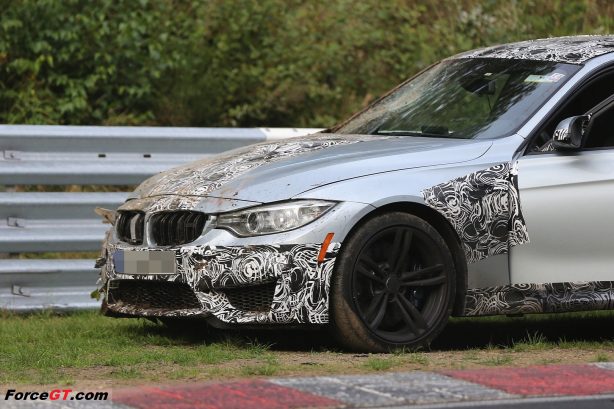 Only yesterday BMW released new technical details on the upcoming 2014 BMW M3 sedan and M4 coupe. Today a pre-production M3 sedan has crashed during a test session at the Nurburgring circuit in Germany.

The BMW M3 sedan crashed ten minutes before the end of the session when the driver lost control of the sports sedan and hit the right side guard rail at a section of the track called Metzgesfeld. Thanks to modern vehicle safety technology, the driver of the M3 sedan escaped with no injuries.

The BMW M3 can be seen from the photos sustaining some damages to the front side including front bumper, headlight and windscreen. The car was transported back to BMW’s technical centre in an enclosed trailer. 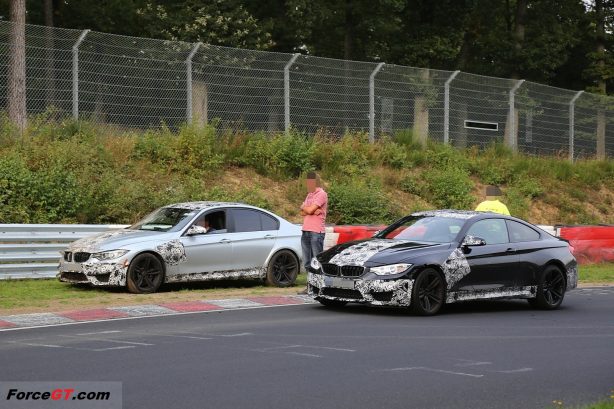 Details released by BMW yesterday revealed that new M3 and M4 is powered by a new 3.0-litre twin-turbocharged inline six producing “approximately” 316kW of power and 500Nm of torque that the company says is maintained over a very wide rev band.

BMW has also confirmed that the new M3 and M4 will be offered with a six-speed manual as standard, with a seven-speed M Double Clutch Transmission available as an option.

We will bring you more details of the new 2014 BMW M3 and M4 when the cars bows in early next year.