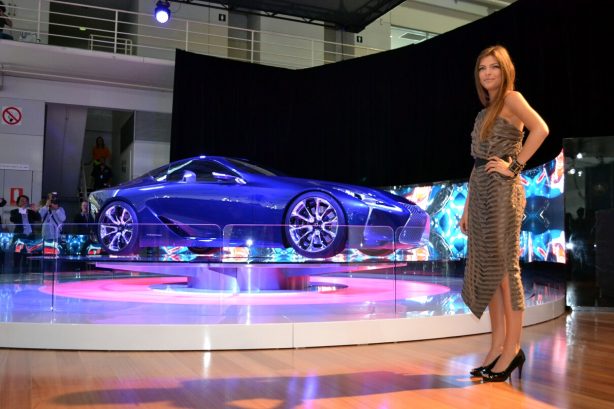 The stunning Lexus LF-LC hybrid concept has made its Australian debut at the 2012 Australian International Motor Show Media and Industry day in Sydney today. The hybrid sports coupe from the Japanese luxury marque provides a glimpse into its design future. The LF-LC Blue displays a striking balance of new and traditional designs and showcases the company’s strong commitment to push the boundaries of performance, style and technology. 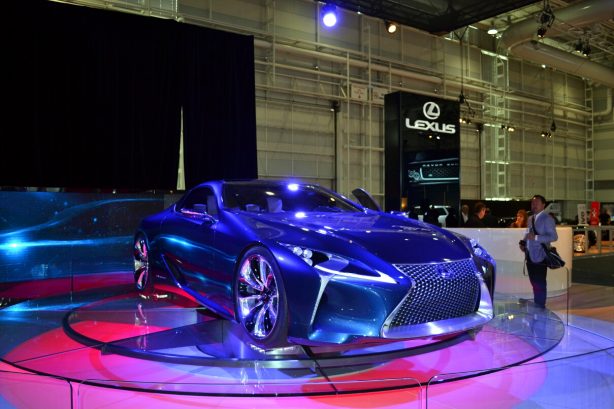 “The designers and engineers at Lexus continue to think outside the box with their cutting-edge concept vehicles,” said Russ Tyrie, Event Director.

“The LF-Gh concept on display at Melbourne last year was a prime example of this, yet Lexus will raise the already-high bar yet again, with their global reveal in Sydney.

“We are thrilled Lexus have chosen the Australian International Motor Show as the stage to unveil this concept and we know all visitors to the Show will be excited by its head-turning exterior style lines, driver-focused, advanced interior and superior performance,” Russ adds.

The all-wheel drive LF-LC hybrid concept will have an output of 370+ kW of power and previews the company’s future of supercars and their use of carbon and aluminium body chassis.

The LF-LC is finished in a striking blue metallic paint job inspired by opal stone of the Australian outback. The special paint job was finished just days ago before today’s unveiling at the 2012 Australian International Motor Show.

SYDNEY, Australia, Oct. 18, 2012 – Australia Lexus has revealed the stunning LF-LC Blue concept at the Australian International Motor Show in Sydney. Clad in unique Opal Blue, it is the second version of the LF-LC, first debuted at the Detroit Auto Show earlier this year.

The all-new Opal Blue exterior is inspired by the lustrous base colour found in the naturally occurring semi-precious opal stone of outback Australia.

Beneath the blue skin LF-LC combines advanced technologies and materials with organic design, giving an insight into what the future of sports cars may hold. Central to the concept is a suite of advanced materials and technologies, including lightweight carbon fibre and the next generation of Lexus’ industry-leading hybrid powertrain.

Dubbed Advanced Lexus Hybrid Drive, the system features a powerful and efficient Atkinson cycle combustion engine which is mated to an advanced high-energy battery pack. The high-energy battery pack is designed to deliver greater power from a smaller battery than those currently used in Lexus’ range of hybrid vehicles. Combined, the LF-LC Blue concept’s petrol/electric hybrid powertrain develops 372kW (500hp) – the most of any Lexus hybrid.

Lexus Australia’s Tony Cramb said that LF-LC Blue is a demonstration of what the future may hold for sports cars.

“For decades, Lexus has been synonymous with hybrid drivetrains, superior build quality, comfort and reliability,” Cramb said. “With the LF-LC we now reinforce our design and technology credentials. The LF-LC is absolutely stunning. Its good looks mask some very exciting design and engineering innovations that will influence Lexus vehicles in the future.

“LF-LC is part concept, part reality: the concept hints at what’s to come from Lexus, while the reality has us actively studying how we can engineer and build a vehicle like this in the future.”

Continuing the sense of motion, LF-LC’s side profile is commanded by deeply sculpted air intakes behind the doors. A wrap-around glass roof provides a panoramic view to the outside world while slicing through the air.

The concept car’s glass roof features a lightweight, cantilevered pillar with a glass-to-glass junction inspired by modern architecture. LF-LC’s dynamic lines are carried through to the rear deck, sculpturally integrating the spindle grille theme to complement the front of the vehicle while creating a unique sense of width. Tail lamps, inspired by a jet aeroplane afterburner, make use of inner lighting to create a remarkable sense of depth.

The rear is also fitted with fog lamps, repeating the fading dot matrix pattern of the front fog lamps. Visually, the integrated tail and fog lamps repeat the “L” shape and lead the viewer’s eye down to the powerful Lexus quad exhaust.

The interior of the LF-LC concept contrasts the cool ambience of advanced technology with soft textures and organic shapes to create a driver-focused synergy of form and function. The cockpit expresses a feeling of both openness and security. The driver is enveloped by deeply scooped side panels and a high, curved console. The effect is to focus the driver zone on the controls and on the road.