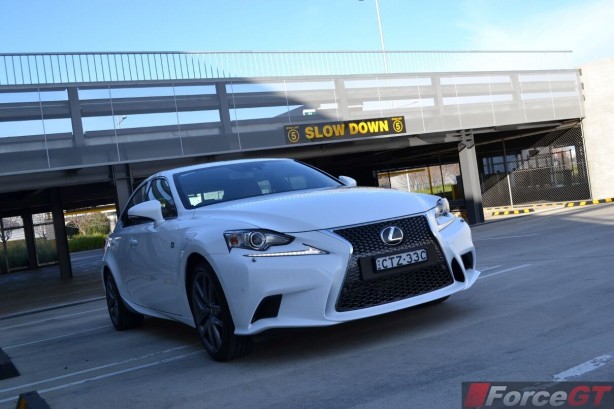 The luxury midsize sedan segment is a rather tricky one to get right. Buyers in this segment want style, quality, premium features, the latest technologies, sophistication and a general sense of sportiness.

Yes, pretty much everything. And the 2015 Lexus IS 350 ticks all the boxes. The problem is it’s got an extremely tough competition set, comprising none other than the German trio – BMW 3 Series, Mercedes-Benz C-Class and Audi A4.

In the brand’s 25 years of “relentless pursuit of perfection”, Lexus looks to have found the last piece to the jigsaw – driver engagement, as the third generation IS has been injected with a huge dose of it in the form of an F Sport variant.

This puts the IS 350 F Sport right next to the BMW 335i in terms of performance, and the latter is a whole $20k dearer. 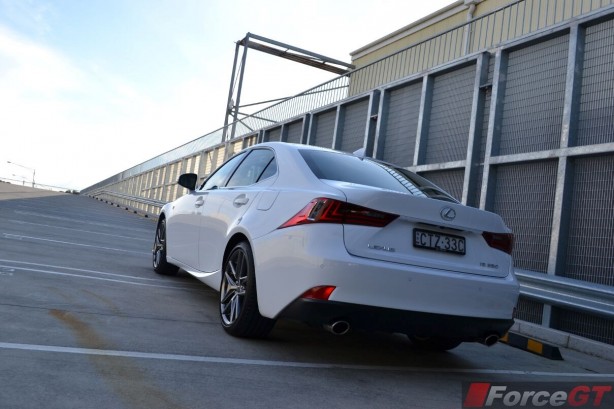 The F Sport’s sportier intention is conveyed through a more aggressive treatment of the front bumper and Lexus’ trademark spindle grille.

The full mesh grille is unique to the F Sport and features a larger lower section to aid cooling. The lower grille is flanked by aerodynamically-styled ducts on either side, with the inner intakes channelling airflow to the front brakes while the outer ones squeeze air over the front tyres. It’s a perfect example of form follows function.

The F Sport-exclusive 18-inch alloy wheel design is inspired by that of the LFA supercar, with a dark gun metal finish and Y-shaped spokes. And boy do they look good! 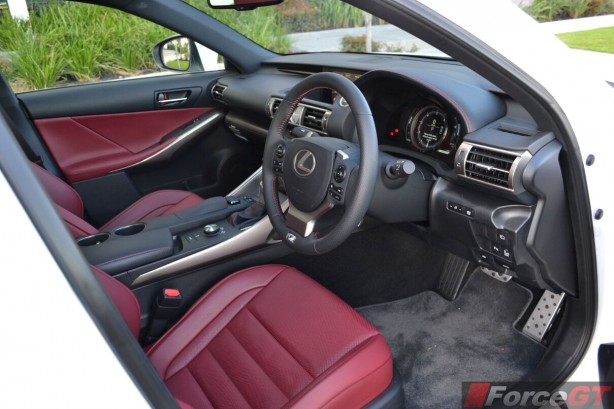 The F Sport cabin boasts a purposeful premium ambience with a high level of attention to detail typical of Lexus. We like the superbly comfortable and supportive front sport seats. You sit low and tight, like you would in a sports car.

But the coolest bit of the whole F Sport interior is the LFA-inspired digital instrumentation. It has a motorised meter ring that slides across to reveal a menu at the press of a button on the steering wheel. We simply can’t get enough of this, as we find ourselves often pressing the button for no obvious reason other than to watch the sliding circular gauge in action! 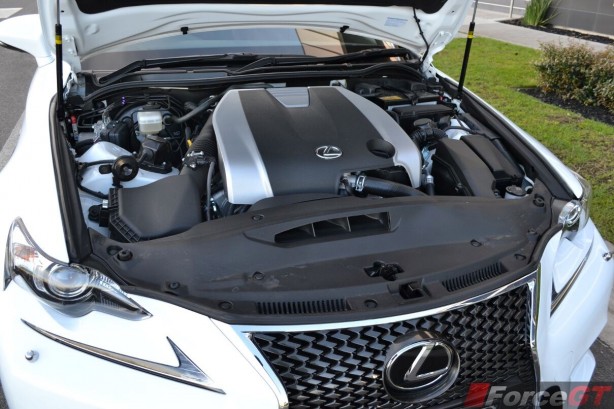 The 3.5-litre V6 features both direct and port injection. From the get-go all the way to its red line the V6 is perfectly smooth. At the upper rev range, it sounds satisfyingly meaty, too, thanks to an engine intake resonator.

The big V6 drives the rear wheels via a smooth eight-speed automatic transmission that blips the throttle on downshift. It has no problem picking the correct gear in all occasions and is even smart enough to hold a lower ratio through a corner thanks to a built-in G-sensor, giving you immediate response to power out of the apex.

The only complaint we have for the gearbox is its tendency to upshift automatically 200-300 revs before the red line, even in manual mode. This is rather annoying when you shift up manually and the next thing you know is you are two gears up because the transmission has already done it for you just before you pull the pedal shifter. 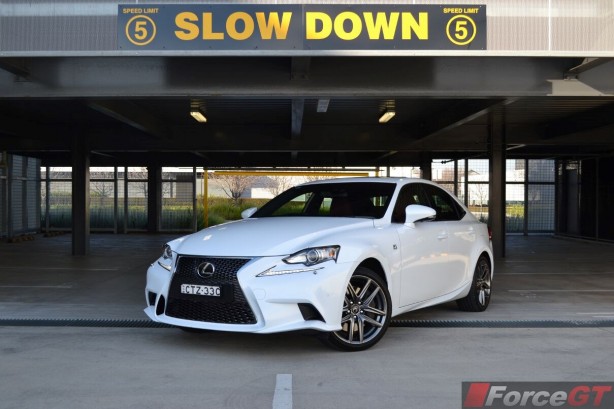 Unlike the torque-ridden turbocharged motors of its European rivals, the donk in the Lexus does require a bit of work before it lets off its punch, as most of the torque is available higher up in the rev range. But when really put to the whip, the V6 is more than willing, ripping from rest to 100km/h in a rapid 5.9 seconds.

Despite with eight gears, fuel consumption falls short of class expectation, with the trip computer reporting an average of 12.5L/100km after a week of mixed city and freeway driving. There is no idle stop/start or cylinder deactivation.

There’s also the Sport + mode that sharpens the throttle response, firms up the suspension and increases steering feedback. 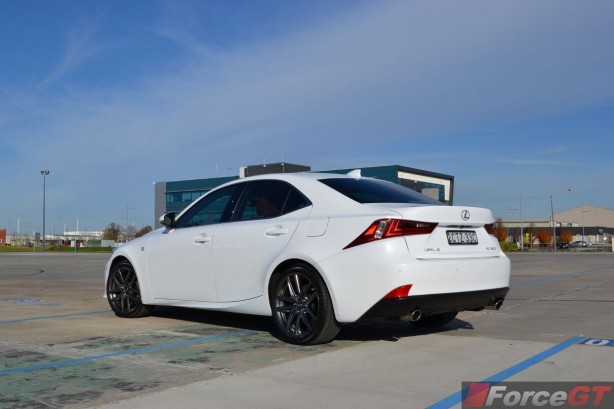 Switch everything to the sportiest setting, the IS 350 F Sport is indeed one hell of a drive. The steering is fast and direct. The brakes are unexpectedly strong and fade-resistant, even under the heavy torture of track work. There’s also abundance of grip from those Bridgestone rubber.

Change of direction is carried out with utmost eagerness and the car’s behaviour is entirely predictable. No doubt, the poise and balance the Lexus carries around the bends will even embarrass some purpose-built sports cars.

Such is its confidence inspiring handling and planted nature that for a second you forget you’re in a four-door family sedan.

The only criticism we have is the overly sensitive and invasive electronic stability program (ESP), cutting in every time we entered a corner faster than the computer liked us to. 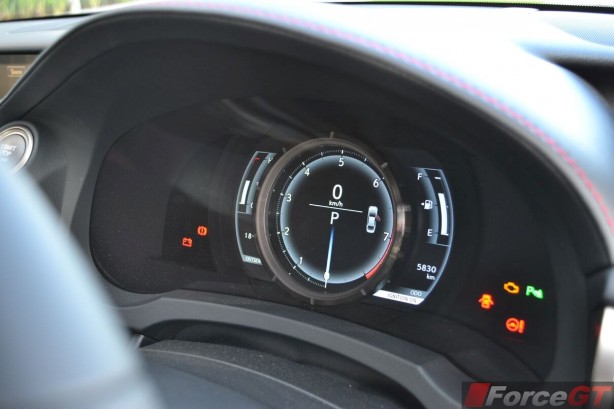 Unlike most sport-tuned suspension, the adaptive dampers in the F Sport still offer an upscale ride quality that is both supple and refined. It’s firmer than the standard IS but far from edgy.

As can be expected from a Lexus, the IS 350 F Sport is comprehensively equipped. Standard features include dual-zone climate control, heated and ventilated front seats, Bi-xenon headlamps, keyless entry, power-adjustable front seats and steering column, sat-nav, reversing camera, digital radio tuner and a 15-speaker Mark Levinson sound system that is a cut above.

The 2015 Lexus IS 350 F Sport is an incredibly capable sports sedan that might just be able to put the BMW 3 Series M Sport on high notice.

Lexus Chief Engineer for the Lexus IS, Junichi Furuyama said: “I had one goal above everything else when developing the latest generation Lexus IS: make it fun to drive.”