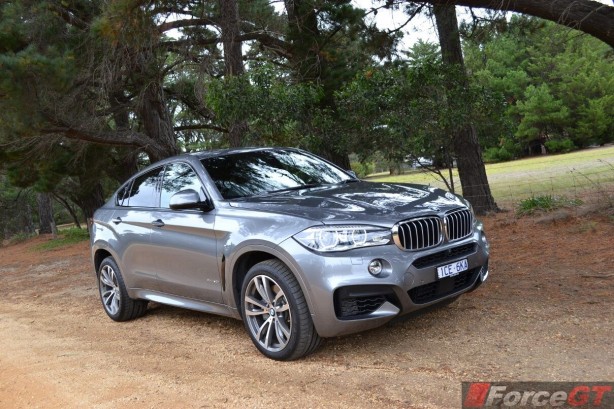 The BMW X6 is a car that fits no category. It’s not a coupe, it’s not an SUV, and it’s not a sedan. BMW calls this new type of mobility the Sports Activity Coupe (SAC). While other carmakers have also ventured into unexplored territory, only to switch back to mainstream after the first attempt, BMW has managed to bring this niche model to its second generation.

The original X6 was introduced in 2008 to much criticism for its strange design and confused intentions. But the controversy also brought the X6 heavy attention, which eventually converted to sales, to everyone’s surprise.

So, the SAC is here to stay and the new 2015 model continues to lure buyers with its unique position as a cross between a SUV and a coupe.

Accompanying the xDrive 35i in the midrange is the xDrive 40d with a sticker of $128,400. It’s propelled by a six-cylinder 3.0-litre twin-turbo diesel engine developing 230kW and 630Nm.

The two top-spec high performance models supplied to us for this review consisted of the petrol-powered X6 xDrive 50i and the diesel-fuelled X6 M50d, respectively priced from $151,600 and $157,900 excluding on-roads.

When you buy the X6 over the X5 (on which the X6 is based), you are trading practicality for style. And we are glad to say for the second generation X6, the trade-off is justified.

The bold front end is mostly similar to the X5 (which is a good thing), dominated by a wider kidney grille which now extends to the new standard Adaptive LED headlights. The swept back coupe-style roof line highlights the car’s distinctive aesthetic, while the strong flat rear apron emphasises the X6’s wide track and road-hugging stance. 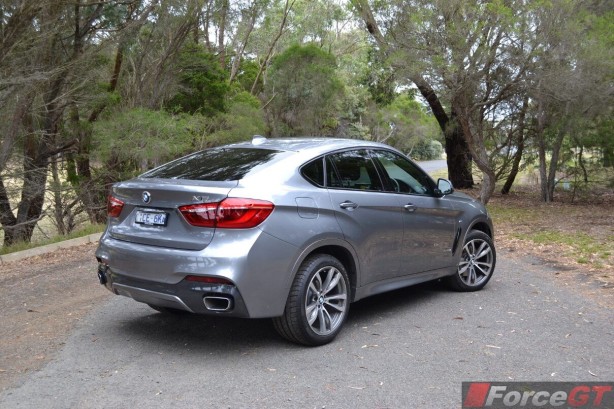 There are also successful styling elements that have a functional edge, such as the newly introduced “Air Curtains”. Positioned at the outer edge of the front apron, they are designed to reduce drag by directing the air around the wheel arches to create a curtain of air over the wheels. The air is then eliminated through stylish “Air Breathers” behind the front wheel fenders.

The interior is also carried over almost entirely from the X5 and is beautifully executed. The layered dashboard blends the typical BMW modern and contemporary design with functional layout and uncluttered clarity.

The materials used throughout the cabin feels premium, with soft touch surfaces extending to the lower parts of the dashboard and doors. There’s also the groovy wrap-around mood lighting with nine customisable colour themes, setting the tone for cosy night drives. 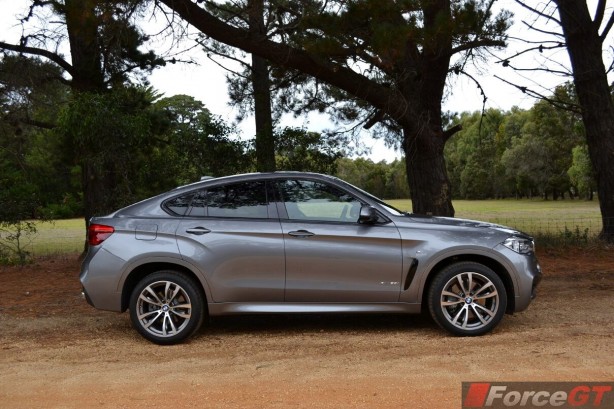 Unlike the previous model, which is a four-seater unless the three-seat rear bench option is ticked, the new model offers comfortable seating for five as standard.

The front occupants cocoon in the superbly comfortable and supportive front seats, while rear seats passengers are similarly well accommodated with their own separate climate control and seat heating (outboard seats), though rear headroom is a little scarce due to the plunging roof line.

Storage compartments are plenty around the cabin, with vast centre storage and deep door pockets that are able to swallow a large water bottle.

Popping open the automatic tailgate reveals a sizeable 580 litres of boot space, which is welcomingly flat and square for easy loading. Tumble the 40/20/40-split folding rear seats and this space expands to 1525 litres, an increase of 75 litres over the previous model, but a significant 345 litres less than the X5. 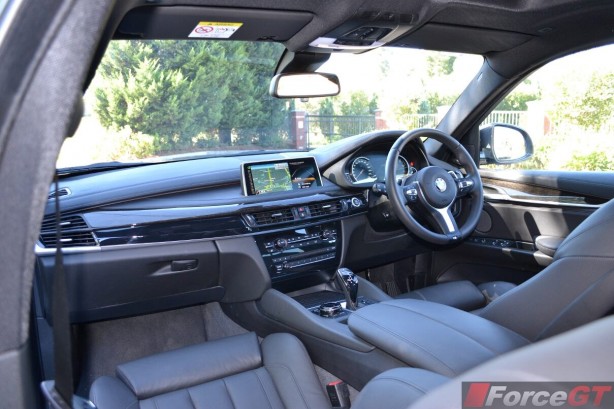 A range of new petrol and diesel engines power the new X6 with greater efficiency.

The blown petrol V8 packs enormous punch, with maximum torque available from just 2000rpm. On the road, this translates to a 0 to 100km/h sprint time of just 4.8 seconds (0.6 seconds faster than previously), which is simply astounding for a 2.2 tonne crossover.

On wide open throttle, the V8 pulls hard all the way to its 6000rpm redline, with no signs of losing puff, and on the back of one of the nicest engine notes since that from the E60 M5 V10. 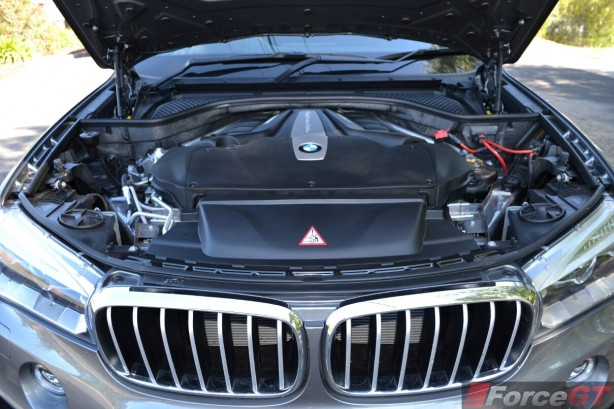 Although the outputs of the triple-turbo, six-cylinder, 3.0-litre diesel engine in the X6 M50d remain unchanged at 280kW and 740Nm, the car also benefits from BMW’s EfficientDynamics technologies with fuel consumption reduced by 14 percent to 6.6L/100km (tested 10.6L/100km)

What we like most about the M50d’s magnificent powerplant is its effortless and smooth power delivery. There is just mammoth and mammoth of torque in the midrange, making the diesel six a more versatile unit than the petrol V8.

The engine howls with a nice deep gurgle that is quite un-diesel-like. Its willingness to rev also encourages you to explore the higher reaches of the engine, extracting every kilowatt that’s hiding deep within its inner workings. 100km/h will arrive from rest in a hot-hatch beating 5.2 seconds.

All engines are paired with an amazingly smooth and quick eight-speed automatic transmission, sending power to all corners through a full-time all-wheel-drive system with variable torque-split.

All X6 models are equipped as standard auto stop/start that shuts down the engine when the vehicle comes to a temporary stop. The system is quick to fire up the moment the brake pedal is released for a smooth takeoff. 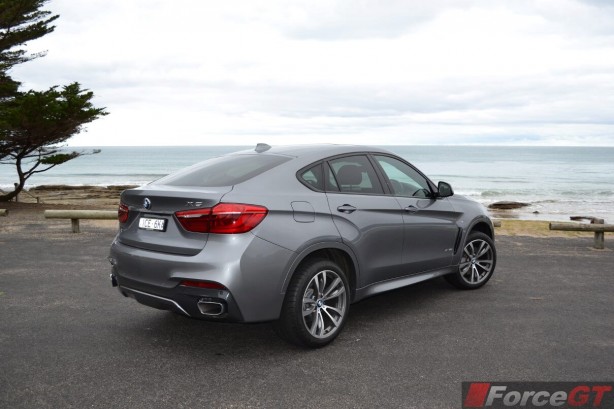 Imagine a high-riding crossover than handles like a hot-hatch. The X6, despite its hefty weight, is one of those few crossovers that can be fully enjoyed in motion. Unlike an SUV, the tracksuit-wearing SAC is not afraid of scything through corners at spirited speeds, with very little body roll and masses of grip.

You still feel the car’s heft when rustling from corner to corner, but the chassis is rigid and direction changes are carried out with the kind of poise and precision uncommon for cars of this size.

The brakes – six-piston callipers at the front and four in the rear – provide ample stopping power, with a progressive feel through the pedals.

The thick-rimmed steering is nice to hold and properly weighted, but it can do with a bit more feedback.

Four driving modes are available – Eco Pro, Comfort, Sport and Sport+, the latter two sharpen up the tiller and throttle response as well as firm up the optional adaptive M suspension (standard in the xDrive 50i and M50d).

The ride over undulating surfaces is a tad jittery, even in Comfort mode, but on smooth roads, the car is generally calming and tranquil. Cruising at speeds, the X6’s cabin is remarkably quiet, too, despite the car’s 20-inch rolling stock. 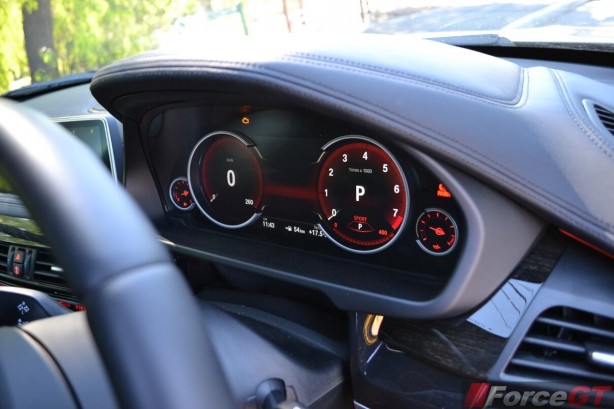 BMW has increased the level of standard equipment for the new X6.

The xDrive 30d, xDrive 35i and xDrive 40d now come standard with Adaptive LED headlights and ConnectedDrive features including Driving Assistant – a camera-based system providing Lane Departure Warning, Collision Warning and Pedestrian Warning with light city braking function – and Intelligent Emergency Call that uses the built-in SIM card to automatically call and transfer data to the ConnectedDrive Call Centre in the event of an accident.

The X6’s voice command system is one of the best we have sampled. It’s recognizes most commands first time without a glitch.

The same can’t be said about the Head-Up Display. BMW’s engineers must have forgotten to test the display with polarized lens as the display becomes illegible once you slip on your sunglasses.

Of course with a BMW, the option list is almost as long as its standard equipment. Want an electric glass sunroof? That will be $3,500, sir.

The second generation BMW X6 is a niche model that still doesn’t quite make sense, but its appeal is now lifted by improvements in almost all areas – more attractive design, better engines, sharper handling, more features and even better built.

However, options are expensive, rear space is limited and the ride still needs a bit more polishing.