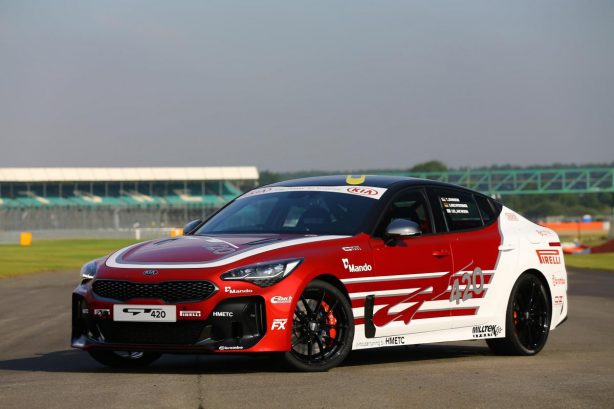 Pre-production homologation vehicles usually meet a crushing death after undergoing countless tests and evaluations to prove the model’s integrity before the production model is approved for sale.

The Stinger GT420 started life as Kia Motors UK’s first evaluation vehicle where it was used for testing and tuning in the UK, before becoming the cover car of many UK publications, as well as being used as a dealer roadshow vehicle, clock up 10,000 miles (16,093km) along the way. 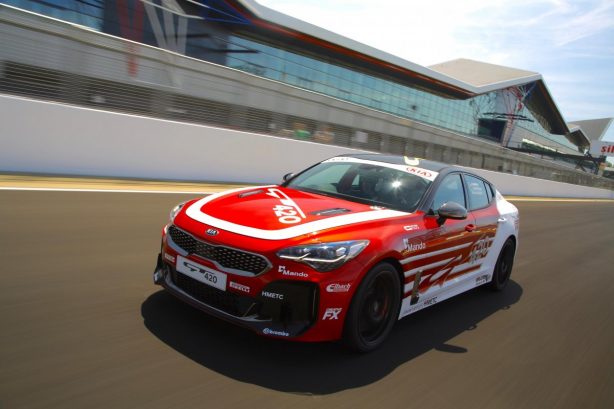 But instead of sending it to the crusher, Kia Motors UK’s technical, product, press relations and press garage team collaborated to give the car a second life, creating the eye-catching ‘Stinger GT420’.

The 50:50 project was completed with the help, advice and engineering knowhow from the Hyundai Motor Europe Technical Centre in Rüsselsheim, Germany. A team led by Head of Vehicle Test and Development, Tyrone Johnson, who is famed for his work on fast hatchbacks bearing a blue oval, until he joined Hyundai Motor Europe in August 2018.

HMETC powertrain team were involved from the start to tune the UK-spec Stinger GT S track car, and they recommended HKS M45il spark plugs for enhanced combustion. A K&N sports air filter and a lightweight Milltek Sport quad-exit exhaust system with catalysts deleted were fitted in place of the factory item. A six-row automatic transmission cooler is fitted, in place of a four-row item, ensuring that the automatic transmission doesn’t overheat and is up to the job on track. The transmission software was recalibrated to have quicker shifting characteristic in Sport and Sport+ modes. These measures bring the vital statistics up to a whopping 315kW and 560Nm of torque. 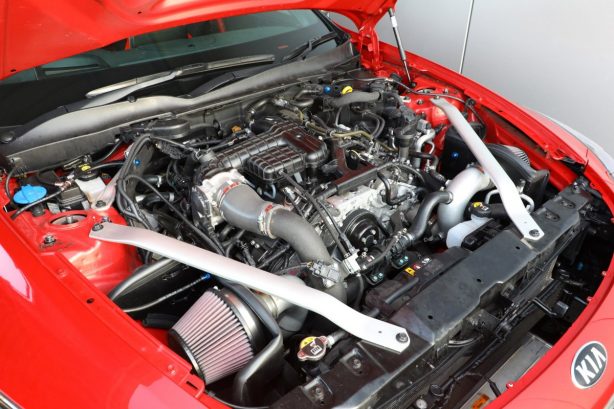 To reduce weight, Kia’s Press Garage in Chippenham stripped out the interior of the Stinger, removing the seats and belts, airbags, sound system, interior trim and rear window regulators. The engine cover, undercovers, parking sensors, boot and bonnet dampers and rear bumper beam and foam were also taken out, while the rear windows were glued into place and lightweight door cards installed.

The Stinger’s sunroof was removed and replaced by a steel panel, shaving off a few more vital kilograms, even after a honeycomb panel was grafted in by Hyundai Motor Europe to add essential reinforcement to the panel. There is a total weight reduction of approximately 150kg after the installation of the roll cage, seats, belts and fire extinguisher. 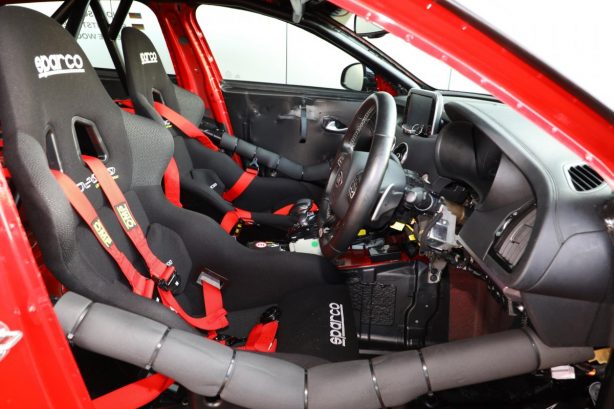 A custom roll cage was installed and painted and the crash pad and necessary electronics re-assembled. Underbody stiffening comprises of a cross bar at the front and a pair of bars at the rear. With the roll cage in place, a pair of Sparco race seats were bolted into place, along with race belts and the all-important fire extinguisher mounted within the cockpit, should the worst happen. Completing the weight saving measures, a Lite Blox LiPo battery is installed to replace the original item, saving 22kgs.

A set of wider OZ Racing Leggera rims shave a further 5kg per wheel, while the Pirelli Trofeo R tyres measuring 235/35/R19 at the front and 265/30/R19 at the rear were selected for maximum grip on track. 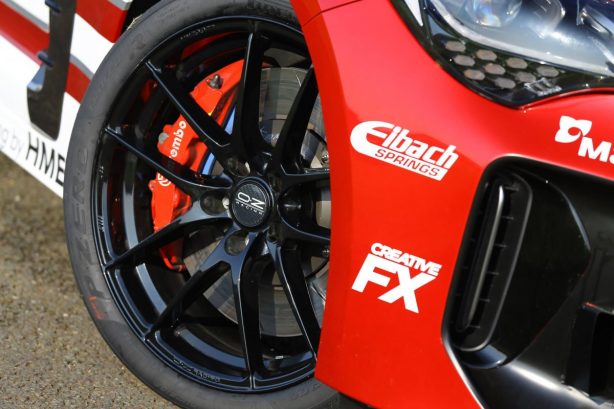 The camber angle was increased to -2.5 degrees by modifying the front cross-member, and uprated front brakes saw Brembo six-pot calipers and racing steel flex pipes fitted, along with high performance 380 x 34mm discs and Endless pads. At the rear, the standard Stinger V6 brakes were utilised. Cooling ducts and deflectors make sure that the brakes have the maximum cooling capacity needed on the race-track and tweaks to the anti-lock brakes, traction control and electronic stability control ensures that they deliver optimum performance for on-track use. Kia Motors UK says in Sport+ mode and by switching the traction control and electronic stability control off completely, the ‘Stinger GT420’ becomes easy to drift.

The standard dampers were used for the racing set up, with Eibach Pro lowering springs and anti-roll bars of 25mm at the front. At the rear, a 17mm in-house anti-roll bar was fitted. The continuous damping control was axed in favor of a conventional damper set up with some fine-tuning. 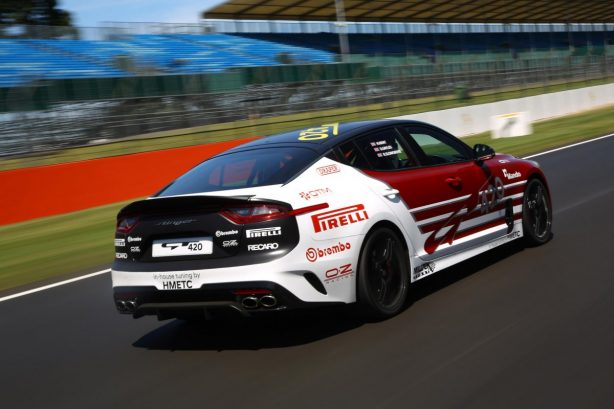 To match the uprated muscles, Kia Press Garage added a Stillen front splitter and rear diffuser, along with a rear spoiler by Air Design. An eye-catching wrap that integrates nicely with the car’s existing red paintwork adds the finishing touches.

Kia Motors UK did not reveal the final cost of the project, except that a ‘definitive price is hard to quantify’.