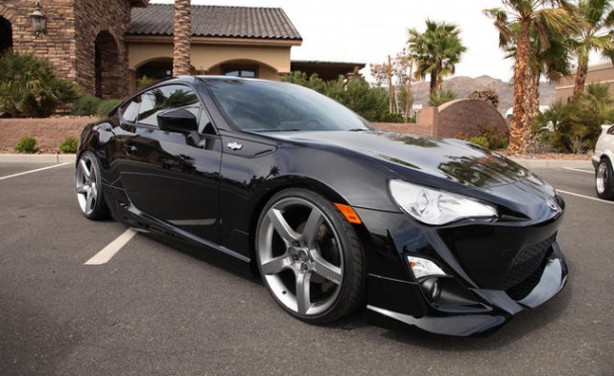 Toyota and Subaru designed the Toyota 86 (Subaru BRZ / Scion FR-S) with an understanding that at least half the people who are going to buy that car are going to modify it in one way or another. There is no doubt the 86 is aimed to string along the release of a whole bunch of aftermarket parts after its launch. In fact, even before its launch, there were scores of tuners from Japan and the US already developing supercharger and turbocharger kits for the sports coupe. This was then followed by a host of aftermarket bodykits, exhaust systems and brake kits. The Toyota 86 is clearly designed for the modding community.

One of the most striking bodykits we have ever seen, without going too over the top, is the Five Axis Scion FR-S Aero Package. The kit features a front lip spoiler, side skirts, rear bumper side extensions and boot lid spoiler. Five Axis will also offer a set if 19-inch wheels and lowering sports suspension to fill up the wheel arches of the FR-S nicely. Also included in the package is a new Five Axis sports exhaust system to give the FR-S a sportier note.

For those of you who are unaware, Five Axis is the same company behind the original FR-S concept. Well known for making extreme bodykits for Lexus. The Five Axis Scion FR-S bodykit may be a little subtle compared to the company’s Lexus offerings, but it still looks fantastic.