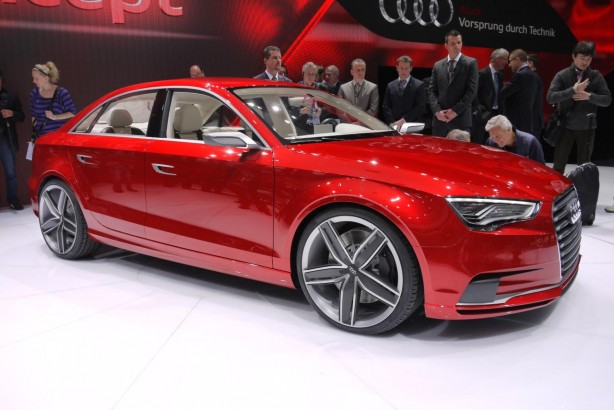 The Audi A3 Sedan Concept has gone from sketches to official photos and now has finally made its way to the Geneva Motor Show for its debut. I must say the car look simply amazing in these live pictures from Geneva.

Based on the current Audi RS3 hot hatch, the A3 Sedan Concept is classed as a high performance compact saloon. And when Audi say high performance they do mean it. The A3 Sedan Concept is powered by a 2.5 liter turbocharged five-cylinder petrol engine delivering a whopping 400 horsepower (300kW) and 500 Nm of torque. Just a few horses fewer than the current RS4. Performance figures are equally impressive. 0-100 km/h in just 4.1 seconds.

The concept rides on huge 20-inch wheels. 19-inch in the production model will be more realistic. As with all sports models from Audi, the A3 Sedan Concept is expected to feature Audi’s well acclaimed Quattro all wheel drive system.

The new A3 Sedan is expected to go on production in the second half of 2012.

Tags a3 audi audi a3