Tesla CEO Elon Musk has confirmed via Twitter that Australian deliveries of the long anticipated Model 3 sedan will commence in mid-2019, a few months earlier than anticipated.

Martin Hungerford, one of many Australian Tesla customers who have put down deposits for the most affordable Tesla model tweeted Mr Musk to clarify updated delivery timing for his Model 3.

“I’ve noticed the delivery date on my Australian reservation has disappeared from the website. It was late 2019, any ideas on when model 3s will be available in Aus,” he tweeted.

In the same series of tweets, Musk also responded to another customer confirming that UK timing would be the same. 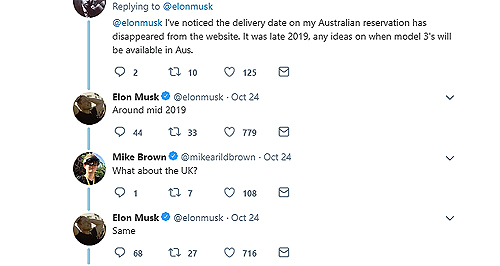 While Australian pricing has yet to be confirmed, expect the base variant of mid-size electric sedan to arrive down under with a sticker of around $60,000 based on the current US dollar exchange rate plus import duties and taxes. The Model 3 currently retails for around $35,000 in the US.

The Model 3 is currently embarking on a nationwide tour in anticipation to its local launch next year, with appearance occurring in major shopping centres including Chadstone in Melbourne, Martin Place in Sydney and Fortitude Valley in Brisbane.