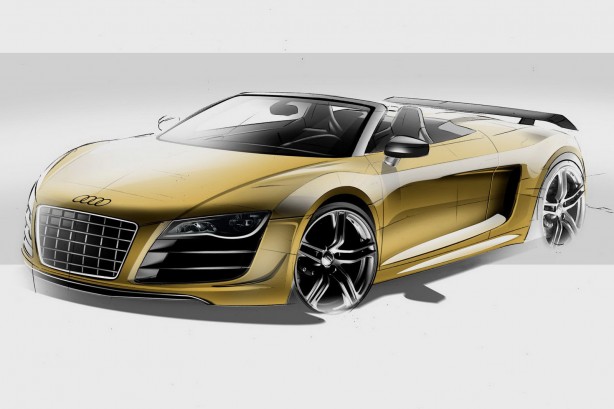 Audi is a busy lot these days. There are no less than 5 new models scheduled to be launched in the next two years. The new A3 saloon and hatchback is due next year, so is the Q3 SUV.

On the upper end of the spectrum, the R8 GT Coupé will hit the market later this year. It will be one of the fastest R8 produced so far, with a top speed of 320km/h. This brings us to the R8 GT Spyder. It is essentially a roadster version of the lightweight R8 GT Coupé.

It shares the coupé’s 5.2-litre V10 engine that produces 412kW of power and 540Nm of torque. In the coupé, this engine propels the car from 0-100km/h in 3.6 seconds. Expect the Spyder to be slightly slower though. The powertrain is connected to the quattro all-wheel drive system via a 6-speed R-tronic DSG gearbox. The car will be rear-wheel biased with 85 percent of torque being directed to the rear wheels under normal driving conditions. 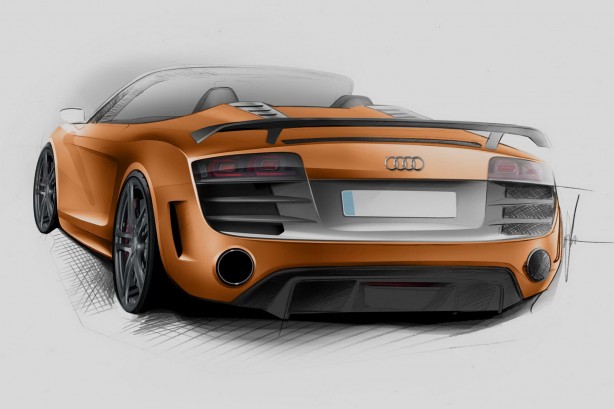 The similarities do not end here. From the sketches, we can also see that the Spyder will use a fixed rear wing, a front splitter and winglets and a massive air diffuser borrowed from the R8 GT Coupé. The drop-top R8 GT will also likely to be a limited edition like the coupé, which has a production run of just 333 units.

The R8 GT Spyder will be previewed at Le Mans, home to the famous endurance race. It is no coincidence that the place was chosen. Audi wanted to stress the important link between the Spyder and the R8 LMS race car, with which it shares some components. The car will be officially launched at the Frankfurt Motor Show in late September.