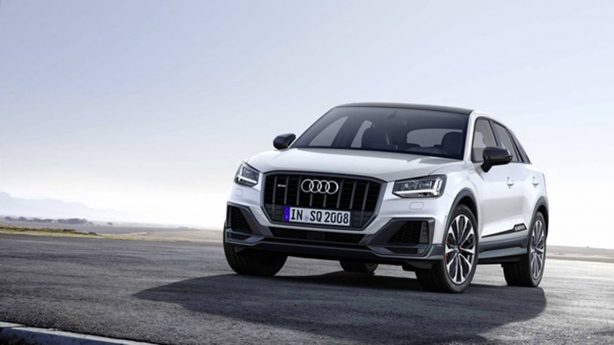 Audi has surprised the world’s media by unveiling the hot SQ2 ahead of its Paris Motor Show debut without a single teaser image.

Packed with a 220kW/400Nm petrol engine married to a 7-speed S Tronic twin-clutch transmission driving all four wheels, the SQ2 will sprint from 0-100km/h in 4.8 seconds before topping out at an electronically limited 250km/h.

If the output sounds familiar, that’s because the SQ2 borrows its 2.0-litre turbocharged four from the Audi S3.

Riding on either 18- or 19-inch wheels, the new SQ2 is 20mm closer to the ground compared to its lesser siblings, courtesy of a set of stiffer sports suspension.

To manage the extra grunt, Audi has fitted the SQ2 with bigger 340mm front and 310mm rear brakes with S-braded calipers, which can be optionally painted in red instead of the standard black finish.

Being the range-topper, the SQ2 features a raft of fancy equipment, including LED head and taillights, Audi Virtual Cockpit and racy sports seats.

Audi has released just one official photo, with more to come at the Paris Motor Show.