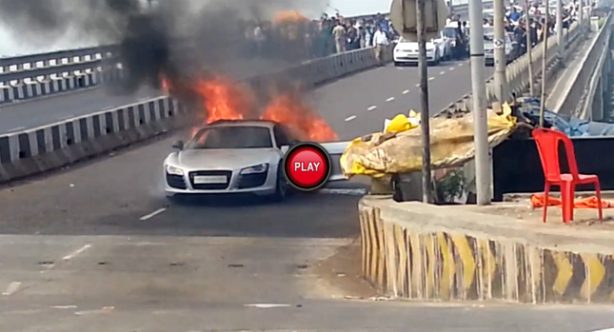 It seems Ferrari’s and Lamborghini’s aren’t the only supercars that will spontaneously combust on their wealthy owners. An Audi R8 Coupé that was part of a procession of supercars participating in the ‘Parx Supercar Show 2013’ in Mumbai, India went up in flames.

Luckily for the owner and his passenger, they escaped unharmed. Of course, the spectacle was filmed by one of the many on-lookers that lined the street for the parade.

The 23-year old driver of the ill-fated supercar, Bhavesh Thakkar, told reporters after the incident: “I’ve no idea how the car caught fire. It’s the company’s fault. I was with my friend Aditya Kapoor (22). We had gone there for a drive. Luckily, we both got out in the nick of time without injuries. I don’t know what went wrong, but I was not racing. We had given the car for repairs last week. But we have not modified the car since we bought it.”

Incidence like these are of course a PR nightmare for the company in question, Audi quickly responded via its Indian spokesperson that it will investigate the accident.

“We have been informed about the unfortunate incident and are deeply concerned about it,” said the Audi representative. “We are relieved to know the driver is unhurt. The car was not an official entry to the Supercar club weekend and initial reports indicate it had been modified. However, we will investigate the matter further to understand the possible reasons for the incident.”

Check out the video below of how the Audi R8 was engulfed in flames within a few minutes.