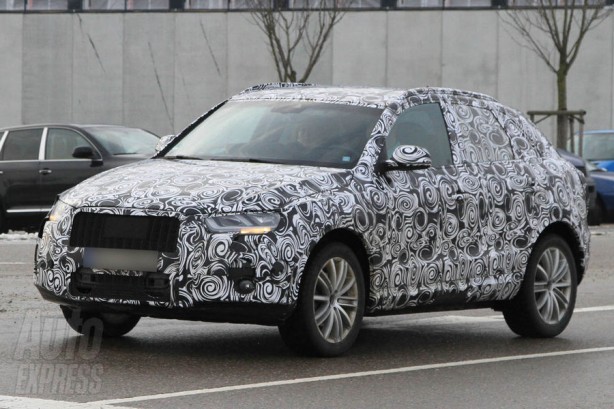 It is a well known secret that Audi has a X1 slayer in the works, and these spy shots of an Audi Q3 confirms the fact.

The junior SUV, clad heavily in what is now German manufacturers’ favourite disguise of choice, the ‘great swirls’, is out undergoing final testing before the car’s launch at the Geneva Motor Show in March.

Like all of Audi’s current line-up where the A6 looks like a smaller A8 and an A4 looks almost exactly like a scaled version of the A6, the Q3 will look like a Q5 mini-me, with a host of its bigger brother’s styling finding their way onto the Q3. There is the ubiquitous Audi grille at the front flanked by a pair A1 inspired headlights. There is also bulging wheel arches and pronounced ridges on the bonnet to complete the SUV looks. At the rear, hatch and tail lights are almost a straight lift from the A1 supermini as well.

The Q3’s underpinnings are based on the Volkswagen Tiguan with similar engine options, including a 2.0-litre TFSI with two states of tune, 125kW and 155kW. A 2.0-litre TDI engine with 125kW of power will also be offered. These will be mated with either a 6-speed manual or S-Tronic dual-clutch transmission.

The more powerful TFSI engine will sprint from 0-100km/h in just over 6 seconds, with CO2 emissions ranging from 150g/km in the most efficient to 170g/km in the least.

The Q3 will hit showrooms in Europe around the end of the year with Australian deliveries expected in 2012.