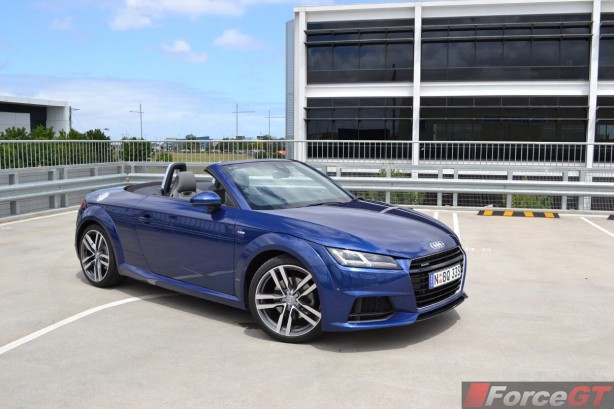 There’re practical cars for the masses and there’re performance cars for the passionate. But if style to you is everything, then there’s only one place to look – open-top sports cars.

And the Audi TT Roadster is arguably the segment’s leader. Now in its third generation, Ingolstadt’s most iconic model is showing no signs of giving up its top position.

It doesn’t matter if the roof is up or down, the TT Roadster looks sensational from all angles. While the latest exterior design continues to be evolutionary of the two preceding generations, it’s more angular and chiselled, with sharper and tauter lines. Hairdresser-ish? Now that’s something of the past. 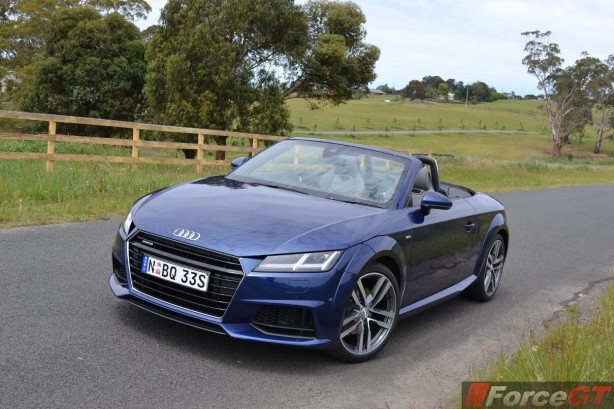 The front is especially bold and muscular, with the new grille now even wider and dominant, flanked by squarer and slenderer headlights. The Audi rings have moved to the bonnet, R8-style, lending to a lower and more aggressive nose.

The daytime running lights are a work of art, formed by two light tubes rising near vertically from a horizontal base tube. They look modern and sophisticated.

The DRL design is echoed in the taillights for an equally striking appearance. Even more impressive is the slim third brake light tucked neatly underneath the active boot lid spoiler that spans the entire width of the car, connecting the taillights. 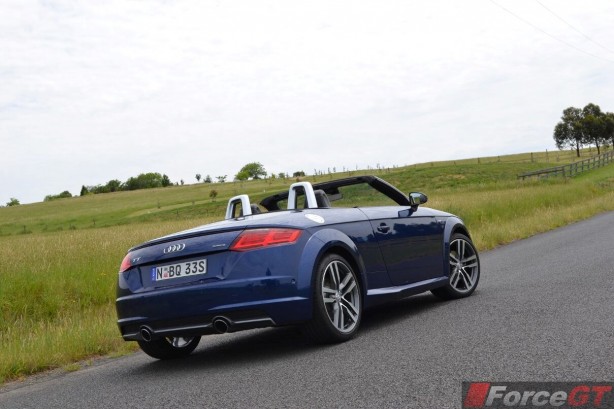 Despite being 21mm shorter than its predecessor, the new TT Roadster looks sleeker and lower thanks to the edgier styling. Its wheelbase has grown by 37mm to 2,505mm, making for especially short overhangs.

The new fabric roof descends smoother into the rear deck than before and takes just 10 seconds to open or close at the push of a button. For added convenience, it can be operated at speeds of up to 50km/h. It also features an electrically retractable wind deflector behind the headrests.

If you think Audi has nailed it with the exterior, the cabin leaves the competition even further behind. The new interior is almost concept car-like futuristic, with a low dashboard and raised centre console.

According to Audi, the rule is “less is more”, and it’s evident everywhere you look in the cabin. The air-con for instance, has its controls positioned directly in the air vents – impressive stuff. 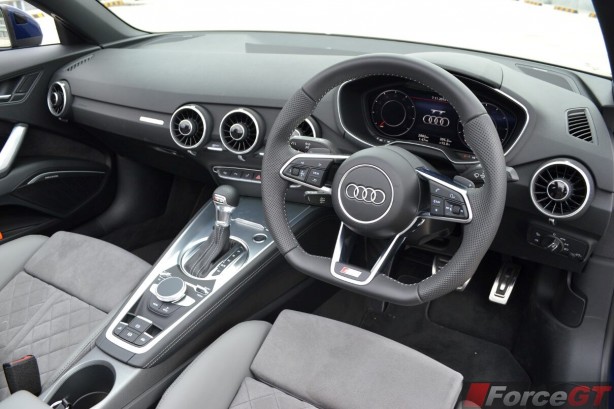 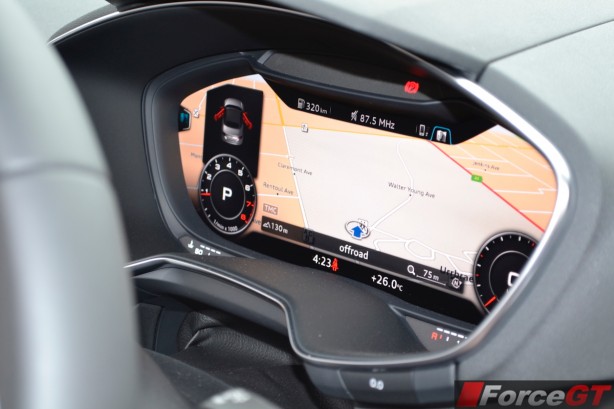 The instrument cluster and infotainment system have combined to form a central, digital unit – the so-called Audi virtual cockpit. A super crisp 12.3-inch TFT screen now dispenses all the information right in front of the driver.

The screen is powered by an Nvidia Tegra 30 graphic processor and serves up some of the best visuals we have ever seen in ultra-high resolution. Everything from sat-nav and drive modes to media playback and car settings are navigated and configured in this screen.

Our favourite part of the interior is the flat-bottom steering wheel, which is not only an absolute joy to hold, but also looks spectacular. We especially like the bottom of the wheel where two slim vertical spokes are spaced apart such that the foot pedals are visible to the driver.

Together with the rest of the cabin, the steering wheel design gives a sense of visual lightness, making the whole interior feels larger than it actually is. 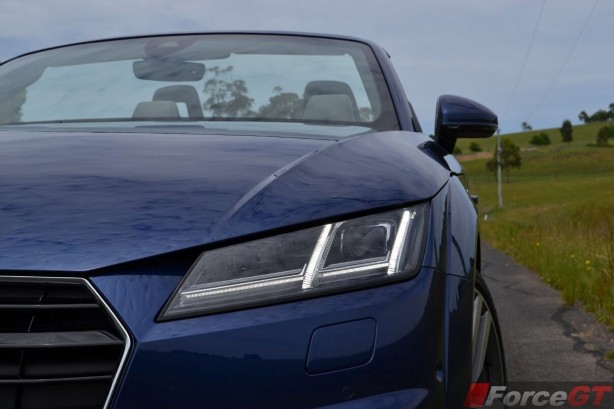 A generous application of polished and brushed aluminium trim adorns the interior – the entire centre console is topped with a single piece of aluminium, while build quality is typically Audi – class-leadingly brilliant.

The standard sports seats are comfortable and positioned lower than in the predecessor model for a sportier seating position. They are also more than 5kg lighter, according to Audi. In the optional S line trim, the S sport seats come with pneumatically adjustable side sections for better support.

As expected for a convertible, boot space in the TT Roadster is scarce. Nevertheless there’re still 305 litres of capacity, 13 litres more than the outgoing model.

The sportier S line will set you back $89,000 plus on-roads and ups the ante with S line exterior styling package, S sport seats in Alcantara and leather, 19-inch wheels, Matrix LED headlights with dynamic front/rear indicators, and premium sound system with 9 speakers and 2 subwoofers. 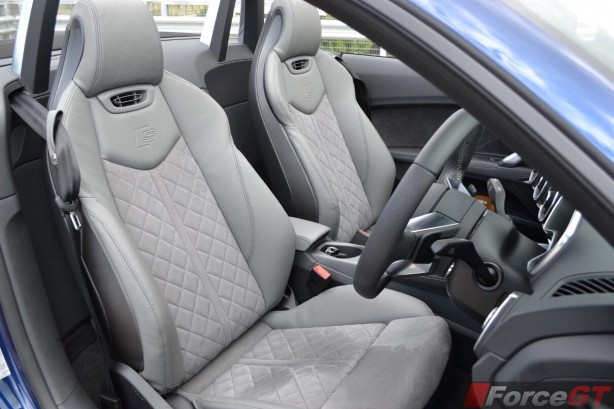 Both variants are powered by a 2.0-litre four-cylinder TFSI engine that produces 169kW and 370Nm. Paired exclusively with a six-speed dual-clutch S tronic transmission and quattro all-wheel-drive, 0-100km/h is decently quick at 5.6 seconds. Fuel economy is rated at 6.7L/100km, though our real world test saw the trip computer returning 8.1L/100km.

In normal driving, the TFSI engine is silky smooth and muted, with a light and easy persona around town. Wind it up and a satisfyingly solid growl rushes in from the bonnet. The engine musters energy from just 1600rpm – where the torque band starts to max out – and pulls strongly right through to 5000rpm for enthusiastic though not thrilling performance.

The dual-clutch shuffler provides snappy and quick gear changes, it even barks and crackles enthusiastically when shifting at full throttle. 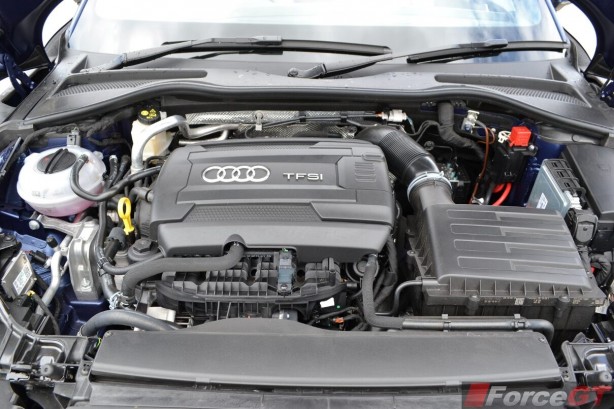 The Roadster strikes a fine balance between ride and handling. In Dynamic driving mode, the sharpest setting, the steering wheel is pinpoint sharp and adequately weighted. With an adaptive all-wheel drive hardware which actively sends more drive to the rear wheels during hard driving, the car delivers neutral and agile handling.

Front end grip is remarkable, as even when power is applied out the other end of the corner, the front end clings on for dear life. In other words, you can get on the power much earlier without worrying about the nose pushing wide.

The only complain we have about the car, dynamically, is the rather inconsistent brake feel from the pedal.

The TT Roadster is offered with 3 year unlimited kilometres warranty and 12-month/15,000km servicing intervals, which is more frequent than the 25,000km interval of its rivals.

The new Audi TT Roadster is no longer just a pretty face. It now has the on-road dynamics to match its stunning looks.

Packaged with a beautifully crafted interior equipped with next-generation features and technologies, the drop-top TT leaves the rest playing catch up.