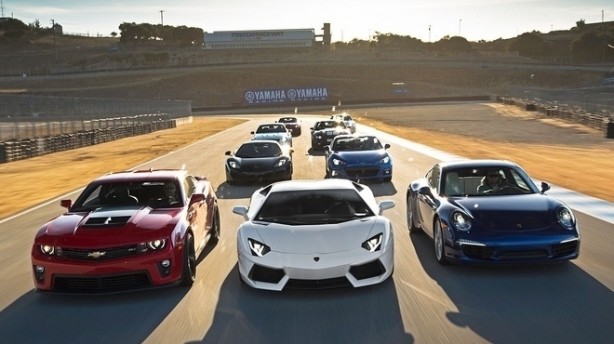 Remember the drag race between some of the world’s fastest cars that MotorTrend did last year? It was epic wasn’t it? Well the folks at MT are back with another “World’s Greatest Drag Race”!

This time the starting line includes two of 2012’s most important supercars – the Lamborghini Aventador and McLaren MP4-12C. Last year, the mighty Nissan GTR was the winner. How would it stack up against the rest of the field this year? Watch the clip to find out.

It’s back! The World’s Greatest Drag Race returns with nine of the world’s best supercars, sports cars, and muscle cars for 2012 facing off in an epic quarter-mile sprint for glory… and ultimate bragging rights! This year’s field includes all nine contenders from Motor Trend’s 2012 Best Driver’s Car competition. We have the Lamborghini Aventador, Nissan GT-R Black Edition, Ford Shelby GT500, McLaren MP4-12C, Jaguar XKR-S, Porsche 911 Carrera S, Subaru BRZ, Mercedes-Benz C63 AMG Black Series and Chevrolet Camaro ZL1 — all gathered together on an abandoned airstrip at El Toro Marine Base to find out which car is the fastest. Obviously these nine competitors display a wide range of power and performance, not to mention price tags. So why are we lining them all up again for one gigantic, over-the-top drag race? It’s simple… Because We Can!

Subaru has dropped a surprising teaser of the next-generation BRZ today, releasing a photo of …