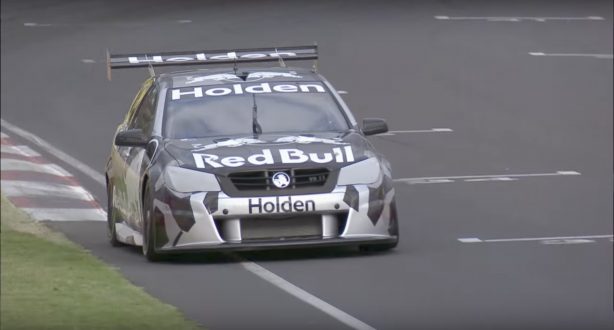 In preparation for an era without a V8 engine, Red Bull Holden Racing Team is continuing to test its new twin-turbo V6 mill, which made its debut over the weekend at Mount Panorama ahead of the Bathurst 1000.

The prototype engine was installed in the team’s one-off Project Sandman and introduced to the world with Greg Murphy behind the wheel.

“If you’re going to launch the Sandman V6 TT for the first time to the Australian public, what better place to do it than right here in Bathurst,” said Murphy.

“The noise inside the car was certainly different, it was a lot louder and tougher than I expected. The throttle response and driveability of the engine was awesome as well.”

“I really love the sound but beauty is in the eye of the beholder, so sound is in the ear of the beholder I suppose, so we’ll see what people think. “We’ve been concentrating on making the new engine more user-friendly by focusing on mapping and the power curve. It will be an ongoing process and I’d say we’ve only done about 20 percent of the work we need to.”

While diehard fans of the championship, as well as Holden in general aren’t impressed with the demise of the naturally aspirated V8, the new twin-turbo V6 in the clip still sound pretty impressive, with the pops of the turbos adding to the symphony.

Holden will still be using the current V8 for next season’s Supercar Championship, before switching to the new twin-turbo v6 engine for the 2019 season.