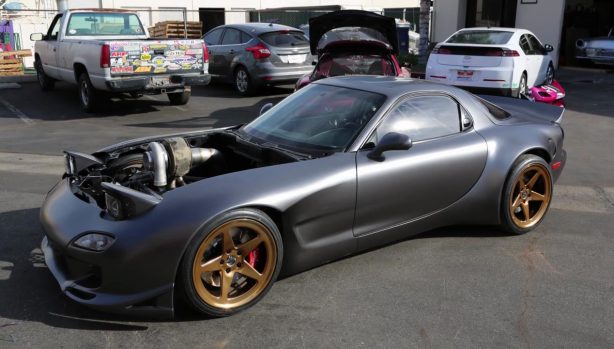 Recently unveiled at SEMA 2016 is quite possibly one of the most ambitious RX7 builds ever attempted. Rob Dahm is no stranger to the charm of Mazda’s rotary vehicles with his 600hp (441kW) + 20b powered RX7 but Project Ahura is in another league. The goal was to build a car without compromise that was balanced and responsive all while maintaining Mazda’s spirit. To achieve this goal some of the most well respected workshops and companies from within the industry have come together and put forth their expertise.

The turbo is a Garrett GTX 5533R, with its 98mmm Compressor inducer blade capable of producing 1300hp – 1500hp (956 – 1,103kW) at the wheels once running. Weighing in at almost 30kg and originally designed for caterpillar earth movers, Garrett specifically recommended this turbo for the 4 rotor application to meet the power targets Rob is aiming for.

How do you get that much power to the ground in a car that’s traditionally RWD? The solution is to re-engineer everything into a 4WD package with massively wide wheels and rubber to boot.

The front end of car is a tube frame chassis featuring custom guards housing Hoonigan engineered double wishbone suspension complete with inboard cantilever dampers as used in their Hoonicorn. The rear end has had the widebody treatment and a set of Vossen LC101 wheels sit at each corner covering an equally impressive set of Willwood brakes.

Keen eyes will note that the car has an elongated front end compared to standard RX7’s, a necessity to fit the engine, turbo, additional differential and all required cooling needed.

Project Ahura is a massive build and more details of the process will be unveiled as SEMA 2016 continues. 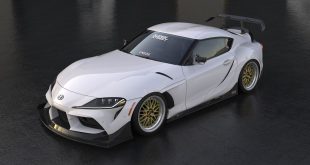 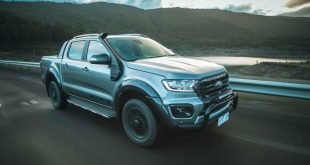 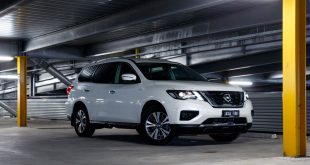 Aging it may be, the Nissan Pathfinder is not out of touch, yet. Big seven …