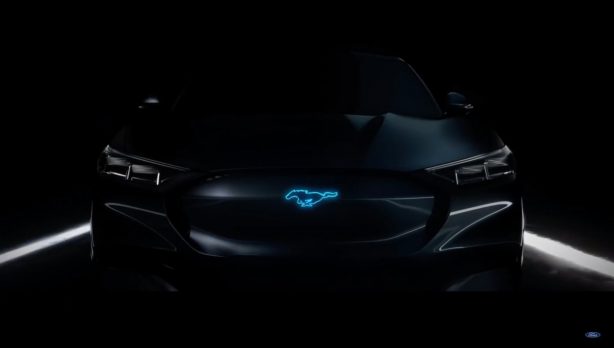 Ford has released a teaser of what appears to be an electrified version of its Mustang sports car, complete with a glowing blue pony badge and closed grille.

While we can’t confirm if the car shown is the new hybrid Mustang, what is almost certain is the car will features some form of electric drivetrain.

This comes as no surprise as Ford has previously said it will introduce an electrified Mustang next year with a hybrid powertrain that produces as much as power the naturally-aspirated 5.0-litre V8 of today. That means we can expect around 339kW and 556Nm of torque from the hybrid.

However, before you get your hopes up, Ford has also announced at the Detroit Auto Show earlier this year that it will be unveiling a new, all-electric performance SUV in 2020 linked to the ‘Mach 1’ name. Some of you might recall the Mach 1 badge was synonymous with high-performance iterations of the pony car in the past.

Therefore, the car in the teaser could potentially be Ford’s upcoming all-electric SUV, and not a hybrid Mustang.

Whatever it is, one thing is for sure. Electrified propulsion appears to be the way of the future.

Previous Report: Toyota may revive the Celica or MR-2
Next 2019 Audi R8 unveiled with more potent V10 and sportier styling