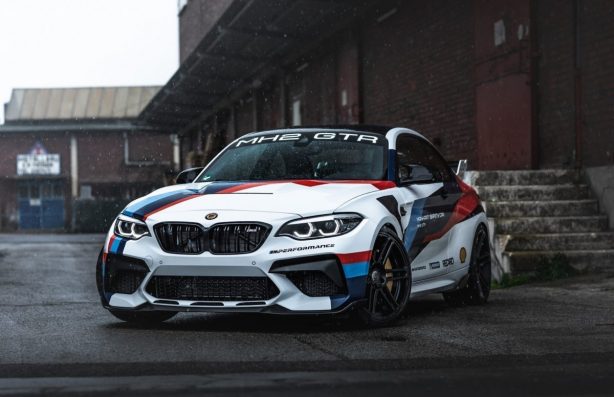 The BMW F87 M2 CS is already a capable track machine straight out from the factory, but that did not stop BMW tuning specialist Manhart Performance from upping the ante even further.

Their latest project, the Manhart MH2 GTR is based on the M2 CS and follows on the same approach as the tuner’s other project car, the M4 DTM Champion Edition-based MH4 GTR. And the resemblance to its bigger brother is immediately evident, from the motorsport livery to the track focused upgrades. The coupe is fitted with a front splitter, front fender vents, side skirt extensions, and an adjustable rear spoiler, all made from carbon fibre.

At the heart of the MH2 GTR is the BMW M 3.0-litre twin-turbo in-line six cylinder engine, which in factory form produces 335kW and 550Nm. The Manhart treatment sees the engine upgraded with a turbo performance kit and larger intercooler by CSF. It also breaths through a new carbon fibre intake from ARMA and exhale through a full stainless steel exhaust system with valve control.

To extract the most out of these goodies, the engine management gets a Manhart ECU remapping, which pushes power to a whopping 447kW, accompanied by a colossal 830Nm of torque. To ensure efficient transfer of power to the rear wheels, the 7-speed double-clutch transmission (DCT) has also been strengthened with a Manhart transmission upgrade kit. 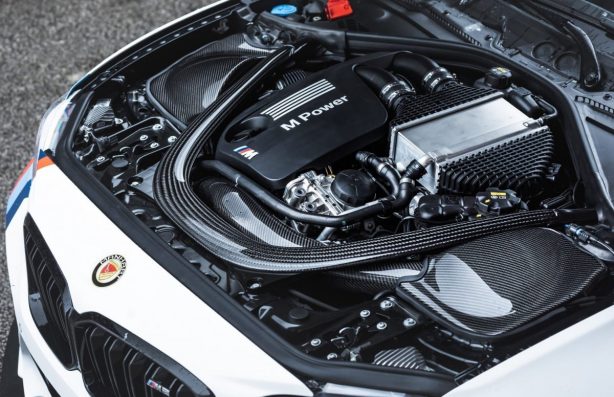 Helping the MH2 GTR achieve even more agility and cornering dynamics are the Manhart Suspension Upgrades by H&R, with in-house tuning as well as the in-house produced, Concave One forged wheels in matte black. The wheels measure 9 × 20 inches at the front and 10.5 x 20 inches in the rear, respectively wrapped with Michelin Pilot Sport Cup 2 tyres measuring 255/30ZR20 at the front and 295/25ZR20 in the rear.

On the inside, Manhart has thrown in a set of Recaro sports seats, and carbon fibre steering wheel spokes and gear selector lever from the BMW M Performance program. A data display is also integrated into the driver’s side air vent to provides the driver with various driving values and engine parameters.