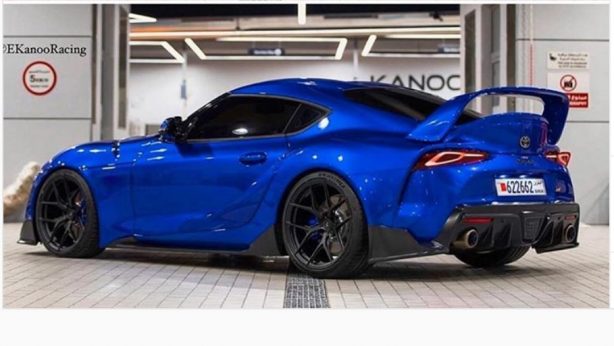 Just when we thought the Toyota GR Supra tuned by TRD could not get any hotter, here’s one to prove us wrong from Bahrain-based tuner Kanoo Performance.

And all it takes is the big curved wing from the mk4 Supra to spice everything up by a notch. Lifted straight from the previous mk4 Supra of the 90s, the wing that made the Supra such an icon seems to be a perfect fit for the new GR Supra, so much so that it actually looks quite original. There’s really no better way to pay homage to its predecessor by retaining its wing.

The rear spoiler looks especially good when paired with an array of TRD goodies on the TRD GR Supra including an eight-part aerokit made entirely from carbon fibre.

Around the back, there are rear spats just behind the wheels with even larger fins than those at the front and sides. Further pumping up the looks, this particular GR Supra has been fitted with a set of 20-inch Vossen wheels in place of the TRD’s forged 19-inch alloy wheels.

With a weight distribution of almost 50:50, the fifth-generation A90 Supra is powered by a turbocharged 3.0-litre straight-six engine produced by BMW with outputs of 250kW and 500Nm. Paired exclusively to an eight-speed torque converter automatic and rear-wheel drive, it’ll send the Supra from 0-100km/h in 4.3 seconds, before pushing on to a limited top speed of 250km/h.