When it comes to the maddest Police street weapon, we have seen a fair share of them here in Australia, such as the BMW M5, Mercedes-AMG E 43, Audi RS4, Honda Civic Type R and Tesla Model X. But here’s something fresh from Germany. Unveiled at a nationwide ‘Tune it! Safe!” campaign for safe and approved vehicle tuning, this fully done up BMW M850i coupe is surely one police car any street racers don’t want to run into on the streets.

Modified by established German tuning house AC Schnitzer, the M850i police pursuit vehicle has been upgraded with a host of go-fast goodies, all properly installed and roadworthy tested to encourage a safe tuning culture amongst enthusiasts. 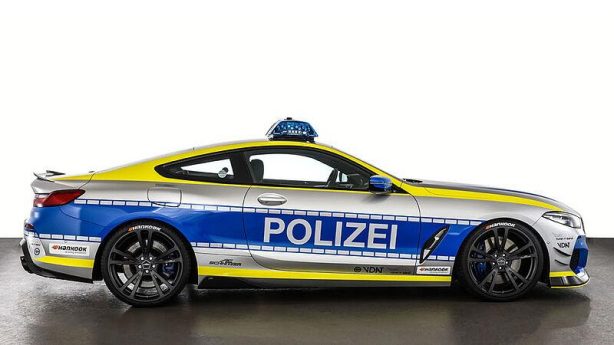 The AC Schnitzer treatment sees the M850i churn out a fire-breathing 460kW / 620hp through chip tuning and upgrades to the cooling, intake and exhaust systems. To ensure environmental noise compliance, the AC Schnitzer exhaust system features two silencing flaps which are closed at low speeds to quiet the exhaust note.

While no official performance figures have been released, the added punch should trim the modded M850i’s century sprint time down to around 3.5 seconds. 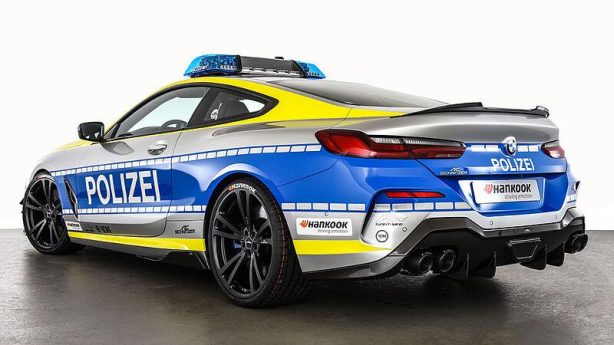 To cope with the extra power, AC Schnitzer has tightened the handling of the M850i with a coilover lowering suspension kit that drops the ride height by 20mm at the front and 25mm at the rear. The subtle drop remains road legal while allowing the wheel arches to more tightly wrap the lightweight AC Schnitzer AC3 wheels. Coated in matt grey, the performance rims measure 9.0 x 21″at the front and 10.0 x 21″ at the rear. Sending power down to the tarmac are Hankook Ventus S1 Evo 3 tyres measuring 255/30 R21 and 295/25 R21 front to rear.

The AC Schnitzer package also includes a body kit which beefs up the looks of the M850i with a front splitter, a pair of front canards of each side, side skirts, rear diffuser and rear spoiler. All aero parts are made entirely of carbon fibre.

Of course, no police car is complete without the eye-catching police vinyl and blue and red flashing lights. And so the AC Schnitzer M850i wears the official German police vinyl and is installed with a RTK 7 Proflash warning lights from Hella.