Video: Driver crashes A90 Toyota Supra into tree after flooring it 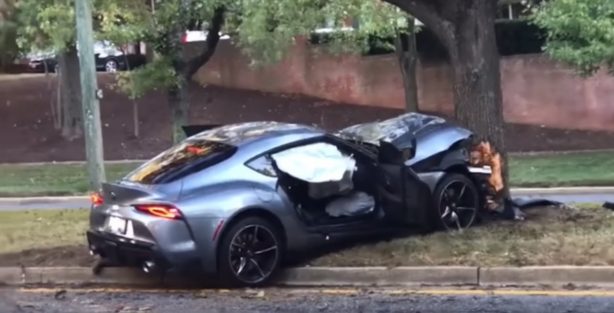 It’s bound to happen sooner or later but the first ‘amateur’ video footage of the A90 Toyota Supra crashing is upon us.

Captured by the passenger on his phone who appeared to be monitoring the car’s performance on an app, the footage shows the moment the driver floors the accelerator causing the rear wheels to bring traction, sending the Supra Launch Edition into a slide and headed straight at a tree.

It all happened in a split second and as you can see from the images and the video, the impact was severe and the car is likely a write off. Luckily, the crumple zones and airbags worked as intended and both occupants escaped alive, although the passenger reportedly suffered more serious injuries.

While it’s purely speculative, it is possible the driver might have switched of the car’s electronic stability control judging by the sudden lost of traction, which isn’t the wisest thing to do on a powerful, rear-wheel-drive car.

As for why the owner suddenly floored the throttle, a Facebook post before the crash might give you an idea: “Out here tune’n my mk5 🔥y’all ain’t ready…” Perhaps he wasn’t, either.