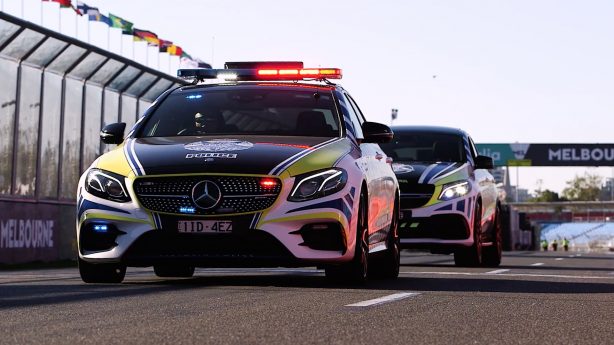 Here is something you do not want to see in your rear view mirror if you have been speeding. Victoria Police today welcomes one of the fastest saloons in the world to its fleet, a Mercedes-AMG E 43, as it hosts police from across the State for the Towards Zero Road Safety Conference 2017.

The AMG sports sedan, called the Guardian V2, replaces last year’s Mercedes-AMG GLE 63 Coupe as an operational highway patrol car and is on loan to Victoria Police for the next year. Road Policing Command Assistant Commissioner Doug Fryer said the Guardian has an extensive range of innovative safety features.

“It couldn’t be a more perfect time to unveil the second Guardian at the conference where innovation, safety and the future direction of road safety will be at the forefront of everyone’s minds,” he said.

“Our partnership with Mercedes-Benz is about highlighting safety features in vehicles; we want to be part of the discussion around what safer cars look like and know that having the Guardian V2 out and about in the community does this.

“Operational members will use the car to patrol the roads; will show the car at community events, it is important to us to highlight what real safety looks like and to have conversations with community around this.

“We know that three out of four deaths on country roads happen in cars that are older than 10 years and that a new car will stay on our roads for about 20 years.

“So the quicker we see these advancements in technology in our new cars the quicker it will be passed down to our teenagers, to our most vulnerable, when they are buying their second hand cars.

“All we are asking is that you consider safety for your car as an investment, an investment in the safety of yourself and for your family, it shouldn’t be an optional extra.” 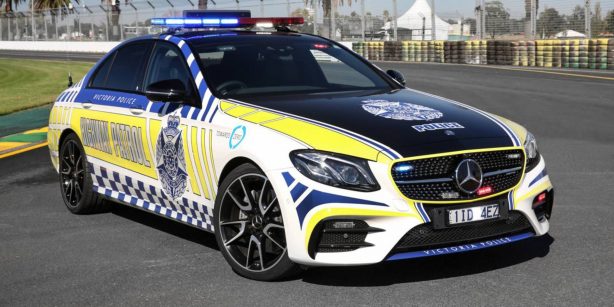 With the imminent demise of the locally built Holden Commodore and Ford Falcon sedans, the Australian Police Force have been hunting for a successor to replace their V8-powered Commodore and Falcon pursuit vehicles. And the Mercedes-AMG E 43 certainly packs more than enough fire power for the task.

Priced from $159,900 before on-roads, the AMG E 43 is the most powerful E-Class for now, before the full fat AMG E63 S arrives later this year. It features a 3.0-litre twin-turbo six-cylinder engine producing 295kW of power and 520Nm of torque driving all four wheels via Mercedes’ 4MATIC system, enabling the sports sedan to hit 100km/h in just 4.6 seconds from rest.