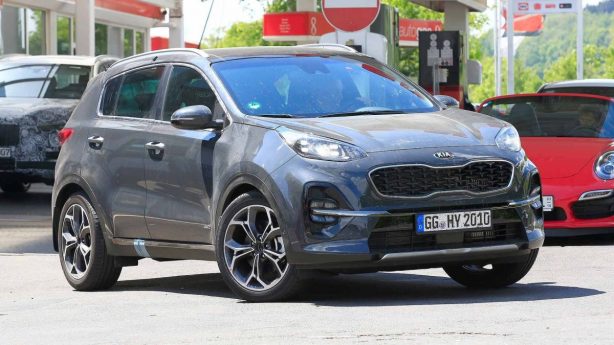 The facelifted 2019 Kia Sportage has been spotted completely undisguised leaving a petrol station near Nurburgring in Germany.

Due to launch in late 2018, the new Sportage can be seen sporting a new front fascia with revised bumper design and full LED headlights. At the rear the mid-size SUV features a new single strip taillight that stretches across the entire rear. Like the front, the rear bumper has been redesigned with more chrome garnish. 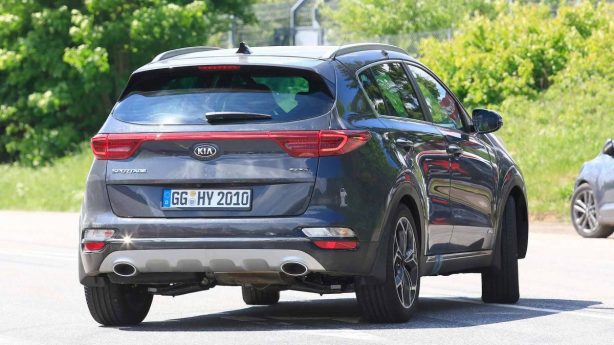 But the big news is Kia’s upcoming new 48V diesel mild-hybrid powertrain that is expected to debut with the updated Sportage. The new ‘EcoDynamics+’ setup is designed to reduce CO2emissions by supplementing acceleration with electric power from an additional 48-volt battery and extending combustion engine ‘off time’ using a new Mild-Hybrid Starter-Generator unit.

In ‘motor’ mode the battery is discharged under acceleration, providing additional torque to the engine for a slight boost in performance under hard acceleration, or to reduce engine load during light acceleration. Under deceleration, or when driving downhill or towards a junction, the MHSG switches to ‘generator’ mode, recuperating energy from the crankshaft to recharge the battery on-the-go. 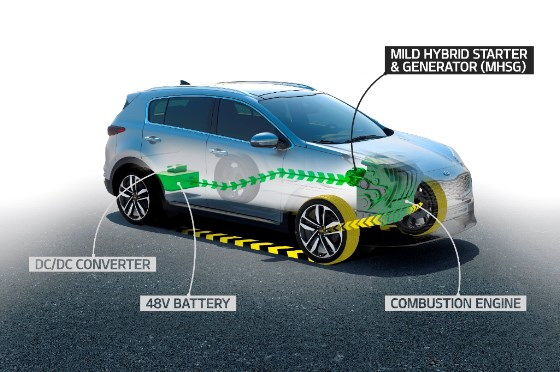 Battery power can also be used to provide a new ‘Moving Stop & Start’ function. If the battery has sufficient charge, the combustion engine turns off automatically during in-gear deceleration and braking. The MHSG can then seamlessly re-ignite the engine – in any situation – if the driver presses the throttle pedal.

The 2019 Kia Sportage will be the first model to offer the new EcoDynamics+ diesel mild-hybrid powertrain, followed by the new third-generation Kia Cerato from 2019.