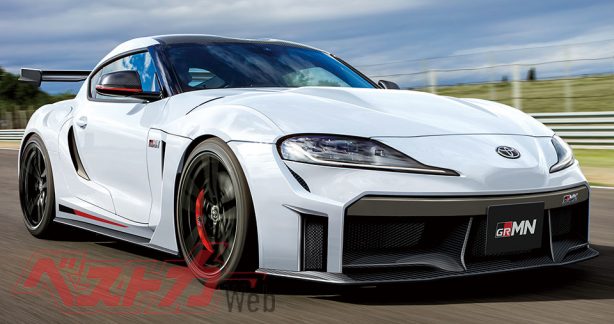 The Toyota GR Supra received a power upgrade late last year, with its BMW-sourced 3.0-litre turbo in-line six engine retuned to produce a maximum power of 285kW between 5800rpm and 6500rpm. Peak torque remains the same at 500Nm but is delivered over a broader rev range between 1800rpm and 5000rpm.

But the most potent version of the GR Supra is yet to be upon us. The upcoming Supra GRMN will be the top dog when it arrives sometime next year, and now fresh juicy details of the hardcore Supra have surfaced.

According to Japanese publication BestCarWeb, the Supra GRMN will launch in strictly limited numbers worldwide, with each said to be powered by the same engine found under the bonnet of the new BMW M3 and M4. The BMW 3.0-litre twin turbo in-line six engine will motivate the Supra GRMN with a potent 353kW of power and 550Nm of torque, some 68kW and 50Nm more than the standard car. 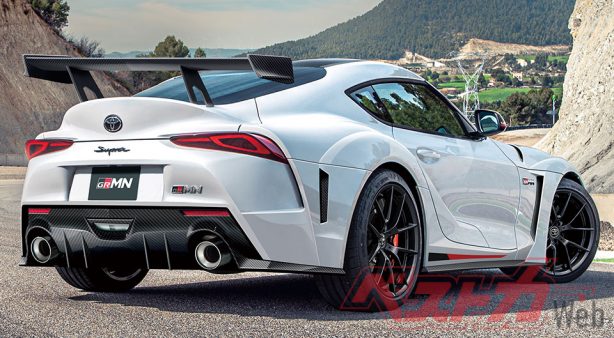 Toyota is expected to make its own engine tuning to suit the Supra GRMN’s track focused attribute, but even more excitingly, the engine is said to be paired with a 7-speed dual-clutch transmission (DCT). In place of the 8-speed torque converter automatic in the standard GR Supra, the BMW-sourced 7-speed DCT will certainly change the way the Supra drives – in a good way. Still, there’s no news on whether we will ever see a manual gearbox in the Supra.

The Supra GRMN will retain the standard car’s rear-wheel drive configuration. With the GR Supra capable of sprinting from 0 to 100km/h in 4.2 seconds, expect the Supra GRMN to shave around two-tenths of a second off that time to stop the clock in just 4 seconds.

The Supra GRMN will also likely be put on a strict diet, shedding weight through the use of carbon fibre components. There will be extra body strengthening to make the track-oriented model stiffer than the standard car, along with an upgraded suspension to cope with the extra power.

While we have so far yet to see official images of the upcoming Supra GRMN, BestCarWeb is giving us a glimpse of what to expect with this hot rendering. It features a beefed up front bumper, side skirts, bonnet vents and a rear wing spoiler. We like what we see here, but we can’t wait to see the final product.