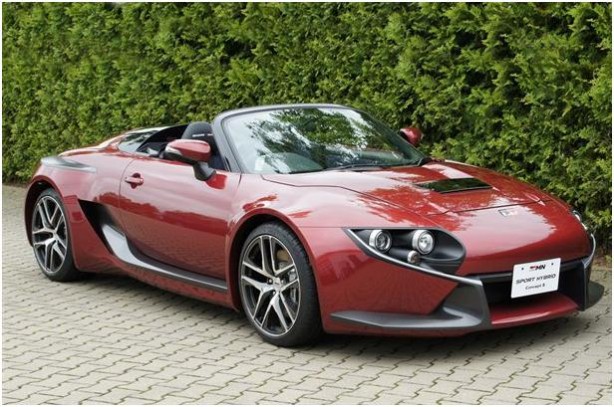 With the FT-86 in its final stages of development, resources at Toyota are gradually liberated and redirected to the maker’s ‘other’ sports car, the little known GRMN Hybrid Convertible.

First made its public appearance at last year’s Tokyo Auto Salon, Toyota has confirmed that it is “considering a production version” of the car. To that end, a revised version of the same car will be revealed at this weekend’s Nürburgring 24-hour endurance race.

Unlike the rear-driven FT-86, the GRMN is all-wheel drive, with a mid-mounted V6 petrol engine driving the rear wheels, whilst an electric motor borrowed from the Lexus RX450h drives the front. Like all hybrids, the sports car can cruise in EV mode in near silence around the city.

The V6 engine is Toyota’s familiar 3.5-litre unit currently serving various models from the Camry to the RX. It outputs 246bhp (181kW). When combined with the electric motor, the car produces a maximum output of 295bhp (217kW). Compared to the first iteration, the revised GRMN Hybrid is 200kg heavier, tipping the scales at 1500kg.

The race car also sports revised styling compared to the show car. The front bumper will be thoroughly redesigned with a more aggressive front spoiler. The headlights are no longer enclosed and completed by a sharper nose.

The GRMN SPORTS HYBRID Concept II is an updated version of a petrol-electric sports concept shown at Tokyo Auto Salon in 2010. The vehicle features advanced styling and an improved sports-hybrid AWD system with the main power unit (petrol engine, rear-wheel drive motors and transmission) mid-mounted in conjunction with a front-wheel drive motor. Positioned this way it improves manoeuvrability, increases driving enjoyment and provides enhanced stability.
Toyota launched the world’s first mass-produced petrol-electric vehicle, the Prius, in 1997, and has long conducted active research on applying hybrid technologies to racing and sports cars. The GRMN SPORTS HYBRID Concept II is the next step in the evolution of these efforts.

2 Stands for “Meister of Nürburgring”, referring to Hiromu Naruse (1944-2010), a TMC test driver and chief of the GAZOO Racing team.