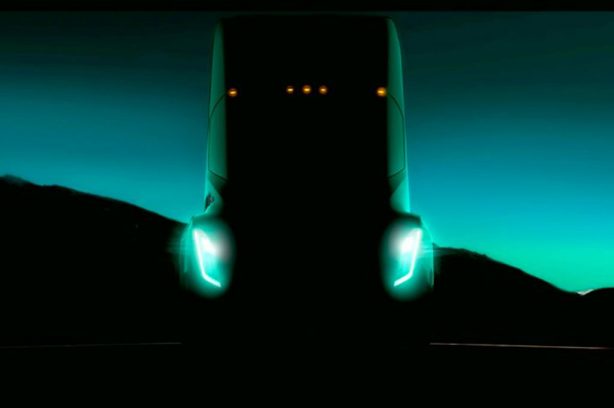 After rolling out full electric roadster, sedan and SUV, Tesla’s next model in the pipeline is apparently a semi-truck. The tech-giant’s CEO Elon Musk confirmed the upcoming semi-truck during a TED Talk session, when a teaser showing the front of the full electric truck was unveiled.

The shadowy image shows only the frontal silhouette of the truck, which features striking headlights and no rear view side mirrors. Musk stated at the talk that a working prototype has already been produced and that he’s had the opportunity to test drive it. He went on by saying the prototype Tesla truck “feels like a sports car”, and that it will be capable of long hauls, though he stopped short of elaborating its estimated range.

The Tesla semi-truck is scheduled for debut this September and will likely feature the company’s Autopilot self-driving technology. Tesla isn’t alone in the autonomous truck space, as Otto (Uber owned) unveiled last year the world’s first self-driving truck which could potentially see the company offering driverless transportation and delivery services to customers.

Full details of Tesla’s electric semi-truck will be released on its debut in September.