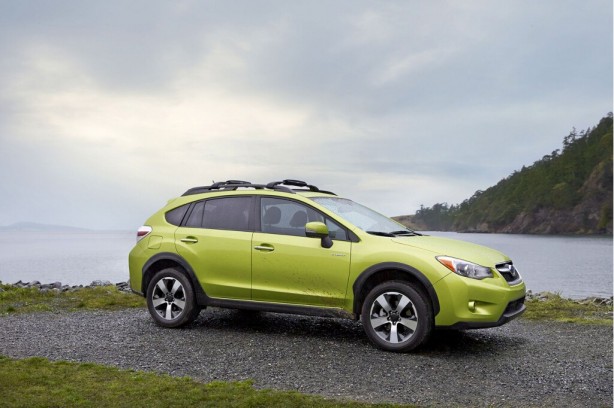 Subaru has unveiled the XV Crosstrek Hybrid at the 2013 New York Auto Show. The new hybrid XV crossover is the first-ever production hybrid vehicle from Subaru.

Based on the XV, the hybrid version is powered by a 110kW/196Nm 2.0-litre Boxer engine assisted by a 13.4hp (10kW) electric motor that is integrated into Subaru’s new Lineartronic® Continuously Variable Transmission (CVT). The electric motor gets its power from a 100v, 13.5kW nickel-metal hydride battery located under a revised rear floor pan. Despite the added components, the XV Crosstrek Hybrid’s interior space is not compromised and it weighs only 136kg more than the standard non-hybrid XV. 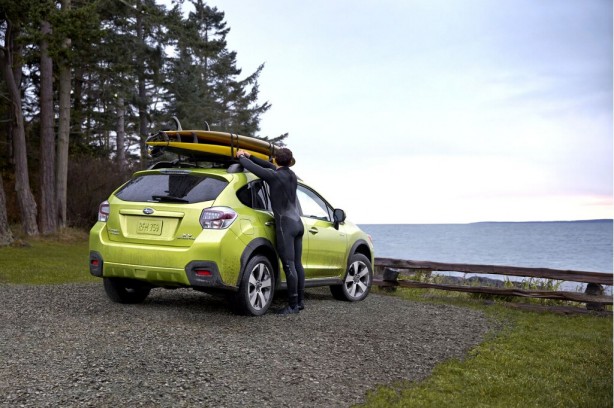 Full press release after the jump.

New York –  Subaru of America, Inc. today unveiled the brand’s first-ever production hybrid vehicle, the Subaru XV Crosstrek Hybrid, at the 2013 New York International Auto Show at the Jacob K. Javits Center. Based on the popular XV Crosstrek crossover introduced for 2013, the 2014 XV Crosstrek Hybrid model arrives in Subaru dealerships fourth quarter of 2013. When the XV Crosstrek Hybrid goes on sale it will be the most fuel-efficient and lowest-emissions AWD hybrid crossover in America.

In developing its first-ever hybrid, Subaru chose one of its popular, go-anywhere crossover vehicle platforms. As a result, the new XV Crosstrek Hybrid offers all the capability and versatility of the gasoline XV Crosstrek. The added benefits of a hybrid powertrain, including higher fuel efficiency, broaden the vehicle’s appeal. Key to this approach is that the XV Crosstrek Hybrid shares the gasoline model’s Symmetrical All-Wheel Drive and chassis capability. For example, the 8.7 inches of ground clearance is the same as for the gas model and is higher than for some dedicated SUVs, while providing a low step-in height.

The Subaru XV Crosstrek Hybrid combines a 2.0-liter Subaru BOXER engine with a 13.4-hp electric motor that’s integrated into the Lineartronic® Continuously Variable Transmission (CVT). A 100v, 13.5kw nickel-metal hydride battery is located under a revised rear floor area, and the engine uses and integrated starter/generator for the automatic start/stop feature. The compact hybrid system weighs just 209 lbs. and places the electric motor just behind the transmission and in front of continuously variable transfer clutch. With the addition of all the new features, the XV Crosstrek Hybrid weighs approximately 300 lbs. more than the gasoline engine XV Crosstrek.

Same Capability and Utility as Gas Model
Significantly, the 2014 Subaru XV Crosstrek Hybrid builds upon the utility and versatility of the gas model, while also offering enhanced handling responses and quieter driving performance.

The Active Torque Split version of Symmetrical AWD provides the same operation and benefits as in the gasoline model. The system sends power to the four wheels all the time and adjusts the torque distribution in response to acceleration, cornering and road conditions.

Passenger cabin room in the new XV Crosstrek Hybrid is essentially the same as in the gas model (0.7 cu. ft. difference), while the hybrid’s maximum cargo room (rear seatbacks down) measures 50.2 cu. ft., vs. 51.9 in the gas model.

In addition to optimizing the 2.0-liter FB-series BOXER engine to reduce internal friction, Subaru applied a number of other efficiency-enhancing technologies to the XV Crosstrek Hybrid. An Auto Start/Stop system shuts down the gasoline engine when the vehicle is stopped. Brake regeneration works when the car is coasting or the driver has applied the brake, recapturing kinetic energy from the turning wheels to recharge the battery.

Sophisticated Appearance
In addition to the different wheels, exterior enhancements readily differentiate the Subaru XV Crosstrek Hybrid from the gasoline model. “HYBRID” badges appear at the front edges of the front doors and on the tailgate. A new Plasma Green Pearl exterior color, exclusive to the XV Crosstrek Hybrid, spotlights the vehicle’s environmental character.

Inside, the Subaru XV Crosstrek Hybrid features a clean, cool blue theme with silver trim to underscore the advanced hybrid engineering. The instrument cluster, exclusive to this model, uses gradations of the blue color scheme to provide a sense of depth.

The Color Multi-Function Display shows the hybrid system’s energy flow according to driving conditions. Using switching screens, the display was designed to combine driving operation information with entertainment content, and its screen can be easily viewed from any seat.